Okay, so I am still relatively new to iNaturalist, but I am a pepper enthusiast and decided to go in and start identifying all of the cultivated pepper species that I knew for certain and of course, flagging about 90% of the observations as Captive/Cultivated because most people are just observing plants they grow in their garden (I have a few on my account that I posted as captive for species references) or posting pictures of fruit they bought at the store, most of which is Capsicum Annuum and Capsicum Chinense, however, I’ve run into an issue for obvious cultivated Capsicum Baccatum plants… 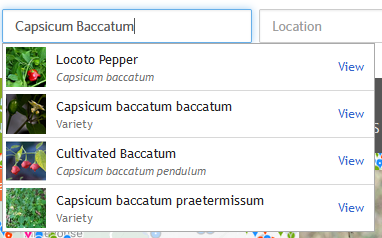 Now, to my knowledge most (but not all) cultivated Baccatum peppers are Capsicum Baccatum var Pendulum

How would you tell these three species apart?

All taxa you mention is one species, so if you id it as pure species with no var. that’s more than enough.
Sorry that your topic was automatically hidden, saw it happen when writing.

if Capsicum Baccatum var Praetermissum is the same as “Capsicum Praetermissum”, does anyone have any further information about it possibly being renamed to Capsicum Rabenii?
It was mentioned in a pepper breeding group a few months ago but I have not been able to find a source for it, but figured it might be a scientific paper behind a paywall.

Yes, I found the article, which came out this year. It is open access and free to read, Monograph of wild and cultivated chili peppers (Capsicum L., Solanaceae). The relevant section on pp. 281-282 reads:

When Heiser and Smith (1958) described C. praetermissum, they stated that none of the species of “Flora Brasiliensis” (Sendtner 1846) matched with their new species; they did not realise that the description of C. rabenii fitted very well with C. praetermissum in the pubescence of leaves and shape of the corolla, characters clearly observable in the type collections of both species. Hunziker (1971) proposed C. praetermissum as a variety of C. baccatum and he recognised C. rabenii as synonym of his new varietal name. Hunziker preferred to use the epithet praetermissum because of the valuable and unequivocal information that Heiser and Smith (1958) provided on this plant. According to the ICN (Art. 11.2, Turland et al. 2018), Hunziker could use the name praetermissum because rabenii was in a different rank and, consequently, the epithet rabenii passed into oblivion. Since then, many authors have spread both names C. praetermissum and C. baccatum var. praetermissum in literature and on herbarium specimens. Enzymatic (McLeod et al. 1983b), cytogenetic (Moscone et al. 2007) and molecular studies (Kochieva et al. 2004; Ibiza et al. 2012; Carvalho et al. 2014; Carrizo García et al. 2016), plus the clear morphological characters discussed above, provide more than enough evidence that C. baccatum and C. praetermissum are distinct species. As C. rabenii has priority over C. praetermissum, the first becomes the correct name for this species, despite the previous more common usage of the latter in both literature and on herbarium sheets.

In short (if I understand this correctly), it was originally named C. rabenii, but that name fell out of use while it was considered a variety of C. baccatum (that is, var. praetermissum). But now that it’s considered a full species again, the rules dictate that the original name needs to be used, not “C. praetermissum”.

It is generally iNat’s policy to follow Plants of the World Online for their plant taxonomy, so that name change will come into affect here when/if it makes it onto POWO.

For what it’s worth, POWO’s database doesn’t agree that the name C. rabenii refers to the same species/variety of pepper as C. praetermissum / C. baccatum var. praetermissum. Instead, they list it as a synonym of the species C. villosum. If this is true, then C. praetermissum would keep its name. I’m not a botanist at all, and I have no ability to evaluate whether the new paper presents compelling evidence to change the name.

Just to add to the complexity . . . . Normally, Capsicum rabenii would have priority over C. praetermissum at the species level. However, if the name Capsicum praetermissum (not just C. baccatum var. praetermissum) has been used extensively as the species name and C. rabenii was for a long time forgotten, one could petition the International Committee for Botanical Nomenclature to conserve C. praetermissum over C. rabenii. There is a procedure for doing this, with the purpose of stabilizing nomenclature.

I suspect, though, that by the time somebody gets around to doing this, C. rabenii will be in use again often enough that such a petition will fail.