Has anyone ever seen a species of Assassin Bug in the Chinemesa genus?? just curious on if it is like a “unicorn” or possibly very incredibly rare or recently extinct.

Do you have an iNaturalist account (your profile does not say)? If so, you could log into iNaturalist.org and do a search for that species to see where and when it was observed.

it has not been observed which is why i am asking lol, my inat is Anycade1

https://www.researchgate.net/publication/338700411_First_record_of_Chinemesa_Wygodzinsky_Hemiptera_Heteroptera_Reduviidae_Emesinae_from_China_with_the_description_of_a_new_species
Check this article, the genus was thought to be endemic to an island, it’s poorly studied because almost none were ever found: 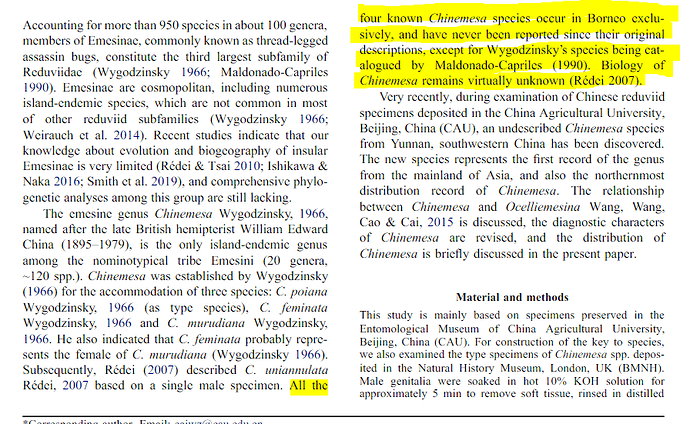 So there is 5 species now?

It appears to have been sighted in 2020.

As it is endemic to Borneo, you may wish to use the map function on iNaturalist to search the Malay specifically for all assassin bugs. You may find one miscategorized or uncategorized that appears to be what you are seeking. It is an extremely long shot but probably you will have a better chance of success than asking here as not all users on iNaturalist participate on the forums.

Nonetheless, it would appear to be quite rare as the 2020 sighting was the first documentation in some decades.

I reallyreallyreally like assassin bugs. I had a Phymata live out its life in my garden and seeing it each day was a highlight. I named him “Steggie”. Here he is:

Yes. It’s a good question if any works to try and find them were done before on Borneo, those bugs are hard to spot, so it’s easy to see how they could be missed, but when it happens for decades it’s intriguing. But Borneo also is still quite a wild place, so there may be more problems than just lack of scientists and inconspicuous species. With observations, now there’re 16 of them on the island with none ided even to genus, so likely either taxonomy there wasn’t revised or we have no experts on iNat yet.