Community Taxon: "Cumulative IDs" does not match number of IDs at that rank

This is either a bug in the language chosen for an important question in the UI, or it is a bug in how iNaturalist handles the answer to the question.

Two people had marked an observation as Trachelas. I was not convinced that it was Trachelas, thinking it’s possible it could instead be Meriola. However, I wasn’t sure if someone was seeing a diagnostic character that I wasn’t seeing.

So I entered the family Trachelidae as my ID. I was then asked, “Is the evidence provided enough to confirm this is Genus Trachelas”? My options were:

I selected (A), not sure whether someone was noticing a character that I was not. When I submitted, iNaturalist reported that 3 of 3 people confirm that this is genus Trachelas.

So either options (A) and (B) are incorrectly worded, or iNaturalist is assigning the wrong behavior to the selection of option (A). If I do not confirm an ID, iNaturalist should not count it as an additional confirmation.

iNaturalist reported that 3 of 3 people confirm that this is genus Trachelas.

Hi Joe - can you share a screenshot of where it said this? 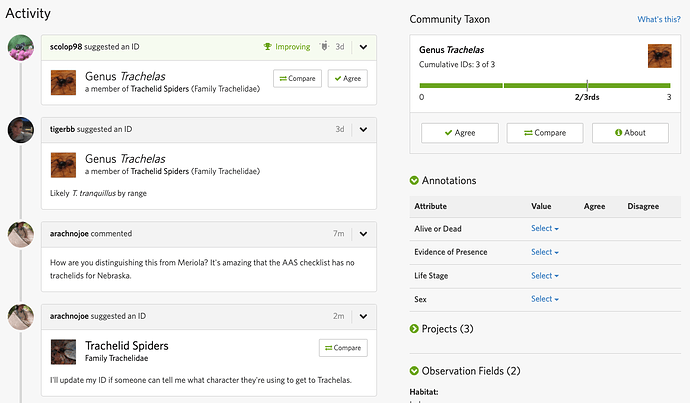 From that screenshot, it does look like the Community ID algorithm is off (it seems like it shouldn’t show 3/3 for the genus and all green).

I actually just did this with a different observation, and it behaved the same way (showing 3/3 for the lower level ID and all green). However, when I looked at the results of the algorithm (by clicking “About”) it did calculate the algorithm correctly. 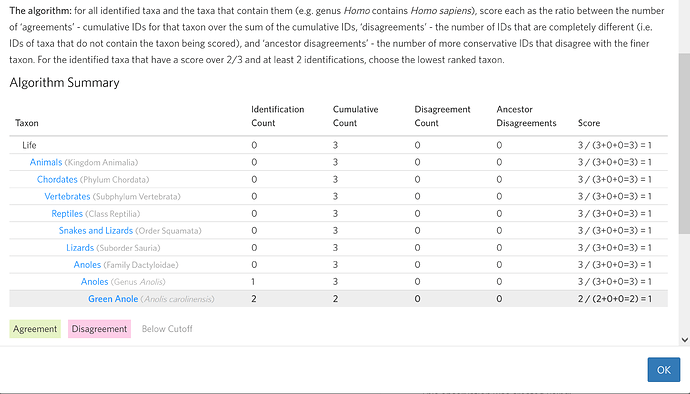 So maybe this is just a display issue for the Comm ID bar and not anything affecting the real ID?

The observation is here for anyone looking into it.

On a side note, the colors in that community ID bar are so similar to some color blind people (like me), I can never even tell if it’s correct or not!

In the color bar, red means disagreement and green means not disagreement. So the info in that box means: the community ID is currently at genus Trachelas and there are no disagreeing IDs. That is completely consistent with the sequence of IDs: Trachelas, Trachelas, non-disagreeing Trachelidae.

For demonstration purposes, I added (and then deleted) another genus ID. Now the community ID is again at genus, and the red bar indicates arachnojoe’s newer disagreeing ID. 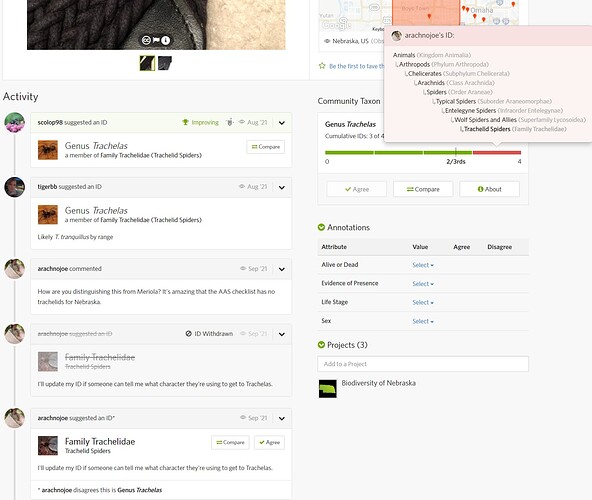 It has previously been suggested that non-matching but non-disagreeing IDs be in another color (e.g. yellow or gray), but no one has officially requested that.

showing 3/3 for the lower level ID and all green

I agree, the “Cumulative IDs: 3 of 3” does seem misleading. I updated the title of the bug report to represent the issue more clearly (I think!).

Seems to be a frequent confusion.
https://forum.inaturalist.org/t/unexpected-community-taxon/14327

colors in that community ID bar are so similar to some color blind people (like me), I can never even tell if it’s correct or not

iNat still needs to offer an accessibility setting for that issue?

Yeah, it could be a grey bar or something. Might help? Honestly, I think it will always be a little tricky to understand for most people until they work through an example themselves for a specific observation they care about (because it is a bit tough!). But I could see a different color bar helping, especially if it had a rollover text, etc.

I have learnt to either spell out in a comment ‘not disagreeing with your species’
Or skip it, if I have to explain every time.