On the identification screen, create a shortcut key to play the first sound file for the observation

Description of need:
Keyboard shortcuts are used for many routine identification tasks, and make it much easier to perform ID’s (especially when doing many). In every ID session, I use zoom, next/previous photo, prev/next observation, agree, and identify keyboard shortcuts. In the past, I have found myself passing over sound-only observations due to there being no way to play the sound without leaving the keyboard. If there was a shortcut key, I would have been more likely to at least listen. With spring frog season coming up, I suspect there will be many sound-only observations, in addition to the year-round bird calls.

Feature request details:
Use a keyboard shortcut to play the first sound media associated with the observation. Perhaps ALT/CMD + P.

Also consider making ALT/CMD + ← & ALT/CMD + → Prev/Next Media instead of just Prev/Next Photo. (This part probably requires more thought than I have given it)

Love this idea - just ran into the same issue with sound observations and came searching to see if anyone had made a feature request! My only addition is that the “z” shortcut for zooming to image could be use to play the first sound in sound only observations. Doesn’t require a new shortcut, and I’m often hovering over the z during ID work anyways.

“Z” would be very natural for me as well.

This has been added. Press space to play the observation’s first sound. 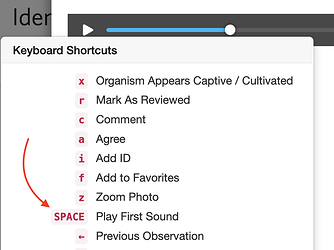 In Identify mode, the space bar to play first sound file does not seem to function for Sound Cloud audio. Not sure if it is supposed to. On PC in Chrome. Trying to link the observation in Identify just created a string for the ID parameters. Here is an obs with sound cloud that we encountered (but in identify mode): https://www.inaturalist.org/observations/18775288

This is our first encounter ever with Sound Cloud audio. Thank you.

Many moons ago iNat didn’t support sound uploads - it could only be done via a link to SoundCloud. But problems started to happen with our connection to SoundCloud so we started to support direct upload of sounds to iNat and imported as many SoundCloud sounds as we could, but not all were imported (see this discussion). There are a tiny number of SoundCloud observations that remain on iNat and I imgaine nearly all of them are pretty old so are unlikely to be encountered by the vast majority of Identify users. I don’t think it’s worth making functionality to support playing those with space bar in Identify.