I believe this only applies to a small group of people but I would like to put it out there. When viewing observations in iNaturalist with the map, features on the map do not properly scale when using an ultra-wide monitor (This may also affect widescreens but I am not sure), causing them to hover in the center of the screen. It makes the map a bit awkward to use with features at the center blocking users from having a clear view of the map.

If possible, having the screen properly scale with resolution, including widescreen and ultra-wide, would be appreciated. Bringing the info boxes to the periphery of the screen so that people’s view of the map remains unobstructed and easier to get a full image of the area you are looking at. Also scaling of the map itself vertically as with widescreens the map appears as a strip instead of filling out the screen.

If this belongs in a different topic or doesn’t apply here I apologize.

Don’t forget to vote for your own request

are you talking only about changes in the map view? if so, i think there have been a lot of suggestions for Explore page updates, including more dynamic scaling (i would assume mostly for mobile, but which could apply to large or wide monitors, too). see: https://forum.inaturalist.org/t/ideas-for-a-revamped-explore-observations-search-page/8439. this kind of limited request might go best within that larger thread.

(it may be worth noting that below the buttons to zoom in/out and to find your current location, there’s a button to view the map in full screen, which might be the actual best solution to view the map on a large or wide screen.)

if you’re talking about making the whole website more dynamic for large or wide monitors, then you probably should make a case for such changes on other pages. small screens are less niche than large / wide screens, and past requests for small-screen-friendly designs haven’t gone very far: https://forum.inaturalist.org/t/mobile-friendly-website-responsive/1224.

For what it’s worth, I think it’s the horizontal resolution of the screen that’s the issue, not the aspect ratio of your screen—meaning, a square screen with the same horizontal resolution in pixels would have just as much dead space at right and left, along with of course a lot more space above and below the map, while the map interface would look just fine on an ultra-wide monitor with low resolution.

You can address this to some extent by zooming in with a browser, although of course that makes all the other UI elements bigger, too. So you don’t really get that much of an increase in usable map space, because a lot of it gets eaten up by the now-massive list of observations on the right. Basically, the UI is optimized for small, low-resolution screens. If your screen is large or high-resolution, no matter what its aspect ratio is, the UI is not going to fit well. 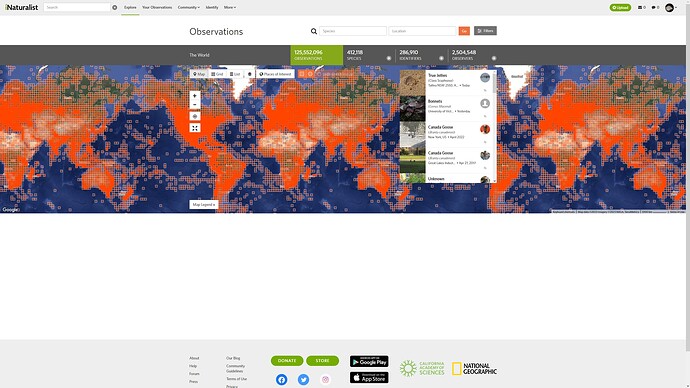 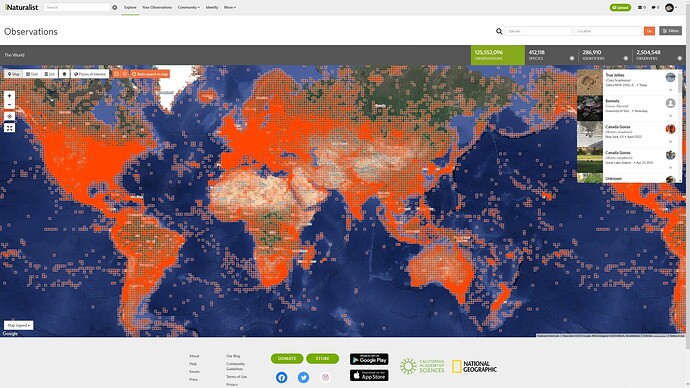 Looks a bit odd though

It becomes even worst if you switch the interface language to broader one, like Russian.

Only highlighted part of the map can interact with the user (dragging, opening the marker or close the obs. card.

No, I’ve made feature requests on behalf of others that I myself didn’t support. But you could discuss it further at #forum-feedback or at the Discourse forum: https://meta.discourse.org/tag/topic-voting

Evidence, not proof. :-) Exceptions exist but are presumably rare.