A commercially successful version of such a drink. The concentration of tomato juice is known to be above 90%, especially towards the end of venue closure or during happy hour.

In places like France and Italy and such, it’s going to be extremely difficult for farmers who have had grapes or olives or whatnot on their land for generations to change to something else that might grow better in the new conditions because of that cultural relevance.

But. They are changing. Farmers can see climate change and drought and failing crops and changing markets.

And on my no thanks ick list is flour from powdered crickets.
Also HUGE waste from the actual fruit of coffee berries, which is also edible.

We have a quietly growing emphasis on veldkos. The wild food which was traditionally eaten by hunter gatherers. And is still eaten by Cape chacma baboons - bulbs, flowers, shellfish.

But they know about it, there’re even maps of future distribution of grounds good enough for growing grapes in Europe, so farmers will shift gradually when it will happen just because they will be failing at spots where they’re at now. Talking about possible wines, there’re so many home-made variations from every fruit or berry possible, maybe there’ll be more prune wine on market or similar thing that doesn’t need much attention and constant watering as tomatoes do.

exporting groundwater makes no sense to me, and exporting desalinated water makes no sense either if the desalinated water is coming from a supply that is intended primarily for human water needs. i’m not sure how Australia’s tomato industry works, but it looks like there’s at least one farm in Australia that has built their own dedicated solar farm and desal plant to supply the power and water needs of their farm. to me, that’s less objectionable, with the remaining issues being the usual issues of land use, habitat destruction, etc.

We (Cape Town, Western Cape, South Africa) export virtual water as fruit or wine. A lot of difficult decisions. Bur rather food than greens at the golf course, if I am choosing.

And on my no thanks ick list is flour from powdered crickets.

I actually got given a bag of chips made from cricket flour, and they were great. I’d absolutely eat them regularly, but they’re horrendously expensive. Sigh.

your biggest challenge will be to get people to accept replacement crops/products for things that are widely accepted and culturally relevant.

The good (bad) news is that at the current rate, people aren’t going to have an option, it’s going to be “eat what’s available or don’t eat” and “change what crops you grow, or nothing you grow survives”.

Ideally, we make those changes voluntarily instead of being forced into them by climate change and environmental degradation, but we’re going to end up there in the end one way or the other.

Given the amount of dependence on fertilizers due to soil damage, and the fertilizer shortages due to the Russia situation, we’re already heading into a global food shortage soon. Even in the best-case scenario, supplies are going to be tight for a couple of years.

here I was hoping that I’d get the chance to sample milk from Panthera tigris.

Sadly, this is the case even in places where you might think people would know and use them. Dominicans think of goldenberry as a weed, not as something to eat. And it isn’t that they are unused to foraging, because there is a domestic industry in sea-almonds, which are almost all wildcrafted. It’s just that there are only certain wild foods that are part of their cultural repertoire.

I’m vegetarian so prefer my chips made from lentils.
Mopani worms (caterpillars) are a traditional food
I’m sorry - I can’t!

Or Soylent Green anyone?

Heh, “Tiger’s Milk” is the name of a popular chain of bar/restaurants here.

I would be curious enough to give mopane worms a try, as well as the other snacks made from insects.

Swarms of locusts - should be a good food source?

I’ve wondered about this question with respect to non-vegetarianism: Is it more ethical to kill one large something (like a pig) that feeds many people or many small somethings (like crickets) that feed only one person. Not sure the ethical question is easy to answer, but some maths exist for feeding many from one.

Which is the year after I took this picture in Walmart: 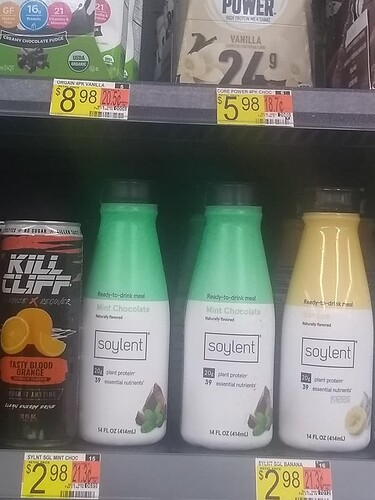 With four fruiting mulberry trees in my garden , I make delicious mulberry wine.

Crickets would be more like harvesting a crop. In the sense of a steady supply of food.

One pig could feed a farmer’s family. But city dwellers only eat the chosen bits. (I think USA exports unwanted chicken wings to South Africa … food miles!!) I hear financials for pork bellies. What happens to the rest of the pig?

Haha, LOL, i also wondered what exactly Tiger Milk was :-)