Your top 10 most identfied 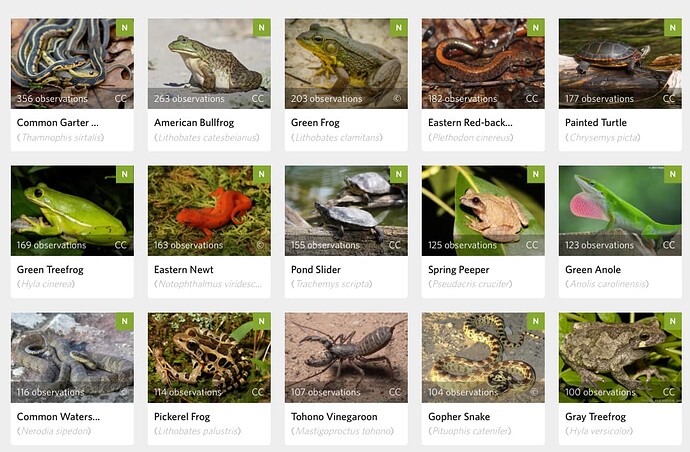 My list is filled with common herps in the U.S. Odd that the Tohono vinegaroon made it to a list full of reptiles and amphibians. My first non-reptilian and non-amphibian ID is Japanese knotweed, at number 34.

Enjoyed looking at this link - Thank you.

These all look like easy pickings. Spent a lot of time on unknowns, favourites don’t really show up - many of those don’t even get to genus. Easy pickings are a break from the Unknown and State of matter life. Going to consider looking at the top 11 to 20 to know how to switch things up with when a break is needed.

From working on Unknowns, what does not show up are identifications that are at different taxonomic levels ie: Kingdom Fungi 430, Phylum Tracheophyta 292, Class Magnoliopsida 1,041, Order Lepidoptera 127 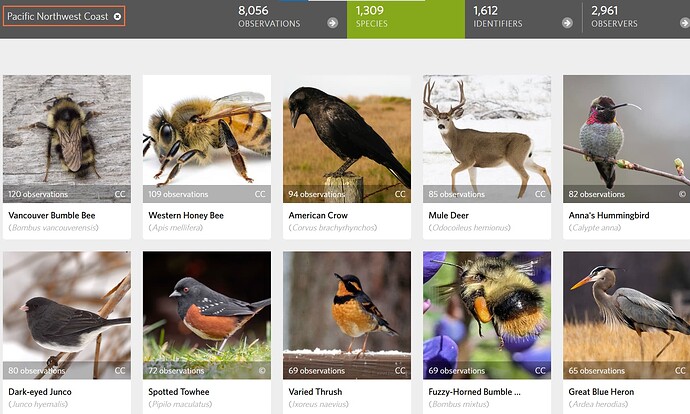 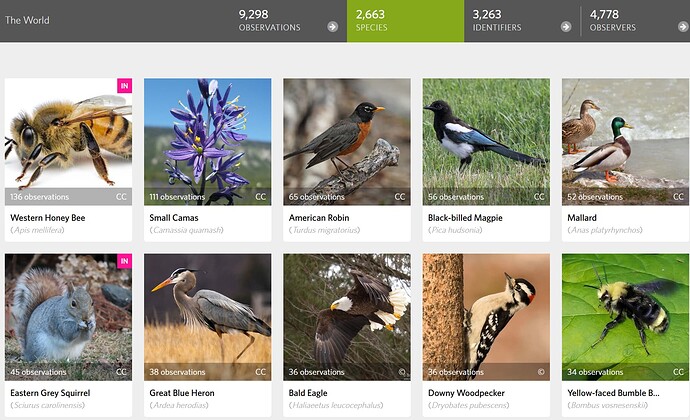 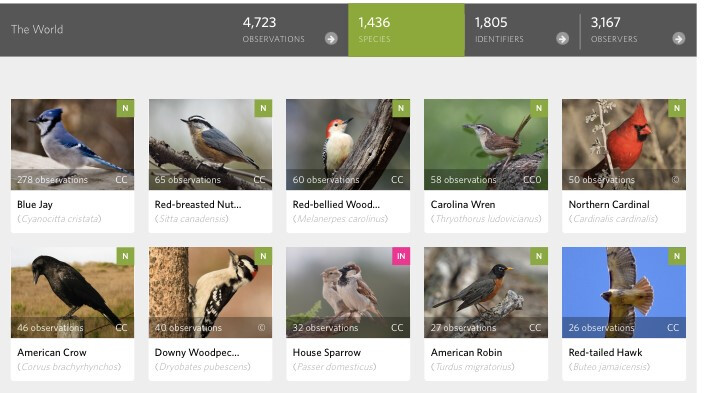 They are all birds. The first three are species we target for ID sometimes. The rest of the top 10 we do not specifically filter for (except Downy Woodpecker falls under Dryobates Woodpeckers, which we are currently filtering for to improve our ability to distinguish it from Hairy Woodpecker).

The first non-bird is #17: Common True Katydid (because we ID unknowns with audio and they are common). The next non-bird is #31: Eastern Chipmunk (same reason). The next is a plant, Common Jewelweed #37, which we have filtered for in the past because we know it and appreciate it.

We often filter for Midwest USA but not always. And we do ID worldwide unknowns using Dicot, Fungi, etc. 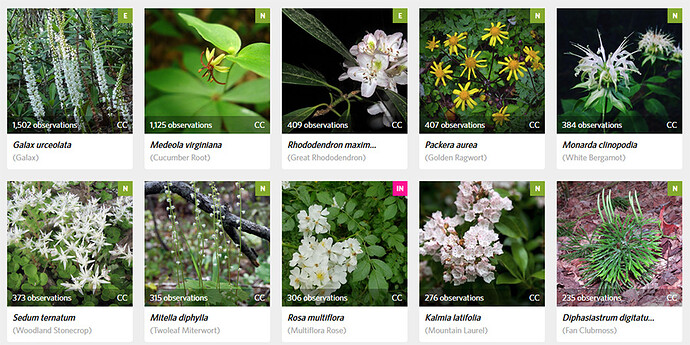 Parasitoid wasps and… that’s it!

It’s interesting to see this list because it highlights how many wasps only get ID’d to family/subfamily level.

It’s position 39 before my ID’s are not wasps (except Apis mellifera and Pterygophorus cinctus, which are still hymenoptera).

I apparently ID a lot of pond sliders.

I tried to save page as and it tells me file type isn’t allowed when I post a picture. But it looks like I’m only getting species level IDs rather than broader IDs which I think I have more of

I thought it was kinda funny how closely my personal top 10 track (even in order!) the top robber fly taxa: the 1-10 of my list are corresponding ranked 1, 6, 2, 3, 4, 11, 5, 13, 12, 10 in the overall top observed / identified asilid taxa on iNat. Part of this stems from which taxa have better-known identification and are posted in plentitude (i.e., North American stuff), and partly it’s because my identifying preferences have likely helped shape the global patterns.

I wish I could force it to list my most-issued IDs, since I know I’ve left some subfamily IDs way more than any single species, but since there are CV-taxa nested in those they won’t show up here. 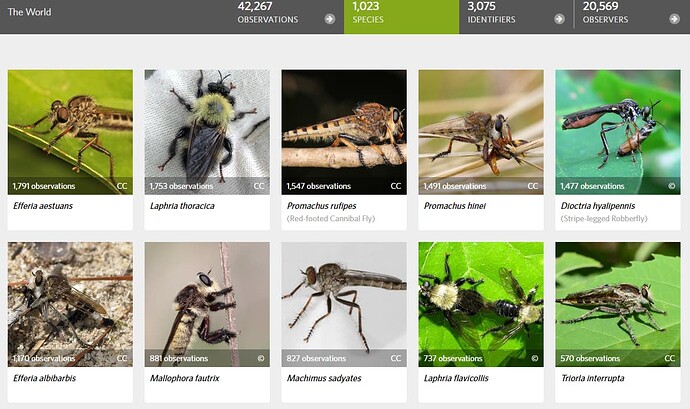 Are you a generalist, where you observe and identify whatever is in your geographic area of interest? If so, this could explain the similarity.

image750×337 94.2 KB
Mine are simply some of the most common Salticids in the USA, with a special emphasis on Platycryptus undatus. It’s my favorite species. Extremely consistent to identify once you learn how. (It’s difficult at first)
At one point I identified every possible non-research-grade observation within genus Platycryptus. Not meaning to brag

I would call that pretty determinded! Cool stuff.

I love to see what eberyones favourite IDs are, very interesting! Thanks for participating.

My goodness, so many specialists. My top ten come out in two main themes: dandelion-y looking flowers, and trees of tropical coasts: 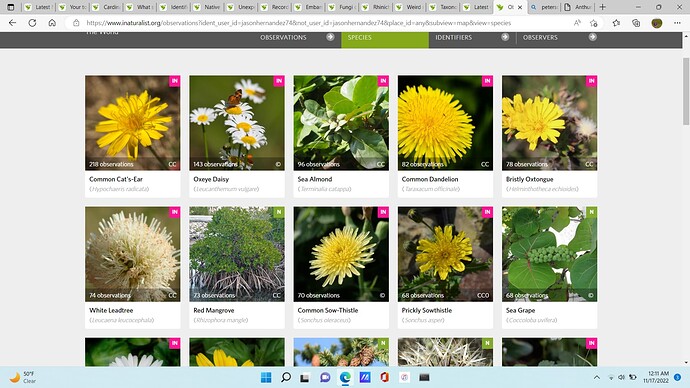 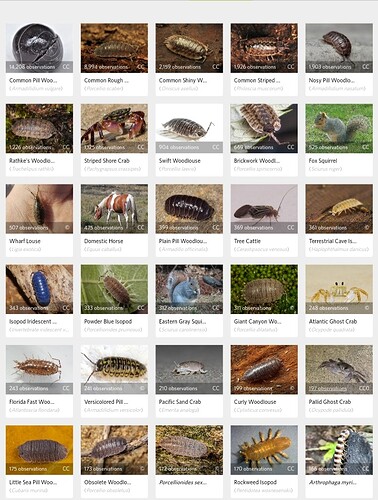 Mostly, i give a high-level id to unknowns. I do it off and on (mostly off). It’s a bit embarrassing to id mainly cultivated plants and note such as not wild . Marginally useful, maybe, but still nothing to flaunt. I have set a new goal of doing at least as many IDs as I have received. Perhaps, in the process, I will learn enough to do more useful IDing.

Specialist - both in species and area.

I wouldn’t think of that as embarrassing - it still helps a lot with quality control. Out of curiosity, I checked my top 10 “captive” IDs. Not a whole lot of surprises there, either - all plants that are commonly grown in gardens around my area, plus Venus flytraps worldwide. At least I can claim on that one that they are native to NC and I’ve made several trips to photograph them growing wild! The fact that galax pops in again is due to me at someone point taking a closer look at out-of-range observations for that species. 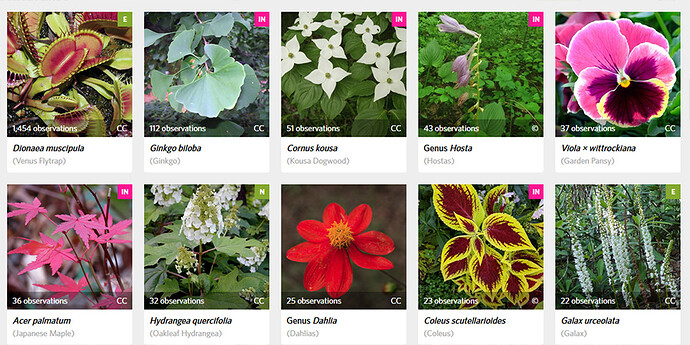 No surprizes here: my speciality is Proteaceae, and I am chair of the Western Leopard Toad Monitoring Committee. So quite what I expected. 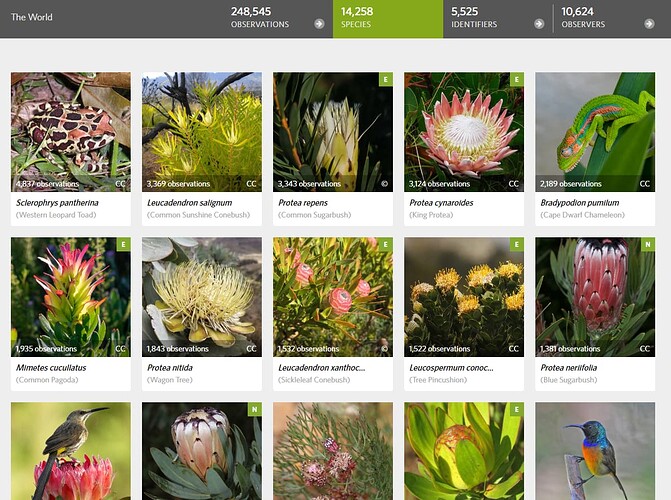 image1189×885 161 KB
What I do find curious though is this tendency to exclude one’s own observations. After all I do ID many of my own observations, and for some Proteaceae I am one of only a handful of people who can.
Interestingly enough it does not change most of the species or the sequence, but it does nearly double the number of identifications (for the same number of observers) that I have made if I include my own observations: 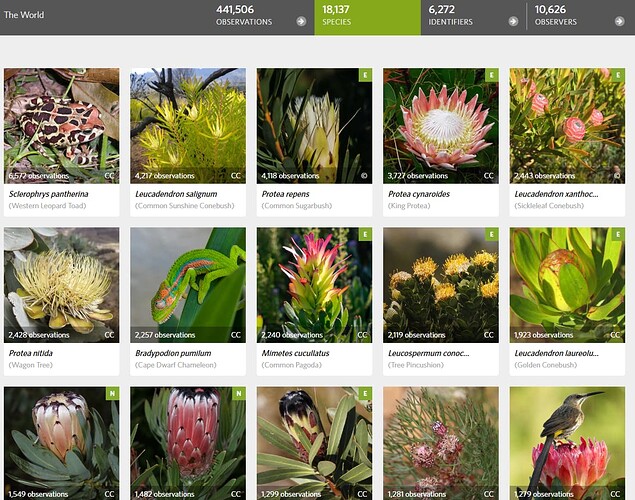 I wonder if it would be a rule rather than an exception: that we observe ourselves what we identify for others most often?

Interesting notion. None of our top 10 were the same for Identify and Observe. We observe bees and butterflies most but ID mostly birds. We do observe a lot of birds, too, but they are less exotic to us and so we tend not to upload what is so familiar. The first overlap between the lists was Red-tailed Hawk (10th most identified and 11th most observed) 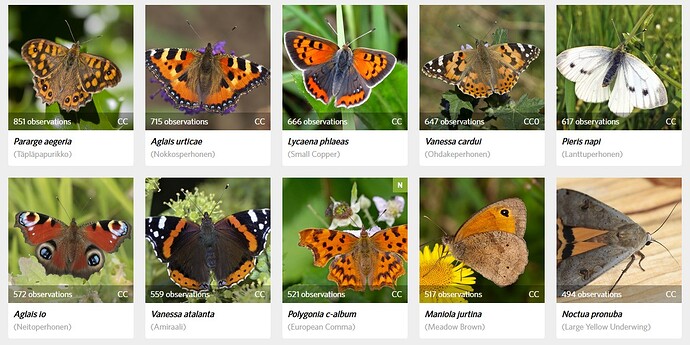 Clipboard011168×585 201 KB
No surprises here! The top species on the list are very common species that pretty much everyone is bound to see and even notice. The last one is the only exception and that is something every mother will see.

What is almost embarrassing is that the total generated list ended at species with 5 identifications and there still had not been any non-Lepidoptera species listed.