An excellent addition! A few pointers from me:

Moulting occurs in more than just reptiles and arthropods, and it would be good if it could be expanded to include those groups too (even if finding a moult from them is less likely than from reptiles and arthropods). Principally, everything in Ecdysozoa moults as far as I’m aware - on iNat this corresponds to the phyla Kinorhyncha, Nematoda, Nematomorpha, Loricifera, Onychophora, Priapulida, and Tardigrada - and several amphibians moult as well so it could be useful to expand it to them as well.

Would we be able to have somewhere to put a concise list of future additions to this annotation? I feel like many of the suggestions will get lost here and people will start repeating themselves.

I agree with not adding in an ‘other’ category, at least for now, but is it possible to search for images/sightings that have not been annotated? I get that this probably isn’t all that helpful because lots of people do not annotate their sightings at all, but it could be useful to at least remove photos that are definitely not what you’re looking for if you’re looking for something that isn’t an option yet.

several amphibians moult as well so it could be useful to expand it to them as well.

Do they leave their molts behind, though? We used to have newts in an aquarium, and they always ate their molts as soon as they finished molting. As was said earlier, these annotations are for when the organism itself is not available for you to observe.

On most occasions they do, but not always. Many insects are similar - if given the chance they will eat it, but sometimes they don’t. I don’t think it would be a very common occurence, but it’s still worth having it just in case I reckon. It should be easy enough to expand it to other taxa.

Principally, everything in Ecdysozoa moults as far as I’m aware - on iNat this corresponds to the phyla Kinorhyncha, Nematoda, Nematomorpha, Loricifera, Onychophora, Priapulida, and Tardigrada

I knew about tardigrades moulting. Just looked up Ecdysozoa. It would make sense to apply the annotation of moult to everything in superphylum Ecdysozoa since that is a characteristic shared by this group.

You can’t really batch edit them, but you can use Identify to annotate your observations fairly quickly (although there are some performance issues which I want to look into later this week).

Information on the linked page shows annotations appearing in the filter window but it doesn’t for me. I assume it has been changed since there are a “photo licensing” dropdown and “reviewed” flag selection radio buttons in its place. It would be helpful to have a list of the term_id and term_value_id values.

Information on the linked page shows annotations appearing in the filter window but it doesn’t for me.

It’s appearing for me at https://www.inaturalist.org/observations/identify 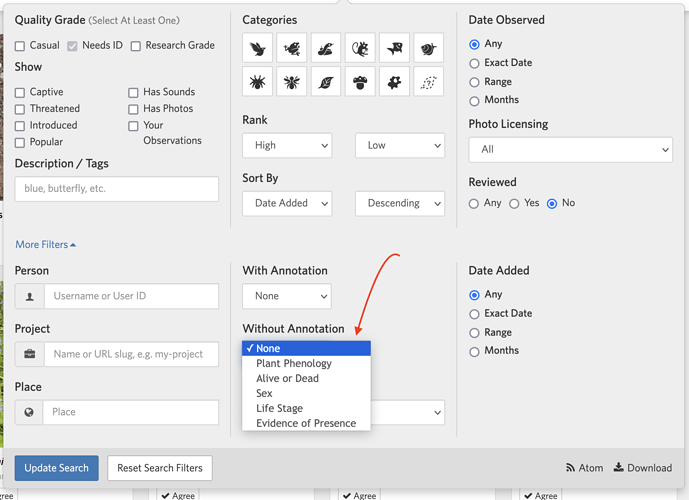 Please provide a screenshot and URL so we can try and replicate.

It would be helpful to have a list of the term_id and term_value_id values.

Added to this tutorial.

I use the “Evidence of feeding” a lot from the Animal Sign and Song field. I use that for leaf mines, and all other distinctive signs of invertebrate feeding when I’ve not looked hard to find the invertebrate itself, or it’s gone.

Looking now, I see that it’s the third most used category after tracks and scat in Animal Sign and Song. I’d certainly been keen to see something like it added to Evidence of Presence. Perhaps something simpler like “Feeding sign” would be more widely understood.

I suspect it’s better to keep things broad like this rather than attempt to break Evidence of Presence into lots of categories of invertebrate feeding like mines, galls, bores, folivory, etc. I made an attempt at these categories with the type of herbivory observation field, which we’ve been using in New Zealand to document our plant-invertebrate interactions.

I agree with not adding in an ‘other’ category, at least for now, but is it possible to search for images/sightings that have not been annotated?

But can this be done from the “Compare” page like the other ones?

This is fantastic news! Thank you very much for this feature. It will be a tremendous help.
I like the initial list of values, thanks.

However I’m not sure how to apply the initial values to some common scenarios.

I know it was said, but nests in insects/mammals/birds/reptiles are a must have!

Another note… Something like a cuttlebone (or other non-vertebrate endoskeleton) I feel fits under “bone” (either that or it should have its own category). Sorry, I will probably keep adding short notes here as I go through and annotate my sightings!

Web should be added for spiders and other web-spinning arthropods.

Mollusks need “shell” as now they have “organism/scat/track” only.
And maybe different marine worms and worm-like groups need annotation for tubes they create.

I like this idea - in theory would encompass owl pellets, wrapped up spider prey, leaf damage from herbivory, etc.

I’m going through my obs to add annotations and came across a couple I’m not sure what to do with
Would this count as a track? https://www.inaturalist.org/observations/23093150
I also have obs of destroyed turtle nests with the shells left behind after the contents have been eaten. I currently have them marked “Dead” and “Egg”. Does that sound appropriate?

Yes! “Feeding sign” would be a great, general addition.

But it could be that you photograph tracks of something you saw moments before, so it’s both alive and tracks.

Yes, you could have seen that it was alive and mark it as such, but if you didn’t get a photo of the organism you don’t have the organism as evidence.

No, the point is there is no organism on photo, so you can’t annotate it as organism.