Currently, it seems that synonyms and scientific names have “equal weight” in terms of display order when a user enters species names into a search box. This can result in a situation where a species with a synonym which includes the scientific name of another species is displayed before it if it has more observations.

You can see this behavior here: 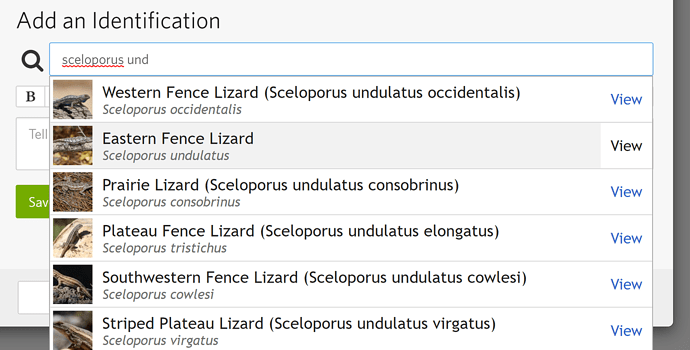 This is undesirable because it:
a) Makes it a little more difficult to add correct identifications for S. undulatus and
b) Leads to confusion, whereby some users misidentify S. undulatus as S. occidentalis because S. occidentalis is suggested first. This despite the fact that the ranges of these two species do not overlap.

A little bit of background: As far as I can tell from Reptile Database (source of iNat’s reptile taxonomy framework), S. occidentalis has had priority over S. undulatus occidentalis since at least 1985, and that’s in the primary herp field guide for the Western US, which is where most observers (both professional and laypeople) are going to be getting their names from. The comparatively ancient synonym has been retained here, presumably to aid users who enter the old name.

One potential solution could be to remove the synonym from S. occidentalis. In this situation, that might be appropriate (since the synonym is so old), but this could also lead to confusion for users who prefer the old name. There are also likely other species with newer synonyms where this same situation arises and retaining the synonyms is quite useful.

A better solution, which I am proposing, would be to change the display order of taxa to prioritize displaying taxa for which a given text string matches their primary scientific name over those species which include the same string in their synonyms.

This is an issue that has come up on the forum before, but as far as I can tell there hasn’t been a feature request to change this. There have been two related bug reports (1, 2) which included ideas from @carnifex and @bouteloua about how reprioritizing ordering may be beneficial. In another general post, @chrisangell proposed some ordering criteria as well. (all tagged here in case they’d like to chime in!)

On a side note, this behavior also occurs even when the synonyms are not displayed (see example below from search bar on main page) which is also confusing.

I’ve run into similar frequent issues with common names in languages I don’t speak. Here was my suggestion on a different topic:

Suggestions for synonyms override options with the name typed

I’m not sure what exactly the feature request would be, or how the current ranking is done, but ranking priorities like this would make sense to me:

plus some sort of weighting based on number of observations, but not at the expense of any queries exactly matching the accepted scientific name not appearing in the results.

strongly agree that this needs prompt fixing. in addition to synonymized names, common names in other languages can create a similar problem. for example, a search for the soft coral Cervera places it at #11 in the results, behind a bunch of non-English common names.

I would suggest the following priority.

regarding #3, English is the de facto language of today’s science publishing, so it should take priority over non-English names.

Disconcerted that ‘Life’ is a common name for something in particular.

Regarding “3”: Presumably the best solution would be more consistent implementation of current stated policy over a broader range of contexts:

Why don’t I see my expected common name?

iNaturalist has a number of settings related to common names, and they are applied in a particular way. This is how iNat determines the common name displayed to you:

First, iNat looks for the default (top-ranked) name that is set to be used in your preferred name place. If you have no place priority set, or there is no name listed for that place, then iNat will use the top-ranked name in your Language/Locale setting. Only curators have access to the page that shows the name rankings and place associations, however anyone can use the API to view this information, e.g. https://www.inaturalist.org/taxon_names.json?taxon_id=55819. If there is no name listed for your Language, then iNat will use the top-ranked Global Name.

Since language-specific behavior already works very well in a variety of contexts, presumably addressing the few remaining gaps would be feasible.

I’m not sure that the “language of today’s science publishing” has any relevance in this context. The purpose of common names in iNaturalist is not science publishing, but making it easy for people to assign organisms to the right taxon. English is only the right choice if the user’s primary language is English. And, as a botanist—I know it differs in other contexts—scientific names are the standard in scientific publishing. English names are sometimes used, but if so the expectation is that the usage of that name will be established by reference to the scientific name.