What a great way to use iNat data! It made me curious about some of our invasives. E.g. our local Native Plant Society group has been working on controlling a patch of mile-a-minute weed (Persicaria perfoliata) since we first noticed it in 2017. It is listed as a class A noxious weed in North Carolina. I was curious what that plant is doing and it looks like it is set to make its move further south and west. “Our” patch is the little green circle. 2021 data is incomplete with observations coming in pretty much daily at this time of year due to the showy berries.

Thanks for sharing, cool to see the series of maps laid out like that.

The Joro spider, native to Asia, became established in the Hoschton, GA area around 2014

The timeline is interesting to me and time lag from first record to first scientific paper to first iNat observation. Oct 2014 first record → Feb 2015 paper → Oct 2016 iNat obs. Given how many more people are making iNat observations now compared to 2014, I wonder what the expected time lag would be for a newly introduced/discovered invasive species now if it were as conspicuous as the Joro spider.

Yes, I thought about how more people are using iNat now vs previous years, and how that affects observation count, but didn’t realize the difference was that great. Good point.

One way to get a rough sense of the extent of the change that is due to the increasing number of observers would be to do a similar time series for all similar observations—for example, how many observations of arachnids were there each year? You might compare to all insects (I know; not the same Class, but it’s just a proxy for how many people are out looking and would have been likely to record this observation), too. Somewhere in the various filters for taxon, location, and so forth is likely to be a sweet spot that gives a representation of changing activity of naturalists in the areas where these spiders are being observed.

For example, what if the early iNaturalists included a few dozen folks in the area between Anderson and Greenville, SC? Looking at various displays of observations, we could figure out if in 2015–2019 they even visited the locations where someone found Jory spiders in 2021 and, if they did visit those areas, whether they were making the kind of observations that would indicate that they probably would have recorded this species if they had seen it.

Perhaps the best comparison, if it gave enough data points, would be observations of orb weavers. But we could also see things like, even though people didn’t observe many orb weavers, they were in the area observing butterflies and cicadas and other species that make you think that they would have recorded this striking spider if they had seen it. Or we could see that although starting in 2014 the area had the highest density of iNaturalist observations in the state, until 2021 nobody was recording anything but conifers in that area. (And, yes, I am making all of this up just to illustrate the point.)

Without doing more than a few series, we could get a pretty good sense of whether that patch in South Carolina is due to the first spiders moving in or the first iNaturalists showing up to see them.

@conboy would love that!

I did one for spotted lantern fly 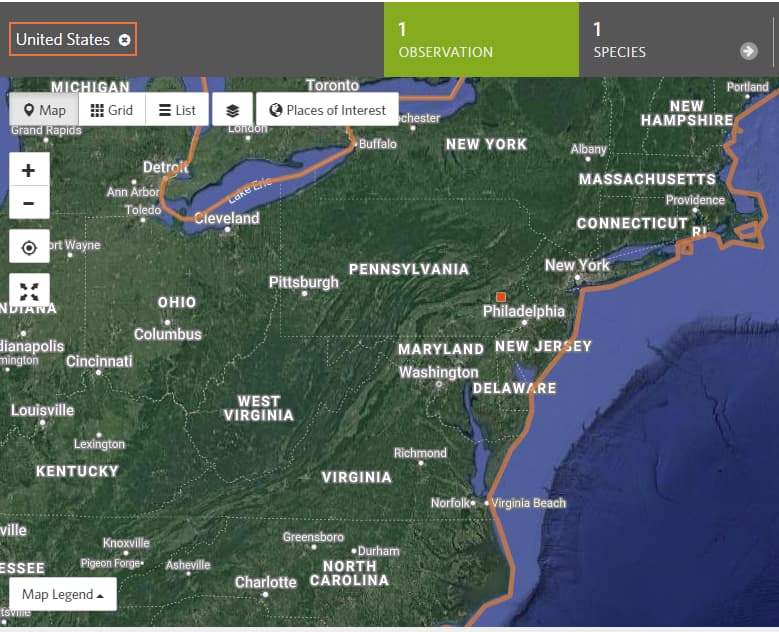 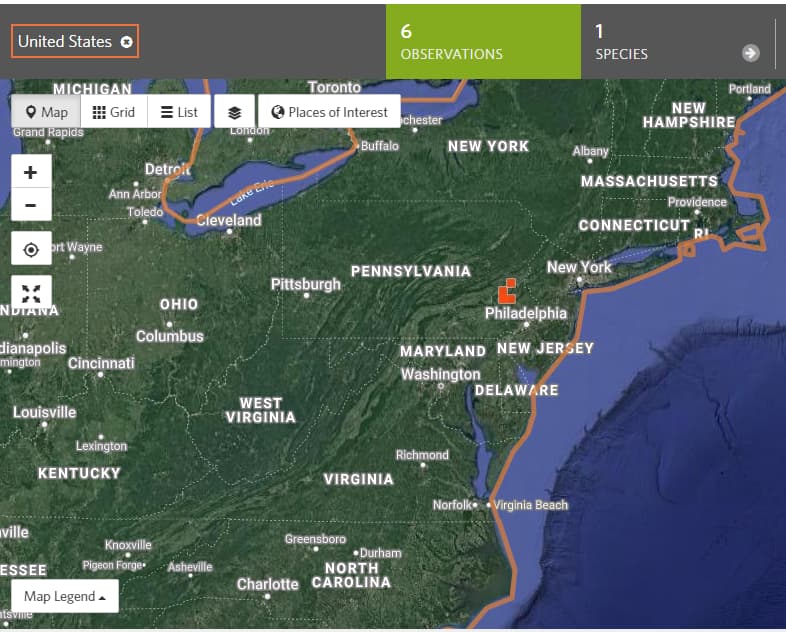 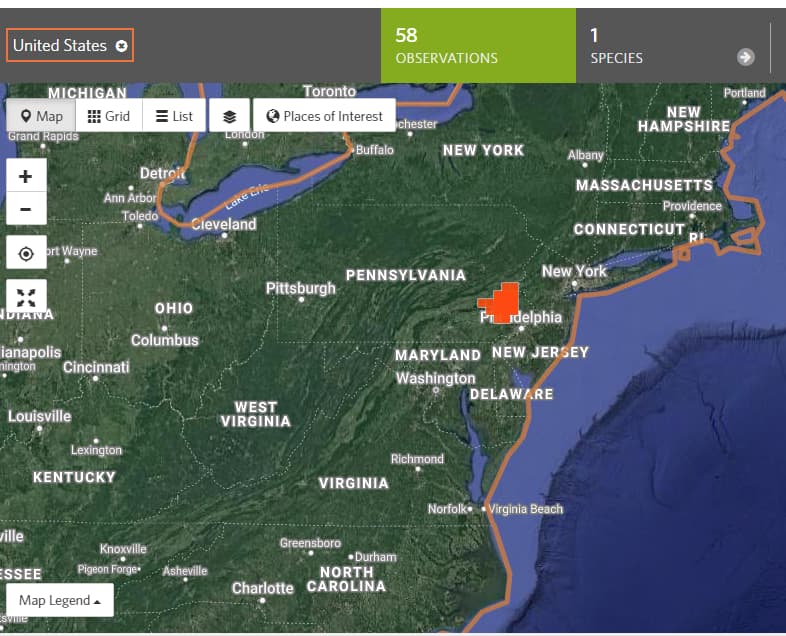 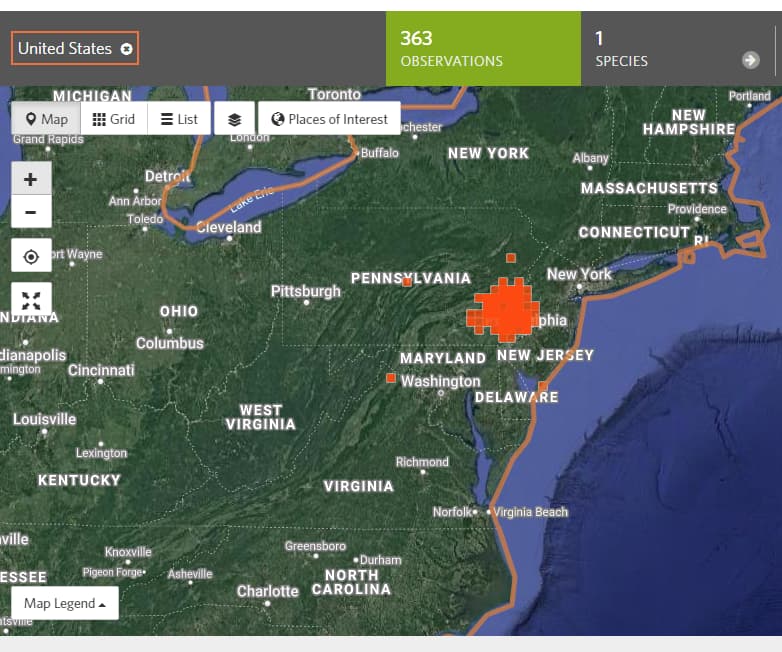 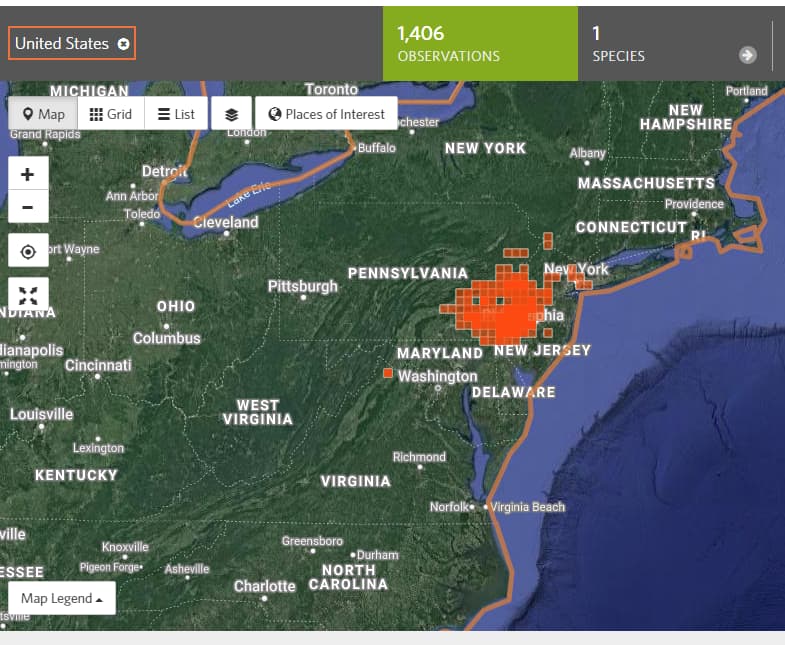 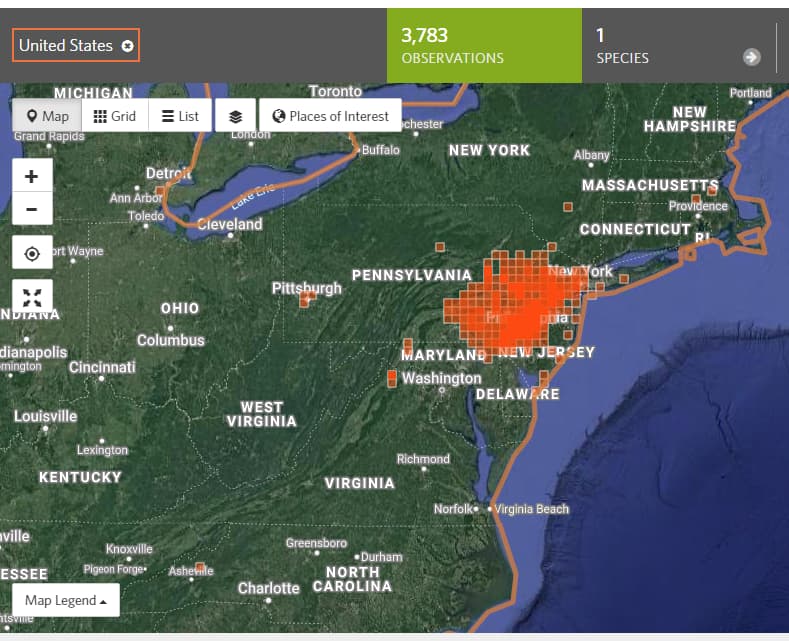 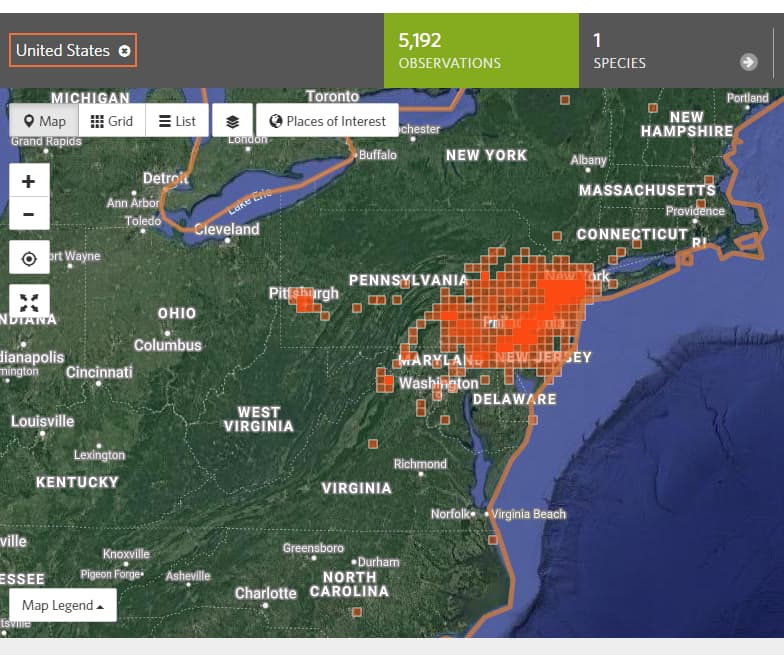 I also made a graph of the counts per year. Note the log scale. 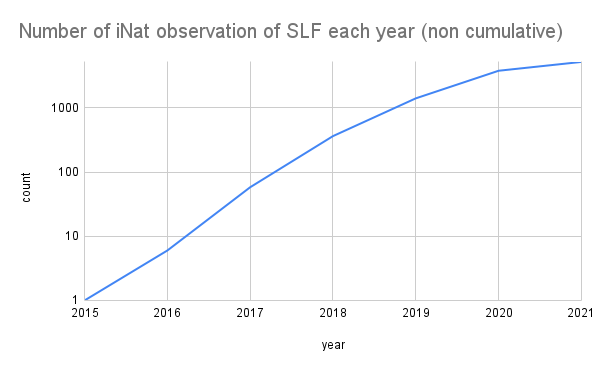 These spiders are big and scary-looking and make large webs, so they are easily noticed

Ever see the movie, “Arachnophobia”?

It’ll be interesting to see if birds try to prey on these spiders. These spiders have sticky 3-D webs, The webs have been documented to trap hummingbirds in at least two instances; fortunately, the birds were rescued. It’s going to take a bigger bird to want to mess with that web.

Super cool, thanks for sharing!

I remember the very first SLF sightings in NJ which I saw on iNat. Now, two years later, we get dozens reported each day.
And this year I’ve seen a few new species of plant in NJ that are invasive in other parts of the US. I advised local authorities, but I expect them to establish themselves within a few years regardless. Sigh.

I live just north of Atlanta. I first observed one of these spiders a few months ago in the Kennesaw Mountain Battlefield, at first convinced it was a native Trichonephila clavipes, then surprised when frequent identifier of mine @pucak confirmed it was a “Joro spider.” Now it seems I’m seeing and hearing about them all the time!

Spinning off a couple of comments, including one of mine here, some observations could be used to document the travels of iNaturalists. I’m thinking of giant reed (Arundo donax), particularly because of a conversation I had some time ago about the observations recorded in the Texas Invasives database.

“Why is the Arundo only along the highways?” I was asked.

I answered, “It isn’t. The people observing it are.”

And for populations that are fairly constant—the giant reed is, of course, popping up in new sites, but its pattern in much of its current range is pretty much as it was 10 or 20 years ago—each new observation would tell us more about the expanding reach of iNat than about any expansion of the range of that plant.

Of course, mapping all observations would do the same, but that map would quickly become a red mass, whereas observations of a single species would take more time to blot out the background, perhaps giving us a visual representation of growth over a greater period of time.

It would have no precise statistical value; still, it would produce a nice animation.

The attached screenshots show the Joro spider observations in this area over the last 6 years, filtered year-by-year

just for grins, i translated the Joro observation time series maps into a short video: https://youtu.be/ispwkQKQ23M. this is similar to some of the visualizations discussed in: https://forum.inaturalist.org/t/map-animation-of-observations-over-time/1217.

I did one for spotted lantern fly

there was also an earlier visualization of the spread of SLF using the iNaturalist “experimental compare tool”: https://forum.inaturalist.org/t/map-showing-spread-of-spotted-lanternfly-since-2016/6377. i thought visualizing time series data was a clever application of that tool.

Now when you said that, it’d be cool to have a gif of mapping all iNat observations over time.

I think loarie has made some of those! Search in older blog posts.

I will! But with current growth they’re getting outdated pretty fast.

I checked all loarie’s posts on forum and none was about such thing, maybe checking the whole iNat blog could be useful, but there’re so many, if it’s so hard to find out new one is needed probably.

that’s what I meant, the blog itself. I don’t think there is any good way to search within them. maybe a future feature request?