1.77 × as much above-ground biomass in Great Britain's temperate broadleaf forests than previously thought

A recently published study has found that there is 1.77 × as much above-ground biomass in Great Britain’s temperate broadleaf forests than was previously thought, and consequently estimates of the amount and importance of carbon storage in such forests has likely been underestimated locally and abroad!

Using three-dimensional laser measurements across the full range of tree size and shape in a typical UK temperate forest, we show that its AGB is 409.9 t ha−1, 1.77 times more than current allometric model estimates. This discrepancy arises partly from the bias towards small trees in allometric model calibration: 50% of AGB in this forest was in less than 7% of the largest trees (stem diameter > 53.1 cm), all larger than the trees used to calibrate the widely used allometric model.

We present new empirical evidence that the fundamental assumption of tree size-to-mass scale-invariance is not well-justified for this kind of forest. This leads to substantial biases in current biomass estimates of broadleaf forests, not just in the UK, but elsewhere where the same or similar allometric models are applied, due to overdependence on non-representative calibration data, and the departure of observed tree size-to-mass from simple size-invariant relationships.

We suggest that testing the underlying assumptions of allometric models more generally is an urgent priority as this has wider implications for climate mitigation through carbon sequestration. Forests currently act as a carbon sink in the UK. However, the anticipated increase in forest disturbances makes the trajectory and magnitude of this terrestrial carbon sink uncertain. We make recommendations for prioritizing measurements with better characterized uncertainty to address this issue." 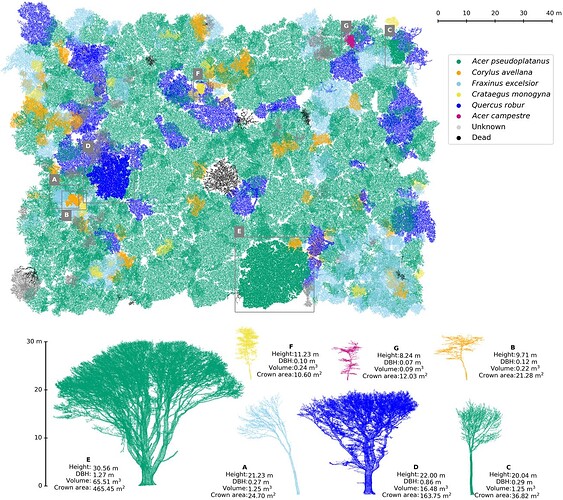 I love these images that came with this paper. If you look at the full paper they have full canopies like that for hundreds of trees. I don’t know if they were sketched or created with LIDAR or what but it’s the most detail I’ve ever seen in one forest ecology paper. So neat.

Will it end up with scientists starting to think that the Earth has much more capabilities of carbon storage than how much ballyhooed in the last few years? Who knows…