Automatically add a spectrogram view to observations with sounds

Maybe have an “Evidence of Organism” toggle for everything that’s not a photo of the animal itself, and then exclude that from CV learning?

11 posts were split to a new topic: Question about evidence of human activity

I don’t have experience processing sound but I’m wondering if bat recording observations are rare enough relative to other kinds of sound that it could default to eBird-like settings and then have a button to show the full spectrogram? (analogous to the zoom/brighten buttons for images) I’m not sure if insect sounds are more similar to birds or bats.
I guess one potential issue with that is if it means you have to save two images for each recording.

@kueda: My opinion based on somewhat limited knowledge of ML and computer vision is that you already have that problem with “garbage photos” - ones that are misidentified, ones that have insufficient resolution or clarity, ones where the specimen is very small, ones where multiple species are depicted. Yet the algorithms handle it. Suggestion: if a particular image comes back with very low likelihood of being the depicted species, have it autoflagged as “identified species not visible” so that the image is not used, or is used properly, as part of a training set. Then we could include hostplants, spectrograms, weather conditions - parts of the field notes that are desperately needed.

Imagine a world where the spectrogram could be used by AI for bird ID, instead of what happens now – one posts a sound recording, and within a couple of years someone else finds it.

Not to beat a dead horse, but I thought the AI response to my sparrow song was funny: 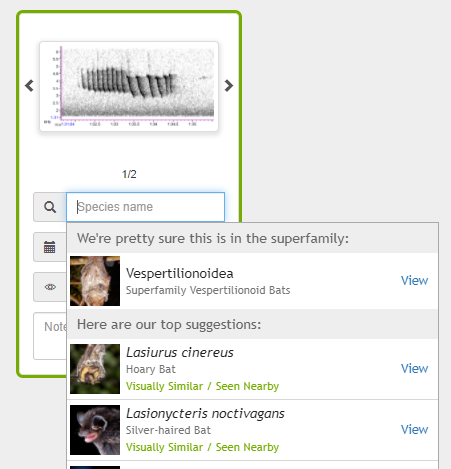 Like it or not the AI is picking up on spectrograms, and as of now bats beat birds in the spectrogram-to-photograph ratio. Perhaps “spectrogram” could be established as a “pseudo taxon” that the AI learns to recognize, and then never has to suggest.

what happens now – one posts a sound recording, and within a couple of years someone else finds it.

my experience is that birds are identified fairly quickly on iNaturalist, if they can be identified easily, even if the only evidence is audio.

BirdNET – The easiest way to identify birds by sound. (cornell.edu)

there are a couple of videos on that page that give some basic explanation of how they do their thing. when asked if their algorithm could be adapted for animals other than birds, the answer is “maybe… other animals are using other frequency ranges than birds, and it gets more challenging for insects who are using higher frequencies, and it gets more challenging for bats… you need more specialized equipment for that [rodents, bats]… you can’t use your phone for that…”. apparently, you could theoretically leverage their open source code or even hook into their API to develop your own apps.

to me, it seems like it would be a lot of work for relatively little benefit to develop something specifically for birds in iNat, considering other things already exist. if you’re going to develop something that can cover any organism, then that might be interesting, though probably exponentially more challenging.

also, at least right now, the number of observations with sound in iNaturalist is not very large – so there’s not necessarily a lot of data to train on. currently, there are only a little over 144,000 observations with sounds (mostly birds), representing just under 6,000 species. but if you look at how many of these species have more than 100 observations, you’re sitting at around 270 species, and if you limit that to just research grade, you’re down to around 240 species.

a lot of the data submitted is not even actually audio, since spectrograms are technically images, not audio exactly…

I like this idea a lot. Having spectrograms attached is really useful, and if displaying them from the .wav file isn’t possible, this seems like a reasonable solution.

I dont know if Tadarida Toolbox makes spectograms but it can tell you which species the sound contains. I thougt it was used for online websites in UK en FR. 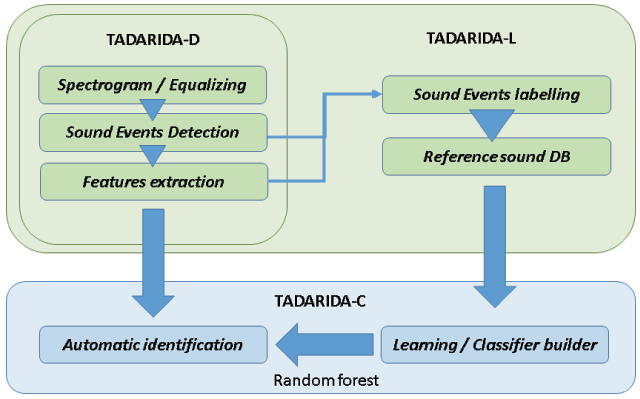 Is your suggestion that iNat implement code for doing “computer vision” on .wav files? That would be interesting, but would still necessitate people confirming IDs to download the .wav file, look at it in a sonogram/spectrogram viewer, and then come back to iNat to add their ID. I often end up doing this when a .wav file is uploaded anyway, but sometimes that step isn’t necessary, and when it isn’t you’ve saved several minutes of steps and therefore can make more IDs. There’s a massive backlog of potentially identifiable acoustic bat observations on iNat, and very few people who both have the expertise and time to work on them. Making it faster and easier to do could help with that.

You need only a few mammals, crickets and birds so the hit ratio was high.

Audio is for your ears.

Light for your eyes.

I don’t think it would work very well. Most sounds in observations are very poor quality, have lots of noise, and are very long (not to mention the frequency range of interest). If you automate a spectrogram then you will not be able to pick out the important bits in most observations. Why not, as the observer or identifier, just edit and create the spectrogram yourself (that’s what I do), and then I upload it as an image (or download the sound if you are identifying). Audacity is free and very easy program to use for this.

The Merlin app is remarkably good at ID by cruddy wavefile - better, in fact, than by photoID. The reason, I think, is that it picks out specific frequencies in a 1D FFT and maps them to a relatively small set of signatures. Thus, a lot of the noise is irrelevant.