I’m starting to sketch out some presentations to local gardening groups next year that highlight pollinators, especially the wonderfully diverse native bees of New Mexico. I want to address common false ideas, so who better to ask than this forum.

Which ideas have you heard in circulation or used to think were true? Thanks!

So there are female wasps that can’t sting? Are they too small or they don’t have the means or…?

(Assuming wasps are like bees in that the males never have the ability to sting?)

All bees look alike (usually like a Western honeybee).

Flies do not pollinate.

(Above are falsehoods, obviously.)

By sting, I assume we mean pierce human skin (worth clarifying). Most Parasitica wasps can’t do this and wouldn’t anyway, because their ovipositor isn’t meant for self-defense. If you include ants in “wasps”, that’s another large group that doesn’t sting. Also, here’s a wikipedia excerpt

Stingless bees, sometimes called stingless honey bees or simply meliponines, are a large group of bees (about 550 described species), comprising the tribe Meliponini[1][2] (or subtribe Meliponina according to other authors).[3] They belong in the family Apidae, and are closely related to common honey bees, carpenter bees, orchid bees, and bumblebees.[2][4] Meliponines have stingers, but they are highly reduced and cannot be used for defense, though these bees exhibit other defensive behaviors and mechanisms. Meliponines are not the only type of bee incapable of stinging: all male bees and many female bees of several other families, such as Andrenidae, also cannot sting.[1] Some stingless bees have powerful mandibles and can inflict painful bites.[5]

“A wasp is any insect of the narrow-waisted suborder Apocrita of the order Hymenoptera which is neither a bee nor an ant; this excludes the broad-waisted sawflies (Symphyta), which look somewhat like wasps, but are in a separate suborder.”

Nannotrigona perilampoides, which I just noticed I am the top observer of, huh, would never be so gauche as to bite. That said, you can see their wee mandibles here. (There are two colonies in walls in the garden.) 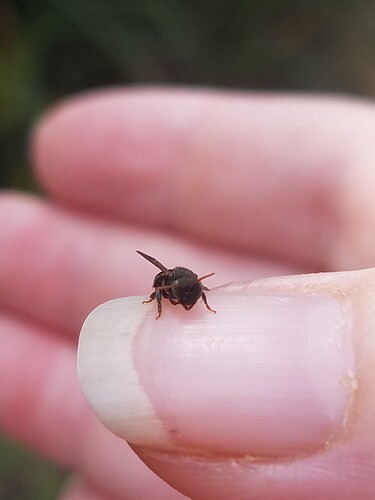 We need to save honeybees!

We need to save ALL bees.

ALL bees? That sounds difficult

Ok sure, but the point of the comment was about good-hearted people wanting to help but focusing their attention in the wrong direction, especially in locations where honeybees are nonnative.

EDIT: This is in the context of I guess aiming to maximize the biodiversity of native species, I think…

EDIT x2: Very interesting article regarding the issues with honeybees

This is a real issue here. Is it not there?

Oh my goodness, I just realized this was your myth. I thought you were promoting the “save the honeybees”, which, like all things, made its way here and there are like forty-kablillionty native non honeybee species that are in a little more need of saving.

Please forgive my idiocy. (I reallyreally need the Copa to end so I can sleep again.

No need to apologize. Your genuine concern is refreshing.

Mexico is a lost cause though. No offense outside Lozano.

I have the tiniest garden, it is so small by US standards, but nonetheless I have seen 19 species of bees in it. It just renders me in awe. It’s staggering.

(I am clinically stupid at this point, for sleep deprivation. And pshaw, I still have hope; there’s one thread-the-needle way MX could continue, involving the results from both games Wednesday. But they must play Henry Martín! El Yucateco!)

I usually hear wasps and hornets are evil and want to bite you, and bees a good.
But here wasps mean Aculeata that are not bees. So, to add, ichneumonids can’t sting: they don’t have stinger, but once I tried to catch a pimplid with bare hands, ir stand my hand and red dot was swollen and itchy for a couple of days. There’s a reason evolution worked this way on wasps.

The misconception of planting to “attract” pollinators. If the pollinators being “attracted” are honey bees, they are probably just being attracted away from the crops they were intended to pollinate.

My favorite thing to point out when people think that all pollinators are bees is what a major pollinator of Agave is, bats. So if you like tequila, then you should like bats. Flies as the ones that bring us chocolate usually surprises people as well. Correct me if I’m wrong but isn’t it a wasp that is a major pollinator of figs?

But yeah, the list you have covers the usual myths that just won’t die.
One to add:
“To save the bees we need more dandelion and clover filled yards!” Ehh, it may help a little but it’s more of a band-aid. I’d like to know why when discussing birds everyone seems to understand that they need food, water, cover, nesting, but when discussing bees, apparently they only need food.

In Europe, this probably works

I’ll make sure to highlight this. Especially because people interfere with ground-nesting bees by use of plastic “weed barrier” and paving everything.