@dlevitis Yeah, it’s because fish are rather hard to photograph normally and clearly enough to get an ID. Especially small fish and fish that hide.
The only reason I have a lot of those rare fish observations is because I catch them first before tasking pictures

For bees - over-representation of larger, more charismatic species like Bombus, while smaller species are noticed far less - may also work for other species.

Plants - under-representation of pods and seeds, which are not exactly the same as fruits, right?

Plants - under-representation of pods and seeds, which are not exactly the same as fruits, right?

Botanically speaking, they actually can be fruits. However, any plant that isn’t showy is likely to be underrepresented. This goes for flowers as well (e.g. grasses in bloom). Overall, I suspect plants that have evolved to attract animals for pollination and/or seed dispersal are much more likely to be noticed and photographed than plants that utilize wind dispersal, for example. Add to it that grasses and similar are hard to key out and identify, especially from pictures, and they are probably heavily underrepresented on iNat.

What about species that are icky or ugly? Got any good examples?

“Endless forms most stupid, icky, and small: The preponderance of non-charismatic invertebrates as integral to a biologically sound view of life” https://doi.org/10.1002/ece3.6892
https://ecologyforthemasses.com/2020/11/12/reframing-evolution-to-focus-on-the-stupid-icky-and-small/ 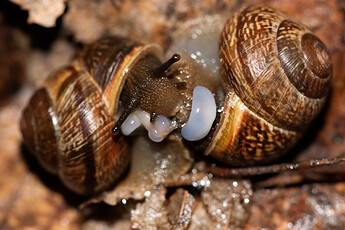 I know people who are in it for the ick. But you are likely right that things that disgust many people are likely more often overlooked.

How do I access the trips feature? How do I get to the form that allows creating a new trip? I see the form described here: https://www.inaturalist.org/pages/trips but how does one get to that form?

As it’s not supported, only using url: https://www.inaturalist.org/trips

I’ll note that iNat’s social media posts of “icky” or “weird” organisms are almost always the ones that get the most views. Pretty pictures of lions or birds are among the worst performers if you go by that metric. Our audience seems to be into the non-mainstream stuff.

Oh, thanks! I didn’t notice the big “New Trip” button on the right side of that page. I think I have a good use for this but will explain that further in the trips that I’ll create.

As for biases, I do have a few thoughts to throw in here.

It seems to me that the iNat data en masse can actually be used to develop a measure of the biases involved, by first computing a “denominator” for each taxa that sums all “expected - actual” population numbers (based on theoretical or “best-known” estimates) in order to “normalize” our actual observations. These ratios could then be factored into “root causes” such as the factors already suggested in this thread, and ratios developed for each of those factors. Thus one could develop an iNat Bias model.

…also, the concepts of “method detection limit” and “instrumentation sensitivity” might be measures worth considering.

Our audience seems to be into the non-mainstream stuff.

These are my people.

Thought this recent paper might be of interest to this group: Deriving indicators of biodiversity change from unstructured community-contributed data. It’s pretty much about how to overcome the biases and “messiness” of iNat data to find patterns and see change through time. I apologize that it’s not open-access - Wiley’s OA fees are prohibitive, and since this was grant-funded work we couldn’t afford it. Our co-author did a nice tweet-summary of it where you can see some of the figures describing the work. I’m also more than happy to send the pdf to anyone who’s interested in reading the whole thing!

Could you please show screenshots of that tweet? My computer has complicated relationships with twitter and site don’t want to show anything without my phone number. 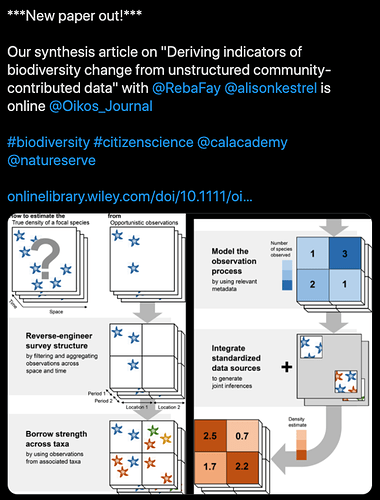 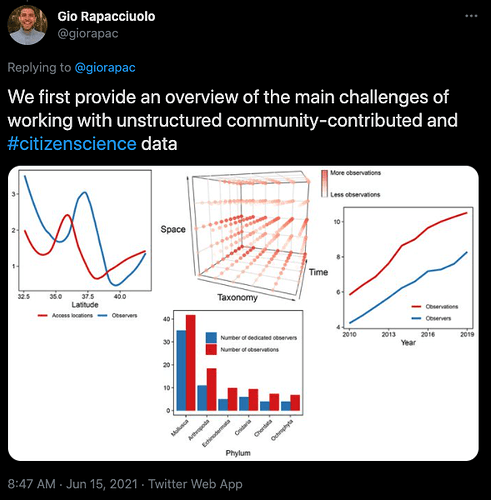 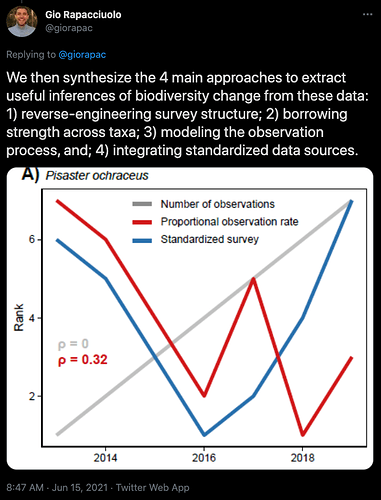 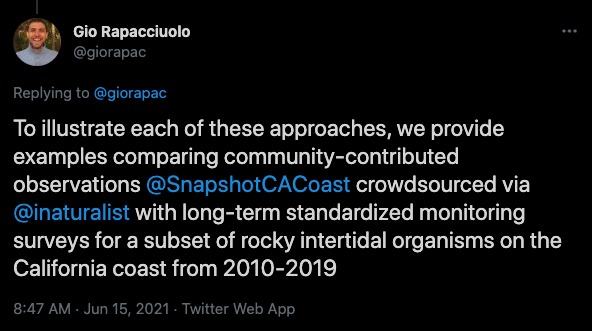 I have only dipped in and out of this discussion, so apologies if this has been discussed already. But what is meant by biases? What would be an example of a species that is not biased, neither under- nor over-represented? Or is it assumed that everything is biased and it is just a matter of deciding which of the two categories applies in each case?

I understand under-representation of e.g. difficult to photograph common species. But for the charge of over-representation to apply, it suggests to me there would need to be some falsity in the sightings, e.g. if chiff-chaff was over-represented because too few people were considering willow warbler.

Overrepresenation in this case is either in comparison with other species or, if we talk about one sp. only, it’s geographical biases, so species is overrepresented in cities and underrepresented in countryside while actual distribution can be reverse. Overrepresenation doesn’t actually mean we need to stop observing it or observe less.
Not-biased species would be one that is observed everywhere as often as it actually, well, exists there, it’s possible if all parts of its areal are heavily studied by users and, realistically, it’s an easy to recognise species. It’s hard to achieve, e.g. mallard is heavily presented in cities, while it actually lives pretty much in every other possible water bodies across its range. It’s also needed to be noticed that when we usually refer to unbiased set we talk about some works on pretty small areas, where sampling was done with methods that eliminate human factor as much as possible. When we go iNatting there will always be biases unless we get to the point of getting tons of data from every corner possible.

There will always be biases in these sorts of datasets, but based on this study, we can identify some clear pointers for those who want to help compensate for them:

Some of us are already doing that. But I would add a few more.

As a corollary to

focus your observing on less charismatic groups, such as plants, invertebrates, fungi and even bats, rather than on birds and large mammals

How 'bout: make a point of learning to identify the above! There are observations of particularly fungi and invertebrates which have sat for years at very broad identifications. Learning how to refine these can in many cases help even more than adding yet more observations of the same. Instead of hoping that a specialist will help with your observation, pick one of these taxa to BECOME a specialist in.