Bunny chowing down on toxic rhubarb

There’s a bunny who for weeks has been eating our rhubarb. Everything I read says the leaves are toxic so it’s puzzling. he’s not desperate for food or water there’s plenty around including green beans and tomatoes still within his reach. It’s strange he really goes for it and appears to be fine. Wondering if there’s a mineral or something his system is depleted of and needs. Or if anyone has any insight. 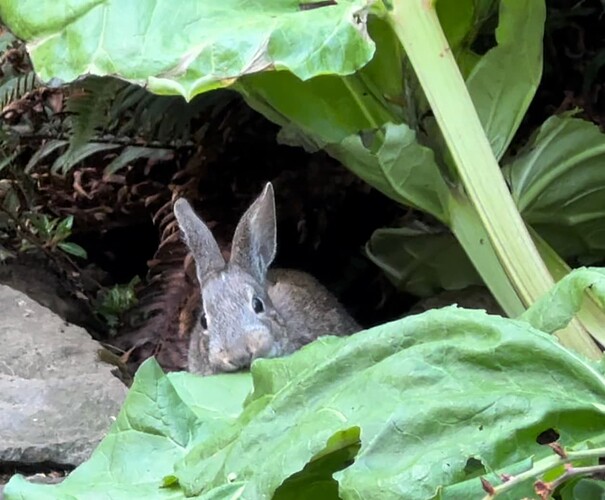 Judging from how pets react to such plants, kidney problems because of oxalates need time to appear, usually months. They will eat what they find tasty, including much more toxic plants, so I have no answer why he eats it specifically.

Interesting thanks for the reply, I always assumed that animals know what’s toxic to eat or not (in the wild). That’s obviously not true as I’m witnessing! We’re cutting it back for winter soon anyway so he won’t be able eat much more of it.

Whenever a brushtail possum got into our garden it would strip the leaves off the rhubarb. Many animals are better able to cope with some plant chemicals than humans are, but I don’t know about rhubarb specifically.

I got curious about this and did some poking around. Turns out bunnies like a lot of high-oxalate foods, including dandelions. But many omnivores and herbivores - including humans and rabbits - have a gut bacterium Oxylobacter formigenes that breaks down oxalates. It appears that a healthy gut would protect rabbits from the potential consequences of a high-oxalate diet.

I actually didn’t realize how many of the foods I eat a lot of contain moderate to high amounts of oxalate: spinach, beet greens, celery, parsley, endive, etc. I probably have my gut bacteria to thank for handling those oxalates for me.

It’s possible that a higher percentage of domesticated rabbits never acquire this bacteria, and are therefore at risk of stone formation. This may have led us to believe wild rabbits are equally vulnerable…?

That makes sense; domesticated vs wild who I imagine have a much more varied diet. I didn’t realize that either and now that you mention it, I recall oxalates are considered anti-nutrients that can block absorption in humans.

It’s super interesting regarding wild animals having possible higher tolerance because what got me thinking was watching how baby chipmunks eat a variety of greens voraciously, not just a nibble. The adults rarely do. They love dandelion also and red clover which has oxalates.

It’s fascinating how you can observe these small behaviors!

All such bacteria are transferred with scat from one animal to another as well as more regular ways, so it’s unlikely something crucial would be lost in domesticated animal or it wouldn’t survive, after all those bacteria don’s serve just one function.

As an ex pet bunny owner that has for years been deeply submerged in the scene of suplporters of species-appropriate housing (meaning for example cage-free housing as they can easily be potty trained, keeping in social groups and as well natural ad libitum food provisioning) I can tell you that rabbits have a very wide range of food.

They are know to be very well able to self-medicate in the wild (and as pets, if they get the chance to selectively eat). If they get the choice they are extremely good in knowing what they need to stay healthy and will eat a variety of herbs and shrubs over the course of the day. As such I would assume that “your” rabbit probabaly only nibbles on the plant but does not eat large amount every day? As with so many things in life the dose makes the toxin. In larger amounts the oxalates can damage the kidney of the rabbit, but in smaller amounts its harmless

Hard to say - I don’t know about rabbits, but we have goats, and a good bit of their gut bacteria have to be acquired from soil consumption rather than scat. (It’s amazing to see a kid get its first mouthful of dirt and a few days later start producing dark poo, rather than the orange tootsie rolls it makes initially. And all with an exclusively milk diet. Just incredible.)

We know that populations of humans who rely on a heavily processed diet are missing huge numbers of gut bacteria species that are present in populations whose diets rely less on processed foods. It certainly contributes to disease, but it’s survivable.

You make a great point about species-appropriate housing… we can’t know what’s appropriate for a given animal if we don’t understand how their wild “cousins” live. We simplify and anthropomorphize their needs. “But you have a plushy toy to snuggle with and you’re in a cage safe from predators, what more could you want?” Never mind that a cage doesn’t feel like safety, and the toy is full of nasty chemicals.

And I suppose every wee bite a rabbit takes out of my garden looks to me like it has consumed bushels of food.

and yes @Ajott you are correct now that I consider it, maybe about 6 square inches of a leaf is nibbled each time and he’s a pretty big bunny.

From the little I know of Rhubarb, the toxic effect of eating it stems mainly from the presence of fine crystalline shards present in the leaf epidermis. Upon getting lodged in the esophagus, these can cause a nasty reaction aside from the pain of penetration and swelling. Maybe this species of Rabbit is physiologically adapted to negate these effects? Maybe its a fairly recent change as its food availability in the northern hemisphere is no doubt changing with the onset of Climate Change?

Could be an interesting research topic!

The teeth of rabbits grow throughout their lives, up to 10 centimeters a year. Therefore, they must be worn down regularly, otherwise there is a risk of abscesses and starvation. The most suitable for this purpose are things that contain a lot of raw fiber and other hard elements. As a rule of thumb for herbs and leafy greens, the darker the green, the better for tooth wear. It’s also quite possible that’s what’s behind eating rhubarb.
I’m not sure there needs to be much short-term adaptation involved… as I said, in small amounts it’s not too concerning, as with many other plant substances and toxins.

Regular grass is the best for that though.

Such interesting information, thank you. It got me thinking how the only other thing I see him eating is something called skunk cabbage and according to google it’s also toxic to bunnies due to a high concentration of oxalate crystals. What a mysterious little guy! He was back at it again today looking perky and plump as ever. According to Seek ID he’s a brush rabbit (sylvilagus Bachmani)