Many of our users rely on the the default taxon photo when selecting an ID from the list of suggestions. To give them the best chance of choosing the right species, it’s important that those photos are the best representation of the species that we have available. The additional curated photos can help users decide between similar species.

I was surprised today to discover that Fremont cottonwood, a species with hundreds of observations, had single, poor quality default photo. I try to curate photos as I run across ones with few or no photos but there are many taxa that need attention. The website pages show up to 5 photos and the apps let users see up to 12 photos so we should be using them.

Here’s my process for selecting photos, I would love to hear feedback from others. (Below primary=the default photo, secondary=the other curated photos)

That’s all I’ve got, I hope it helps!

It should be mentioned that using the compare feature on the iNat website, you can see the first and the second photo.

One more suggestion: If you know your plant’s genus has a homonym in another kingdom, look for an example that will most obviously present itself as “a plant” when appearing as a tiny thumbnail in the suggestion dropdown.

Ideally, someone should also choose a similarly clear “in this kingdom” example for the other homonym.

Good choice of primary and second picture, as seen in the compare view of the website.
First picture shows the round unsegmented trunk typical for the genus “Consolea” (A cactaceae often confused with Opuntia). The second picture shows details of the sculpture of the pads that are species specific, as well as flowers. 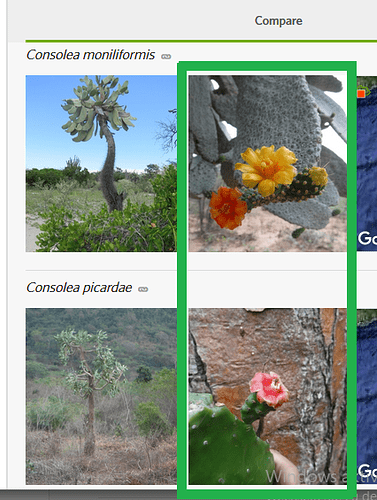 Bad choice of secondary picture, as seen in the compare view of the website.
First picture is not very good, as it shows a closeup of a flower but no leaves. At least the flower is typical for the genus. Second picture is a very bad choice as it does NOT show additional diagnostic characters like leaves, or total plant, but just another closeup of the flower.

Can you guess from these pictures that this is a vine? Probably not. A picture of a rare flower color or of isolated seeds makes sense as picture number 3 or 4. However not as the only additional character shown in picture number 2. 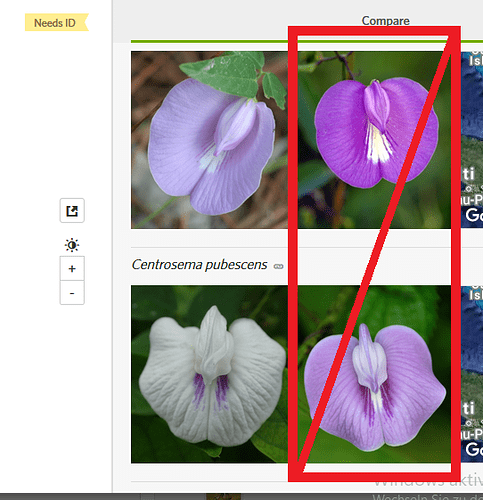 I agree that the first and second photos should show different aspects of the plant and should include parts that are important for identifying the species. Thanks for the examples.

Yes, if you can’t tell a plant is a plant in the first photo, it’s probably time to pick a different photo.

I did want to underline how important # 8 is. Please do make sure that the photo really does still look clear,and good for ID, even at Thumbnail size!

I also wanted to emphasize that the first image should not be chosen on the basis of how “cool” it is, or what a great artistic photo it is in general, or whether it is your own particular favorite image for whatever reason.

Being a good clear image which helps show the way to the correct ID for the species even for a complete beginner, and even at a small size, is more important than how pretty or unusual the image is.

And I totally agree that in most cases a super close-up is inappropriate.

Something I just learned this week, that is relevant for point 5.
When selecting taxon photos, you can put in the number of a SPECIFIC observation that you know has the features you are looking for in the taxon photo selection box.

Sorry if everyone already knew this. A bunch of participants at the link were surprised to learn it, so I thought it could be useful here.

Thanks, that’s helpful for species with a lot of observations but not a lot of good photos!

I agree with a lot of what you said @jdjohnson. I would also use concepts of design to choose photos. Many users use their phones which makes the photos tiny, so I think it’s preferable to use photos where the colour of the background contrasts the subject, allowing the species to retain it’s shape even when small. I also think the subject should be centered in the image.

Yes, contrast and centering certainly helps make the image better for the thumbnail.

This feature request about attaching metadata to the photos in a plant taxon page could help a lot to identify observations, in particular observations showing only a flower, or only a fruit. (Add a “like” (over there) if you would like to get it!).

I can’t find it now, but I think for #1 there was a thread where someone mentioned that a lot of them could be fixed with a script. Basically if the picture for a species is from an inat observation and that inat observation is of a different species, this cannot be correct. And I definitely do run into cases like that from time to time.

Also, if the default picture is not from a RG inat observation (but flickr or non RG etc.), the script could probably flag those as well if an RG observation exists, in most cases that is a better choice.

I think that no script running in the background is needed. These triggers should be enough:

Because a very small minority of observations would be flagged source_of_taxon_photo=true, the cost of the 1st trigger should be very low (hence no need for a update script running periodically in the background).
Because updating a taxon page is much less frequent than other actions (such as displaying/adding/identifying observations), the cost of the 2nd trigger should be very low as well.