Does anyone else get bothered by how many observations are marked as "unknown species"?

Naturing, a Korean citizen science site that I mentioned earlier in the thread, only has two identification options – “I don’t know” and species-level – but they do require users to put observations into classification bins as has been suggested here (and elsewhere in the forum). Here’s how that looks on the observation upload screen: 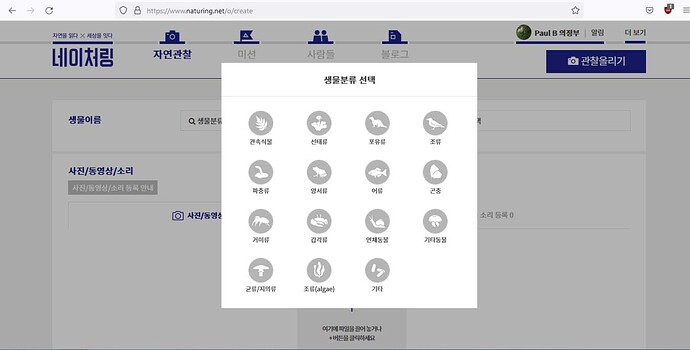 Of note, the second icon (선태류) is for bryophytes, 조류/algae is its own category, the jellyfish icon/기타동물 is “assorted animals”, and the cell-like icon/기타 is a final ‘assorted’ category.

Naturing also has a screen that asks users to select the environment where the observation was seen: 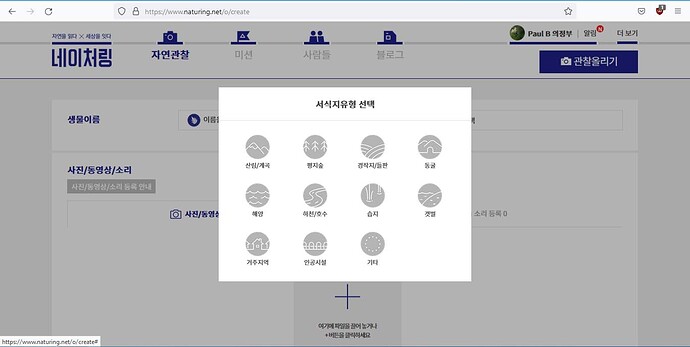 There are differences in how making identifications is handled as well, but that’s for a different time/ discussion. I do prefer iNaturalist overall, but thought I’d share how another site handles a similar aspect.

If the person really has no clue, they could ID it as state of matter life.

Yes, but how many new users even know that SOML is an option? It rarely gets suggested by CV.

Just note that it is an option in all of the “how to use iNat” tutorials.

they could ID it as state of matter life

I doubt it makes a difference in who sees the observation.

I think Raymie is just saying SOML already means “I really don’t know”, without having to add something new.

I think the problem is that in the current iteration of iNat, SOML is rarely a suggestion, hence kmforum’s suggestion to have a popup forcing new users to choose a coarse ID & matthewvosper adding that “I really don’t have a clue” be included in that popup of coarse IDs.

I don’t see a problem with mapping the existing SOML to “I really don’t know” in the proposed popup. It’s just not obvious to new users that SOML is even an option under our current iteration (thus Raymie’s suggestion to add it to tutorials, rather than waiting for new features/functionality to be added).

Though you’re right that SOML is not that different from unknown in terms of the ID pile, which is why the tangent re: forcing new users to select a coarse ID (with the option of SOML included as an out for when even that is too much)

It would be cool to have it as a separate button e.g. “I have no idea” where it would generate Life id.

I think the observations that are there due to ID conflict are different than the ones which just need further ID. It would be very useful if we could sperate the two, not just in SOML but anywhere.

fair point. You can’t use &identified=false (like you can with unknowns), because obvs with 1 ID of SOML as “I don’t know” would be filtered out along with obvs where multiple conflicting IDs brought it to SOML.

Wasn’t there a feature request to distinguish those?

This one sounds relevant: https://forum.inaturalist.org/t/add-url-parameter-to-only-show-observations-with-disagreements/30308

Can you help ID some of my succulent observations?

The forum isn’t really a place to ask for ID help. Best to tag the person on a few of your observations on iNaturalist itself.

I tagged you in the observation

To be honest, there are observations that defy normality, such as a large solitary wasp in upper east Tn, and no, it isn’t a cicada killer. Very rare to see one, thus no pics available. Don’t dismiss it as a lack of info or something outside the algorithm. I have seen two of them in my entire lifetime and they defy all possible identifications. Of course many people observe a common creature and and perform a half dedicated research of it, but there are a few without explanation.

I tagged you in the observation

I don’t know if you were being funny or serious, but I’m literally still laughing

It came across like you tagged tiwane, when he told you it was better to get ID help by tagging on iNat itself.

Turns out it was me who was confused, but that’s ok; I still think it’s funny. (don’t mind me, I think lots of things are funny:)

I thinks lots of things are funny:)

Same here. what other kind of things do you think are funny?

To be honest, there are observations that defy normality, such as a large solitary wasp in upper east Tn, and no, it isn’t a cicada killer.

But that wouldn’t be an unknown. It can at least be marked as order Hymenoptera. Or if someone suspects it is a mimic, then Winged and Once winged insects. Heck, even Insects, Arthopods or Animals would work; There’s no reason for it to be Unknown.