Dove is missing half its body? 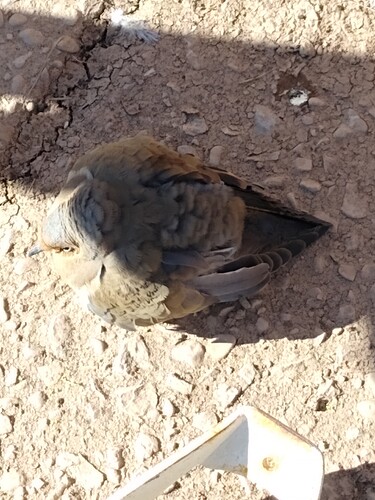 I’d just post your photo on iNaturalist and see what people say there.

I can’t believe it!

What predator would leave half the body there?

(If this isn’t a joke and you are honestly looking for an answer, the head is tucked into its plumage.)

That bird looks pretty grumpy too! That face!

I’m not sure what you mean here, it’s a full bird. Birds can live without tail feathers, they’ll grow back.

It’s a dove without tail feathers. It’s probably OK. The bird can suddenly shed all its tail feathers if something grabs them. A desperate measure that allows the bird to escape. Looks bad, but the damage is usually temporary.

As others have said, this bird is only missing its tail feathers, not part of its body. At this time of year it’s very unlikely to be a young bird whose tail feathers haven’t grown in yet, so it’s probably an adult which is in the middle of moulting and regrowing its feathers, or one which lost its tail feathers to a predator (somewhat less likely, I think).

Many species moult their feathers yearly, including Mourning Doves. They are known to moult and regrow their tail feathers after their body and wing feathers, usually during fall or winter.

The hunched up posture can be explained by the temperature at this time of year. I’d be all fluffed up and hunched in if my tail feathers were missing too!

or one which lost its tail feathers to a predator (somewhat less likely, I think).

Birds don’t moult all of tail feathers at once together with tail covers though. Pigeons loose their tail very easily if you grab it.

I’m now just realizing that you meant the back half of the body, not the head. I apologize if you received it the wrong way.

Similar to this thrush which was hopping around and appeared unharmed but seemed unable to fly:
https://www.inaturalist.org/observations/539375

I considered the observation as only 2/3 or maybe 3/4 of a rare bird sighting.

I saw a California scrub jay with no tail feathers. Truly weird

My dog has no nose.

How does it smell?

I once saw a scrub-jay drop all its tail feathers at once when a accipiter dove at it. The hawk caught one tail feather, as far as I could see, and the whole tail popped of.

it is amazing how much of the perceived ‘size’ of a bird is just fluff, especially in cold climates during winter. Aren’t chickadees barely bigger than a grape? They puff up to almost the size of a baseball when it is really cold.

Or the comparison of the mourning doves … geez their heads look so tiny when the fluff is up!

White faced owls, but a lot of owl species can/will do that.
http://artusobirds.blogspot.com/2014/12/signs-of-stress-in-owls.html

Mine was an African species and the thin mode was a good contrast to the taxon photo.

This reminds me a bit of Rhea the Featherless Bird (warning: sad), but really surprised that under all of those feathers, birds are essentially just large chicks. I assumed they changed a bit more than just growing feathers, but I guess not?

Looks like a canid did a number on it.

I found a Turquoise Jay in very similar condition once, this was immediately after we encountered an a culpeo (andean paramo wolf) on the trail, we surmised that we startled the culpeo enough to make it abandon it’s meal, because we saw that jay hopping from tree to tree, but largely refusing to fly, very odd behavior for a jay in this environment otherwise.

I’m sure I have a photo somewhere, this is from around the time I began to stop contributing new obs. to iNaturalist.