I understand this may be off topic.

I wanted help to understand the dynamics of Golf Courses.

The native ecosystems they may replace, the usage of resources (water, pesticides etc), displacement of people.

The aesthetic value they bring or not .

Also are there eco-friendly sustainable golf courses - and what do they look like.

a golf course within a natural area is probably a disaster for the native ecosystems there, but a golf course placed within an otherwise urban area is probably a net positive for fauna within and near that space. the golf course at one of the big urban parks in my city is one of the few places were i’ve found fireflies in the city. the ponds there provide a home for several types native turtles, various fish, different water bugs, dragonflies, etc. all sorts of birds, including bald eagles (which are relatively unusual in the city), hang out near the golf course.

of course, i can think of ways that an urban golf course could end up being a disaster for urban wildlife, too. for example, if they decided to poison the rats that are plentiful in the area, that could end up killing many of the predatory birds. or if they used certain bad chemicals on the lawns, that could end up running into the water traps, killing all the pond life.

i don’t think you could call any golf course eco-friendly exactly. some are definitely better than others, but any way you look at them, they’re generally a bad use of the land for both nature and people alike. maybe if your native landscape already resembles a golf course, and you could just make small modifications to it to play golf on, that might be the best kind of golf course, as long as you didn’t end up allowing more people into the area than it could handle without being destroyed.

Apart from the nature / ecology side of things there is the whole gamut of eco-political issues. As well as how open access are golf courses - most I know of (in India) are closed for the general public and are membership based . Some times “public land” become less public is one more issue and could that land have been converted to another type of green space (biodiversity gardens etc) which enable more diversity of uses.

Mostly not. Waste of water in landscape subject to Day Zero issues. Agrichemical runoff to our source to sea Silvermine River.

But. Steenberg golf course is irrigated with grey water from nearby housing development.

(Can hunt down links for you if you need them?)

I can’t find anything positive about golf fields, even in urban setting it’s better to plant some flowers here and there between builduings than wasting all that area (forcing builduings to be built further). If the game demanded a growing field that would be moved, but made of different plants, maybe it’d be different, but the pristine look it needs is not what wildlife can prefer. I also know how some people wanted to buy part of nature reserve for golf, on the sea cost with huge winds, so these people also are ready to destroy unique places to built something that sounds awful.

(Can hunt down links for you if you need them?)

what are Zero Day issues ?

It depends on the practices of the golf course (I heard of a local course that fired their grounds manager some years ago for using Lead on the course). And to be honest, whenever someone who is not a conservationist (ie golf course owners) says they are using green practices, I worry, that usually means that the “good intentions monster” is about the place. As an example one local course manager was proudly telling me how they help pollinators on the course, by putting out honey bee hives. Oh good, instead of trying to offer forage, water, nesting, cover for natives species, let’s fill up the landscape with disease infested little plague rats and say we’re “helping pollinators”.

However, I have birded a few golf courses and been pleasantly surprised by what’s there: I’ve never birded one that I didn’t have owls, there’s always Cedar Waxwings and Bluebirds, and the ponds and creeks can have some good stuff in them. For the Christmas Bird Count that I run, that was one of the suggestions that I wrote for new counters. https://www.inaturalist.org/projects/rock-cut-christmas-bird-count/journal/56209-underappreciated-sites-golf-courses

says they are using green practices, I worry, that usually means that the “good intentions monster”

However, I have birded a few golf courses and been pleasantly surprised by what’s there

I have been to a few golf courses , in the era before ebird and inaturalist and truthfully have seen a bunch of stuff that one would not see in a urban landscape easily.

However, not having compared a urban green space to a golf course I could not “scientifically” say which is better. There are a bunch of green spaces with mixed landscaping and a lot of niche habitats that are unsuitable for golf.

Day Zero is when they ‘threaten’ a city with no water. Reality check for many city dwellers!

It is disconcerting to use Google Earth to see where Cape Town is Astroturf green. While residents have water restrictions. From our January 2018 hikes. Between the GREEN and the brown flows Silvermine River 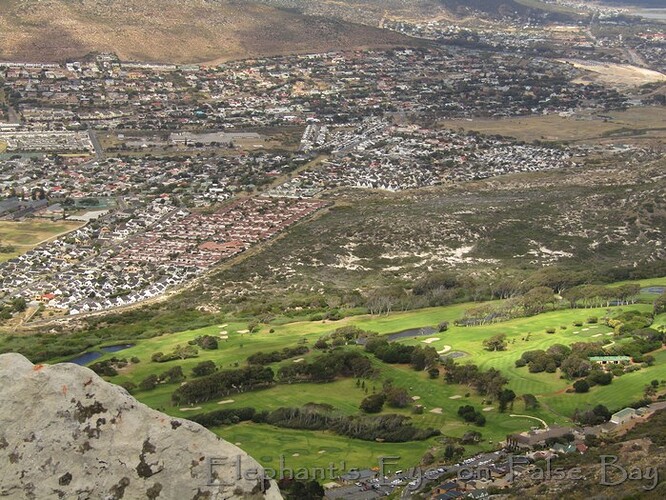 There’s a golf resort called Sand Valley in central Wisconsin that is also a nature reserve - the golf is there so that they can make money to restore the land, basically. There’s few small lawns, but the courses were carefully planned to have as little impact as possible on the beautiful and rare dry prairie habitat. The presence of species such as Kirtland’s Warbler and Slender Glass Lizard (both state Endangered species) on the property shows how effective the situation is.

I am not particularly in favor of land use as golf courses, although more are using reclaimed water and greener maintenance practices these days.

In San Francisco Bay Area, golf courses would, otherwise, ~quickly~ be densely developed as housing and commercial sites. Indeed, many golf courses here have been turned into condos and malls over the years.

So, golf courses end up becoming refuge green spaces that harbor many animals, especially the courses that abut open space or have streams left (relatively) wild instead of being confined into cemented waterways. Lots of birds (flocks of turkeys!), deer, squirrels, fox, coyotes, etc. take advantage of the water and fodder.

Of course, real open space would be much better, but the pressure to build, build, build over every acre of land here makes any space with trees and greenery somewhat useful to wildlife.

Although I dislike the idea of large areas of land in arid regions being devoted to manicured lawns that require frequent watering (even if it’s treated wastewater), golf courses do provide habitat for many birds and mammals. I often visit a golf course water-storage pond near my workplace and it’s drawn in many uncommon birds. Unfortunately the maintenance crew recently cut down many small trees and shrubs that had grown near the pond, maybe as a water-saving measure. A reminder that the habitat is first and foremost for golfers, not wildlife or naturalists.

I’d echo most of the answers here (that they’re generally not a net positive, but can serve as patchy parks and refuge some interesting biodiversity if managed well.) We recently touched on this in the churchyards thread:

I’ve been pleasantly surprised by this. Several nice golf courses along the Pacific coast in the USA have preserved bits of the original dune complexes for sandy rough and scenery, and I’ve had better luck finding (and getting permission to collect) some fly species there than in the narrow coastline parks.

(Edit: I’m not sure how to insert a blockquote with author linked in from another thread. Are people just doing that manually?)

(Edit: I’m not sure how to insert a blockquote with author linked in from another thread. Are people just doing that manually?)

I just quote like normal and cut/paste the code into the new topic instead of a reply to that old topic. 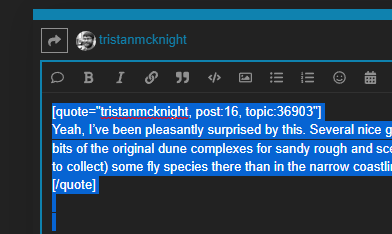 maybe if your native landscape already resembles a golf course, and you could just make small modifications to it to play golf on,

I have read or been told that as golf originated in Scotland, golf courses were meant to have similar features to the Scottish terrain. Greens resemble closely grazed pastures, roughs resemble “rough grazing” meadows, and so on.

The only ecologically friendly (or maybe just neutral?) golf course I’ve ever seen was in Afghanistan just outside Kabul. There was no grass because there was no irrigation. It was just rock, sand, a few goats, and lots of arthropods. You could even hire a caddy to guide you past the sand traps and remnants of war.