Hubby and I came across an interesting situation today on a hike. We were doing a hike in a relatively suburban metropark (wooded, along a stream, and while not entirely small, it is bounded on all sides by business or neighborhoods.) So we’re hiking and come across a spot with a bench where people have CLEARLY been feeding the birds - we stopped for a moment to just birdwatch and ended up having a couple of chickadees landing literally at our feet, and I briefly convinced a titmouse to land on my just by holding my hand out.

So it got us to thinking - is it okay? Generally feeding wildlife is frowned upon, but these were all species (chickadees, cardinals, titmice) that are not only known for being generally bold around humans but common bird feeder species. People aren’t going to stop feeding these birds regardless, but still, it got us thinking.

Will there be an issue with predators dropping in for an easy meal?

https://forum.inaturalist.org/t/bird-feeders-what-is-the-verdict/33595
Personally don’t see anything bad in that. 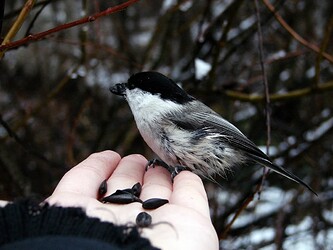 where people have CLEARLY been feeding the birds

As long as it was nutritionally appropriate food (i.e., birdseed as opposed to bread or other human foods), I don’t see any harm. I would perhaps discourage feeding certain species. For example, this Canada Jay started riffling through my backpack moments after I took its photo. Obviously, this smart and bold species has learned how to rob food at this popular hiking spot.

Studies have shown that responsible bird feeding has an overall net positive effect on bird populations. As you eluded too, other forms of wildlife should not be fed supplementally as it can have detrimental effects on both individuals (e.g., insufficient nutrition, habituation) and populations.

In urban areas wildlife are less disturbed around humans anyway. I remember reading about study on Common Ravens where the researchers said that nests that they checked in rural areas, the adults would fly away when the nest was approached, and in urban settings, the adults would be more assertive. When I find American Kestrels, usually out in the farmland, they fly away if I so much as slow the car down, but a nest that I found in town this year, they were rather unconcerned about my presence.

When it comes to hand feeding (besides the fact that it’s just plain fun), some species are more likely to do it than others, chickadees, nuthatches, and titmice are all known for it.

Fascinating. I may do some digging on these studies, that’d definitely be an interesting one to look in to.

My story is about birds but not songbirds, I don’t think. (To be honest I am not sure where the sound of a bird meets the song of a bird.)

The main plaza here is called the Zócalo. It is a large square within another large square, both lined with benches and tall trees, and it was very common for people to sit and admire and feed the doves and zanates there. And the birds became used to being tended to by tourists and residents alike.

Then when the quarantine began, the streets emptied overnight. Nobody came to feed them. The Zócalo and the surrounding streets were closed to pedestrians, and all streets were closed every night from 8 PM until 8 AM. After a few weeks, we heard the zanates had left. We were not sure where they had gone because we were all at home and rumors were rampant. We also began to hear about the doves dying, there in the Zócalo. People who snuck out to feed them at night reported heaps of their beautiful, pale bodies lying around the edges of the square. The municipal workers would pick them up in the mornings.

Now the city has reopened and there are people in the Zócalo again. There are also doves to feed but so many fewer than before. There are however no zanates. The zanates moved to the zoo and stayed there, in that place where people still came in to feed the animals, including birds, and they could find natural food sources as well. They do not come near people anymore but rather swoop down to pick up dropped items at a distance.

I think bird treating is lovely. Dependency is not.

Obviously, this smart and bold species has learned how to rob food at this popular hiking spot.

There’s a decent chance that the bird may have been taught how to do so by another bird.

Whisky jacks have been doing that ever since humans first stepped foot in North America. One of the First Nations on the west coast has a name for the bird which translates to “camp thief” or “camp robber”, a name which it’s also known by in English.

Found throughout Canada, the bird is popularly known by several colloquial names. One is “whisky jack”,[21] a variation on the name of Wisakedjak, a benevolent trickster and cultural hero in Cree, Algonquin, and Menominee mythologies.[51] Alternate spellings for this name include wesakechak , wiskedjak , whiskachon , and wisakadjak .[52] The Tlingit people of northwestern North America know it as kooyéix or taatl’eeshdéi , “camp robber”.[53]

Incidentally my favourite Wikipedia about a bird. They’re absolutely metal:

Canada jays have been seen landing on moose (Alces alces ) to remove and eat engorged winter ticks (Dermacentor albipictus ) during April and May in Algonquin Provincial Park. Researchers also found a Canada jay nest containing a brooding female, three hatchlings, and three warm, engorged winter deer ticks. Because the ticks were too large for the hatchlings to eat, it was hypothesized that the ticks may have served as “hot water bottles”, keeping hatchlings warm when parents were away from the nest.[38]

Definitely not worried about people feeding those birds a few nuts and seeds.

Studies have shown that responsible bird feeding has an overall net positive effect on bird populations. As you alluded to, other forms of wildlife should not be fed supplementally as it can have detrimental effects on both individuals

I think bird treating is lovely. Dependency is not.

If there were prizes for replies, I think this should win the thread. :)

If there were prizes for replies

For 10 likes on a comment the iNat forum nanny awards a Nice Reply.

Birds are different because we can readily offer nutritionally appropriate food. Sunflower seeds are nutritionally appropriate for songbirds, but would be unhealthy for squirrels in large amounts. Birds have a tendency to use supplemental food as a supplement, where squirrels, for example, will sit on a bird feeder and eat nothing else. This is also partly why I advocate for native plant landscaping/gardening to feed birds over supplemental feeding (my comment from the other thread linked below).

Birds also don’t have the same problems with habituation associated with the supplemental feeding of many other vertebrates (mammals specifically). This is not to say that their are no issues/concerns of habituation when feeding birds, just that it is less than with mammals.

Article: Why you shouldn’t feed wild animals (except maybe birds)

Bird feeders: what is the verdict?

The safest and most natural way of providing food for birds is by landscaping with native plants. Audubon’s Native Plant Database provides an easy way to look up plants native to your specific area.

This method is obviously more labor intensive than simply hanging a few feeders, especially when first getting started. Additionally, HOA regulations can sometimes be challenging to navigate. However, as someone who loves gardening as much as I love watching birds, I find it immensely rewarding. You don’t have to replace your entire yard or go war with your HOA to landscape with native plants. Just keep native plants in mind next time you need to fill a gap in your yard.

I just recently replaced an invasive Mimosa Tree sapling with a native alternative that attracks hummingbirds, Red Buckeye. Native plants have the added benefit of drawing birds that don’t visit feeders into you yard. Things like native oaks, willows, cherries, and birches will attract warblers and other insectivores. Native plants also support more than just birds. My Red Buckeye provides nuts for the squirrels and is a host plant to Saddled Prominent Moths.

I highly recommend this article from the Lewis Ginter Botanical Garden and any books by Doug Tallamy.

Oh, that’s interesting - I did not know that sunflower seeds are considered unhealthy for squirrels if that’s all they eat. I feed only black oil sunflower seeds and I certainly have several squirrels using my feeder off and on all day every day. The squirrels look and act perfectly healthy, but what do I know?

My yard is usually very messy with lots of seeds and berries in fall so I don’t start feeding until January. When I do put out food, I feed primarily black sunflower seeds and cardinal seed cakes precisely because they seem to be of less interest for squirrels. Anything with suet or peanuts will quickly attract them and get raided. There’s still plenty of natural food for the little furries - I haven’t had time to process black walnuts this year, so there’s a big pile for them to dig all around the yard for the winter.

don’t feed the ducks at the park, even if you are feeding them nutritionally appropriate food

Is it just because of higher habituation than other birds? At my usual birding spot people are feeding the waterfowl on a regular basis (unfortunately bread, sometimes by the bucket, despite the signs advising them not to), and the difference in behaviour towards humans is staggering. Especially for Fulica atra, they usually scream their lungs out if you get within 10m of them, at the spot where people feed them they’ll basically walk up to you.

Are there other factors at play?

I do put out suet, come to think of it, and the squirrels usually ignore that. There are oak trees here, although they didn’t have much of a crop this year, and lots of other native and non-native plants, animals, and fungi for them to eat as well.

Sunflower seeds are nutritionally appropriate for songbirds, but would be unhealthy for squirrels in large amounts.

Who feeds squirrels with seeds though? You give them nuts they already eat from wild shrubs. 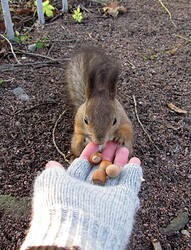 Are there other factors at play?

Who feeds squirrels with seeds though?

Not intentionally, just as a byproduct of feeding birds. I would avoid hand feeding squirrels. They habituate readily and can become quite aggressive.

Never heard about an aggressive red squirrel, they’re fed in every park, they sometimes get so used to humans to sit on them, but that’s kinda it.

Haha, yeah, the Eurasian red squirrels are cute and shy compared to the big and bold gray squirrel monsters in the US. I’ve heard people call them tree rats over here. I don’t know anyone who feeds them on purpose, they mostly just steal food that is not meant for them.