Has crape-myrtle any wildlife value?

These crape-myrtle (Lagerstroemia indica) trees seem like something out of this world, standing out as strange among the other trees with their unusual bark and unmissble, even garish flowers. I have not uploaded any observations of the crape-myrtles themselves, because they are all cultivated; I have seen no evidence of their becoming naturalized, or even reproducing on their own, despite thriving here. Nevertheless, I have been observing them carefully, looking for anything wild to observe which I can notate as being associated with crape-myrtle.

So far, I have found nothing except for a very occasional powdery mildew. No herbivorous insects, no galls, no pollinators, no seed-predating birds, nothing.

I’m not finding much online either. This blog article agrees about the powdery mildew, and suggests that the trees here are the pure species, not the hybrid; and this article only mentions two insect pests, the crape myrtle aphid and the glassy-winged sharpshooter. Glassy-winged sharpshooters are a quarantine pest in the California wine country, and the control measures seem to be working, because I have never seen one. I have not found any crape myrtle aphids, either.

Crape-myrtle must be native somewhere in the world. The specific epithet suggests South Asia. It may be that the lack of associated animals I’m finding is just because they are so exotic here that their ecological connections have been severed; perhaps in their native habitat they have more wildlife value. Has anyone observed wild crape-myrtles, who can speak as to their ecological relationships?

I do see Bombus and Apis on them as well as some butterflies, mostly skippers. Between the crepe myrtle aphids and bark scales they do take quite a beating which does not hurt my feels at all.

Besides bees, I’ve seen that small song birds show up to eagerly pick the seed heads. Also, when the trees got sappy (aphids?), I saw many ants and lady beetle larva, and lacewing eggs; my neighbor and I saw a jumping spider on the one between our homes. Crepe myrtle are not really a waste land.

Crape myrtle are landscaping plants. Smaller than Lagerstromemia speciosa and the other related species. It is known to flower well in sunny environment. I’ve noticed tropical mistletoe (Dendrophthoe pentandra) growing on it. This means that the sunbirds or other small birds might be present to sow the seeds on the plants. Local articles say honey bees visit the flowers. Cultivated trees may be frequently maintained. When grown in dry areas of the world, the associated wildlife may be different or lesser. The typical gardeners don’t want a semi-parasitic plant growing on the tree. The tree is probably suited to dry regions where not many plants can grow. Some other trees might be more resilient in desert-like conditions. So it adds variety , has some commercial value in the horticulture trade. Don’t know if the wood is worth anything. Carbon capture. Can try grow orchids on the fork of branches. However, its smooth bark means more watering needed otherwise the orchids won’t grow well.
Articles say finches feed on crape myrtle seeds. I’ve not observed that yet, probably there is no finch around here, except some munias species.

Yes, how can I forget bushtits! Everyone visits the aphid buffet.

I had a crepe myrtle in my old yard. California Scrub-jays nested in it every year. It had aphids, ants, booklice, bees, spiders, etc. in it. I once found an alligator lizard on it. Did it support as much biodiversity as the oak next to it? Not close. But any wildlife value? Certainly.

I swear I commented on this topic before but I can’t find it. I have been seeing them spread here in southeast Texas. When they are blooming they are very noticeable in forested areas as you drive by. They are starting to sprout up at a nature preserve I volunteer for. They are planted on private property across the street. Someone replied to my previous comment saying that newer varieties for sale are often sterile hybrids.

Also the seeds are popular with goldfinches.

They’re definitely able to spread; I cut down a few dozen a year in my yard that I guess come out as runners from the established ones that a previous homeowner planted

pretty enough trees for landscaping but they damn well take over if you let them. I have seen very small ants of some sort on them (tried to get pictures, too small), as well as aphids, and wasp have built nest on the established ones in my yard. I see honey bees use them but not our native bees.

or even reproducing on their own

I’ve seen them reproduce although they don’t seem to be very assertive about it. They come up in my yard regularly but not excessively. I moved a couple to my back yard but mostly I pull them from flower beds when young. Elsewhere in the yard, they get mowed over which does them in (unlike the volunteer oak trees, some of which survive the lawn mower the first few times). I’ve seen a few saplings in the greenbelts around Austin, TX, but they don’t seem to naturalize. I suspect they get shaded out in the moist places where the seeds might be deposited.

They’re considered invasive in many areas, but native birds in the US (and presumably elsewhere) do eat the seeds:

In Florida they’ve been documented as a pollen source for native and non-native bees:

There are many species all across South to East Asia (about 50 species), and in India one of the species is important for the Antheraea paphia moth, which is a local silk producing species.

In Vietnam they’re important habitat for a range of moths and butterflies, both as larvae and adults.

Some species of Crape-Myrtle, such as Lagerstroemia minuticarpa, are endangered (Critically Endangered in this case)

I have seen no evidence of their becoming naturalized, or even reproducing on their own, despite thriving here.

I also saw some crape myrtle volunteer, even prolifically, in unmowed areas. Maybe it depends on the variety?

Or your local climate. I’ve never seen a volunteer one in Southern California. I spend a greater than average amount of time removing volunteer trees so I am tempted to talk about them at length.

What an interesting thread — I live somewhere where they’re not native, and am constantly amazed how little they do to attract/sustain organisms, compared to surrounding species. Of course, I think it probably depends on what other options are nearby, as my area has many native oaks and wildflowers (where most birds, butterflies and other insects prefer to spend their time). I certainly don’t recommend planting them, over a native species.

I certainly don’t recommend planting them, over a native species.

Agree 100%. If the choice were limited to CM or common lilac (some people will always prefer the aesthetic of ornamental shrubs), I would recommend the myrtle based on my experience in a place neither are native.

I want to add that in New Mexico they stay fairly compact versus the giants I see in north and central Texas suburbs.

This may or may not be relevant or even helpful, but we’ve been buying trees from the forest service to plant/recover a cutover area.

My husband researched it and found that a lot of species do use these trees as folks above have noted, eg bees and other pollinators as well as birds for seeds and nesting. I frequently see warblers in the crepes, eating insects, so I know they are using them.

Except that honey bees are invasive too… 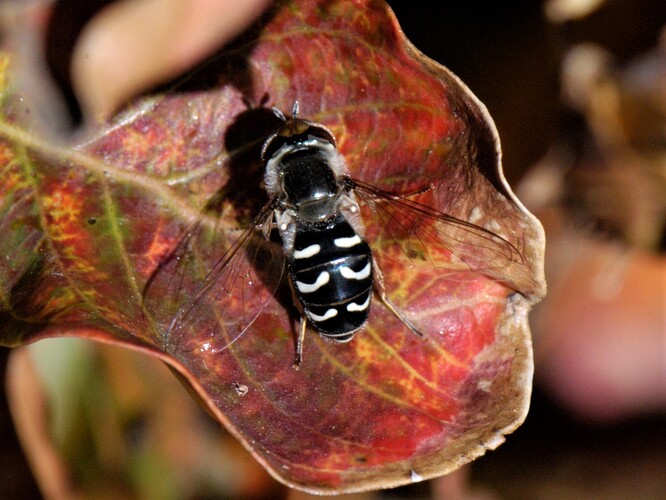