How best to handle escaped flora being marked as cultivated?

I noticed that my observations of “feral”/naturalized flowers had been flagged as captive/cultivated.
One of them was understandable as I didn’t show the surrounding environment or mention the odd location, but on the other one I had specifically put “Escaped cultivation” in the description and in the images you can clearly see it growing out of the sidewalk.

How best can I dissuade people from flaging them uncritically? Is there a project for maintaining feral plant observations like there is for animals?

I was also thinking of putting the following in the description, beginning in all caps so it’s more noticeable:
“DON’T FLAG AS CAPTIVE/CULTIVATED just because it is a common name.
If you happen to know for a fact that this plant was placed here by humans, please say so so I know you’re flag isn’t an arbitrary judgment based on species!”
Does that sound like a good/bad idea?

I will usually put something in the descriptor like “Volunteers from nearby flower bed growing from cracks in sidewalk. Not cultivated” or “Please do not mark captivated. Escaped plant”. They are still sometimes marked cultivated, but it has been pretty effective at keeping them verifiable, especially when I include context shots

Mark them as wild before somebody marks them as cultivated, check regularly if something got to cultivates, tag the one marked it and add a comment, add description and if it doesn’t work a general comment, tag more people who can help you with getting it back to wild. If you walk with somebody else you can ask them to mark what they saw as wild on your observations.

Always include a note for escaped plants. Show the environment if you can. If someone marks it as cultivated despite the note, add a comment to explain again and tag the reviewer in the comment who marked it cultivated.

I agree with others. As well, link to and quote the iNat guidelines regarding captive/cultivated and explain why they apply to your observation.

Pre-empt good intentions from identifiers with a note … (but not all caps) The ones who don’t / won’t read will UNsee the all caps too, no worries. Same difference as - this is for the bee not the flower - with a note up front, we can avoid tangled IDs.

Remember that iNat will automatically mark something as cultivated if >80% of local observations of that taxon are already marked as cultivated; so it may not be someone doing it. You can see who has marked it by hovering over the number next to the thumbs down in the DQA section. If it says ‘iNat’ has flagged it, then it has been done automatically.

I think @Marina_Gorbunova’s suggestion to pre-emptively mark such taxa as wild yourself is a good one.

@Marina_Gorbunova Marking the organism wild yourself when uploading is a really good hint.
I once had an issue where someone was of the opinion that an invasive plant observation should be marked as captive.
In the end, I marked it as wild as a contra vote and gave up arguing since I wanted to spend my time doing more happy things.

As others have said, pre-emptively giving it a “wild” vote is a good idea, as is leaving a note in the description saying something like “Escaped cultivation, please do not mark as captive”. This won’t stop it every time, but it’ll cut down on it somewhat. Often you’ll find that it’s just iNat’s automatic system marking it, though.

You can also see who has marked it captive, and leave a comment tagging them and asking them to unmark it - sometimes people just get into autopilot mode and mark things without looking carefully enough. I’ve been guilty of this myself.

If all else fails, you can also always tag me in a comment and I’ll be happy to drop in and cast a vote.
I also have a project for observations that are definitely wild but keep getting voting as captive: https://www.inaturalist.org/projects/ferals-waifs-and-strays-wild-observations-of-domesticated-species
You’re welcome to add observations to it, and I go through from time to time to check for captive status ones and add votes for wild.

EDIT: if anyone would like to assist with correcting these, here is an identify link for the ones in the project which are still voted “captive”: https://www.inaturalist.org/observations/identify?quality_grade=casual&verifiable=any&project_id=132006&captive=any&place_id=any

Many people seem to want to vote clearly escaped / feral animals as captive, even when the observer has stated they are not, so countervotes are appreciated.

Thank you all for the advice! I have changed the observations to put the most “wild” looking photos first and I’ll be putting a disclaimer in the description from now on.
I didn’t know Inat automatically flagged common cultivated species like that. That might’ve been the case, I’ll need to check. Seems a bit odd, since all escapees had to come from somewhere nearby, but I can imagine it’s a very helpful feature in high population areas.

The automatic feature is basically to save people time, effort and sanity :) Unmarked captive/cultivated obs are a real drain on people. The calculation is that the cost of the occasional escapee being wrongly voted captive is outweighed by saving identifiers the burden of adding captive/cultivated tags to 1000’s upon 1000’s of dogs, cats and potted marigolds.

adding captive/cultivated tags to 1000’s upon 1000’s of dogs, cats and potted marigolds.

Those are actual wild animals and shouldn’t be marked.

Remember to photograph the environment and, if possible, write a description of the obserrvation if you think that, given the depicted taxon, it could be conceivable that it is a cultivated individual.

Anyway, I think we could break a lance for those who care for flagging the observations of non-wild organisms. Unfortutanely there are so many of such observations that are left unmarked by the users, so, given the overabundance of observations to be flagged by other users, it is forgivable that sometimes certain unclear observations are wrongly marked.

Descriptions help so much. I’m checking common garden plants in New Mexico tonight and finding thousands of cultivated trees and shrubs under ‘Research Grade’. If the location looks “wild” on satellite, I’ll leave it alone, but I can’t possibly tell each case of whether it was planted or a garden volunteer. I hope the system will automatically vote against most of these in the future.

Thankfully, NM is so arid and cold enough in winter that most invasives don’t readily escape (tree of heaven and siberian elm are big exceptions), compared to Texas where anything can grow anywhere (Nandina and Ligustrum especially).

I hope you mark them all! Last thing I noticed were thousands of planted pears all over US being RG/needs ID, hope you deal with those too.

If anyone happens to look at observations in my area, this is what a lot of planted areas look like. Our landscaping is not aesthetic, but it’s easy to spot. 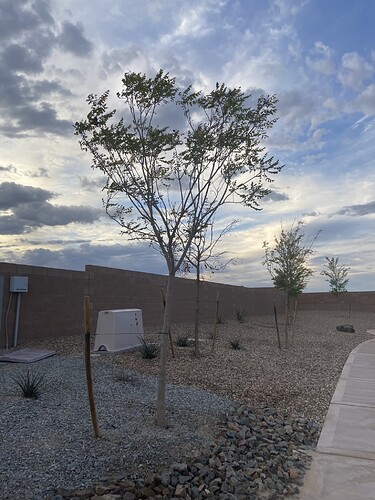 I will usually put something in the descriptor like “Volunteers from nearby flower bed growing from cracks in sidewalk. Not cultivated”

No, it isn’t, self-seeded plant, not being attended as part of flower bed, it’s wild.

I think it makes more sense—both in terms of being informative about ecology and biodiversity and in terms of using pragmatically distinguishable categories—to consider the plant “cultivated” if it was brought to a site deliberately and is still in the same ecological context.

If you plant something in a flower bed and it moves a few feet into another part of your yard, that’s just not a meaningful distinction to me. It’s still a plant put there deliberately and still in a heavily managed / tended, artifical landscape.

Rhizomatous plants are totally unworkable with an “I didn’t plant this exact individual” definition, too, since “individual” is not well-defined. If you look at a lawn of Cynodon dactylon, which individuals in the turf were planted? I don’t think that question is answerable nor has an interesting answer. And Cynodon dactylon will make it into cracks in the sidewalk or the road!

I also used to spend a lot of time in the greenhouses at Indiana University, and things like Psilotum and Ophioglossum would pop up in pots all over the place where they hadn’t been placed intentionally. Are these wild, now? By the “self-seeded” definition, yes (with a caveat that they don’t have seeds, but I don’t suppose that’s relevant). By common sense, surely not.