How to identify biodiversity hotspots on iNat?

“Which geographical area has the highest biodiversity of Cactaceae” - this is a question I have and I was hoping I can use iNaturalist to find the answer. But more generally, I’d be interested in ways to identify biodiversity hotspots for any given taxon (above species I guess).

The closest I could get is to see the observation map for the taxon, and it sort of functions as a heat map. However, it’s ruled by the number of observations, and it doesn’t necessarily map to the number of species within the area.

Any pointer would be helpful.

Map shows you number of species in a tab, so use polygons to make searches for specific areas or use filters to search for countries or lower regions. Maybe there’s an easier way to search for that info in GBIF? They have more options for map.

Geographical area of what size? A quick look at the data shows Mexico is the most diverse country for family Cactaceae and likely the same for Agaves and allies in Asparagaceae. You could check each state of Mexico to narrow it down then try different size circles after that.

While that question seems similar to the one you asked it will actually yield rather different results from the actual answer you’re looking for. We know that places like the Amazon rainforest have huge amounts of biodiversity, but places like the San Francisco Bay Area, which have a huge number of observations and only a moderate amount of biodiversity will show up with far more biodiversity observed on iNaturalist than a similarly sized area of the Amazon.

There is a good chance that the area with the highest amount of biodiversity is a fairly rural area, which will get fairly few observations and identifications, which would mean that the full extent of the biodiversity in that area wouldn’t show up on a search.

I agree in part. For overall biodiversity, iNat data is certainly far from perfect. However, conspicuous flowering plants like cactus are very well documented and identified in the areas they grow.

Of course, a search on https://swbiodiversity.org/seinet/ is probably safer.

For example, a map search for Cactaceae centered on 22.19262 -101.41888 within 200 km yields 178 species while an iNat search in the same spot yields 245. Maybe the difference is unmarked cultivated plants or the iNat data is more thorough than herbiara.

I’m an author on a paper that gives you the answer and more! It’s “High proportion of cactus species threatened with extinction” because in order to assess the threat status, you need to know the range of the species. Mexico is definitely the country with the highest diverstiy.

places like the San Francisco Bay Area, which have a huge number of observations and only a moderate amount of biodiversity will show up with far more biodiversity observed on iNaturalist than a similarly sized area of the Amazon

I remember hearing that in some countries, the highest density of bird species sightings are within walking distance of a pub ;)

Possibly an answer to @stekkelpak is using a taxa map of the species being sought and hope to see some kind of over lap. The first image here is one of a map I queried a while ago for another question that was about the best place to find the most wild Felines in South America - someone has put a lot of time into atlas-ing this giving ranges. 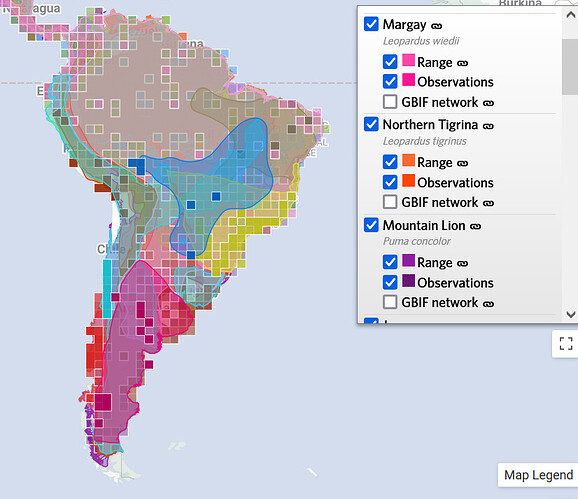 I queried a map for the 10 most observed cacti in California and unfortunately it does not produce ranges but does show observations in differing coloured pins per species that can be turned on and off resulting in the following: 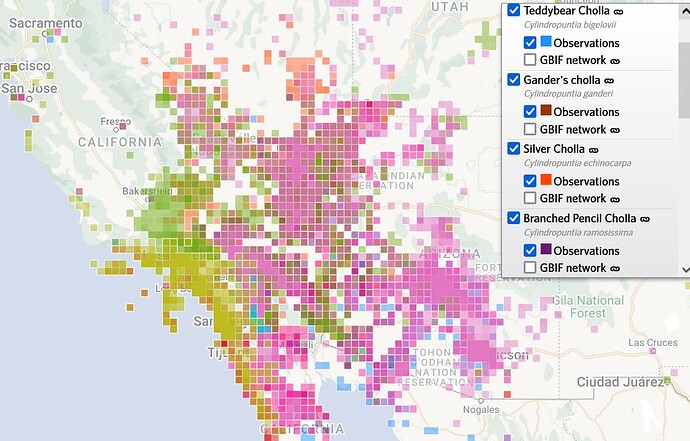 Thank you Bob, I learned a lot from your reply! How did you create the second map btw? Simply adding the taxon IDs to the URL, or on the iNat UI somewhere?

Yep, I could use a manual iterative process where I first narrow down the states (based on where I see the most Cactacea observations within Mexico), then query each of those states separately, then comparing the number of species.

I always bookmark interesting things for future use.

I started by opening up Explore with and looked for Cacti in California and opened the species view, then using Ctrl select (PC), I opened in different tabs the top 10 most observed cacti. Each tab has a unique URL such as https://www.inaturalist.org/taxa/57872-Opuntia-basilaris. The number 57872 can be copied in for said taxon. Just add a coma after each taxon number.