[Note: Cassi suggested I repost this request here.]
When I view a set of my Observations in Map view, particularly when the set is spread out widely east-west, the side window showing the list/thumbnails of observations blocks a significant portion of the eastern part of the map. See, for instance,
https://www.inaturalist.org/observations?locale=en&preferred_place_id=1&taxon_id=205197&user_id=gcwarbler&verifiable=any
and the attached screen capture.
To see the full breadth of observations, I have to either manually move the map or change the enlargement to bring those observations hidden under that side window into view.
Please consider resizing the frames of these two elements so that they are non-overlapping, e.g. with the map taking up perhaps 3/4 of the left part of the frame and the observation list contiguous to the right.
Thanks for considering this. 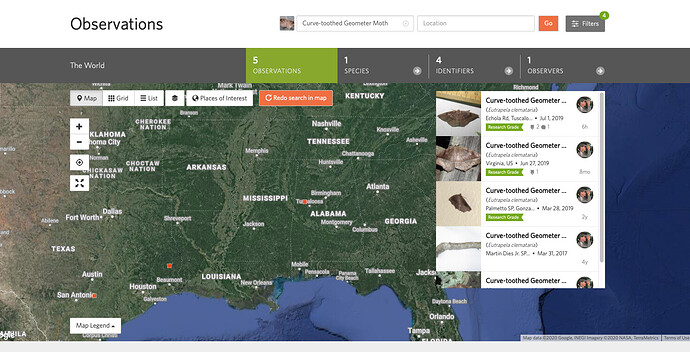 Pagination instead of infinite scrolling.

Totally agree. When I want to get to the bottom of a page, I want to get there in one mouse or scroll-bar motion. IMHO, infinite scrolling ought to be banned from the internet! Not that I have a strong opinion on this…

And NO avatars for observations or observers.

The avatar is a courtesy to the rest of us, a visual reminder of who you are.

iNaturalist is self described as a social network. I don’t think displaying an avatar is childish or unprofessional in the least.

In grid view the small avatar takes up far less space than a username in text would (although at the loss of some visual information).

And it’s the observation photos and multiple lines of text that currently take up most of the space in list view.

I hope I’m not asking a repeat question, but I would like to under Explore, be able to click species, and have all the species sorted alphabetically, or better yet, be able to sort by Genus. Currently, the results are by the most observations first.

Let me give an example, I’m working on a verification of a list of species, so the search criteria was: taxon - Asteraceae, place - California, USA. The results appear, and I then click the header at the top named species. Now a nice list of all the species observed in California appears, but I would love to sort the over 1200 species names into something better, like alphabetically.

I don’t remember if it was brought up here, definitely the need was discussed somewhere, but it would be cool to be able to have an ability turn on a display of a second in a row species photo as a small icon within big one (or the species would take 2 spots of the row instead of one), so when you’d be looking in explore at species list for e.g. moths you’d see pictures of their caterpillars (should be added as 2nd pic) in that icon.

It used to be able to be done with the checklists, but my understanding is they are buggy and no longer supported. You could try it and see if it is an accurate representation for a smallish area, before using it on a larger one. 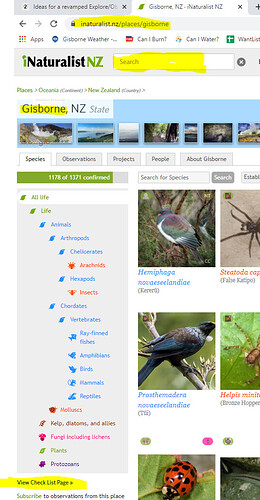 notice the url showing that we are looking at “places”, I used the top left search to find Gisborne. Also that it lists taxa seen there in frequency order, same as for the species tab on the explore page. 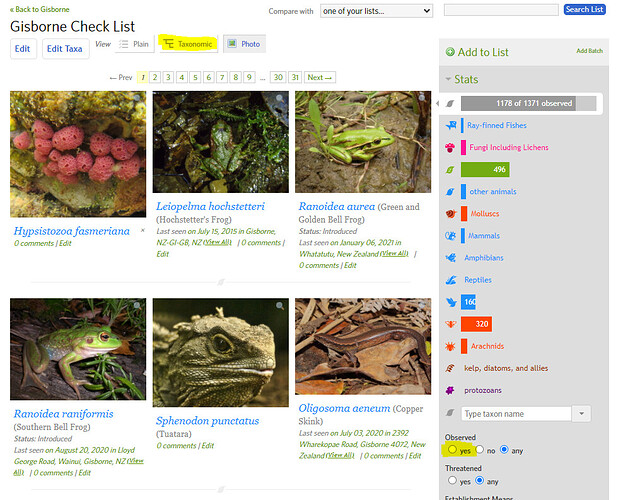 This could potentially show taxa that were manually added to the list but not seen, so if desired just check the “observed” option at right, and choose the taxonomic view instead of the photo view 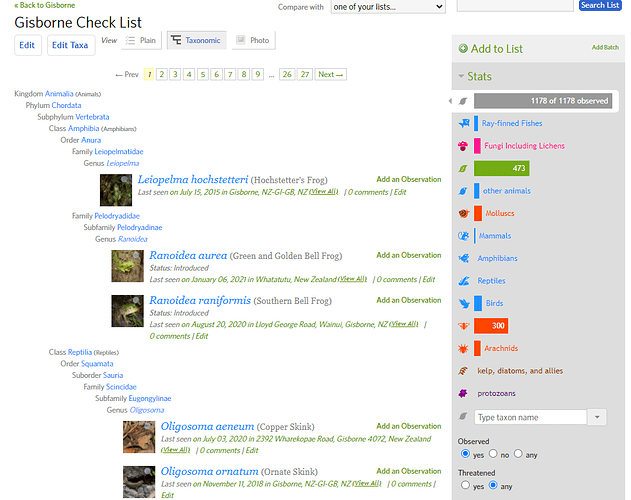 A simpler view, one that doesn’t show every taxon level but still sorts by them, is the plain view. Have a play and see if it works for you.

Two suggestions. #1 seems feasible but large, #2 is way too specific and probably no one but me would use it, but I’ll throw it out there anyway.

1. Add a “Projects” tab. Similar to the “Observations” and “Species” tabs, it could include all projects within your search area (probably limited to 500, like the others). They could be ranked by observations and species, separately or together, although separately would be preferable. Clicking the “x observations” link for a project could automatically populate the project search bar with the project ID, similar to how clicking that link for a species fills in the species search. The projects would be subject to any and all search parameters you impose, including specific species, Wild / Captive and certain users’ observations.

2. Within the “Your Observations” search, species view, use your own photos as taxon photos.
I told you this was niche. I’ve been thinking about it for a while, but didn’t post because it seemed like a waste of time. Then I saw this topic, which is the exact same request but for your life list (where it makes much more sense). However, that wasn’t good enough for me, because I don’t like iNaturalist’s life lists. They’re confusingly organized and just don’t make sense to me. All I want is a nice, simple display of your species observed, filterable, easy to understand. So I use the “Your Observations” filter on Explore in place of my life list. I’m looking for exactly the same functionality as described in the linked feature request, but for that page.

Oh, one more suggestion: Make filter settings “sticky”. I like to filter my observations by Date Observed, not Date Added, and it bothers me that I have to reset that every single time. This could also be useful in other situations, and I can see no way in which it would be worse than the current setup.

It looks like this is the place to suggest a change for the Search filters on the Explore page?

I also have some search preferences that I would like to be preserved by default, but I did find a work-around: Because the search settings are preserved in the URL, you can bookmark your search results for quick future reference. For example I created a bookmark to show only observations that “Need ID” for the City Nature Challenge project in my area, sorted by oldest first (since most people are looking at the newest).

The benefit of using bookmarks is that you can have a bunch of different searches at the ready, too! (So at least for me, having the search parameters in the URL is actually more helpful than having the last search saved by default.)

Thanks for the suggestion. I’ve heard people mention bookmarking before, but the problem is I don’t actually know how to do it. Do you think you could give me a short description?

This is not the case. Rather, they will not achieve research grade if the community ID is different from their ID. Frequently, these users will change their IDs based on what the community suggests, so adding IDs is definitely helpful. You may also be interested in this feature request:
https://forum.inaturalist.org/t/search-by-observation-taxon-or-community-taxon/3620

only research-grade IDs count towards the project

This is also not true. Needs ID also counts. 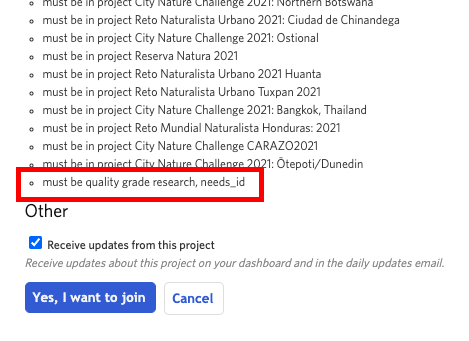 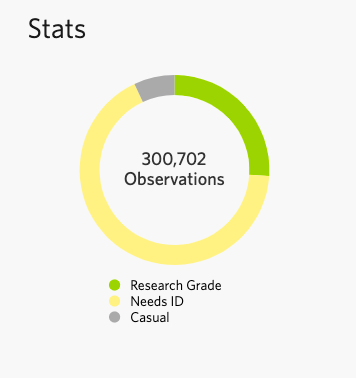 (Not sure why there’s casual observations though.)

This is also not true. Needs ID also counts.

the City Nature Challenge project in my area

The San Diego County project excludes casual obs - regional organizers are given the option to choose whether or not to include them: https://www.inaturalist.org/projects/city-nature-challenge-2021-san-diego-county?tab=about

Not sure why the Join project page for the main CNC project excludes casual, but it’s had other inaccurate/missing information before too (prob vestigial/unupdated from when Collection and Umbrella projects were added to the site).

@miramatt I think this filter would be way more useful on Identify than on Explore actually!

I would appreciate it a lot.

When a user hovers over an image in grid view or list view, the contrast is lowered or something; the image becomes very washed-out. Clearly, the ostensible purpose of this visual feedback is to let the user know which image he’s hovering over. But it also clearly detracts from the usefulness of the image, especially in grid view, because when the image is all washed-out, it’s hard for the user to see the characteristics of the organism. So you’re basically forcing the user to either click the image or move the cursor away from it if he wants to see a clear image. If you really have to give the user some visual feedback (which I’m really not sure is necessary anyway), can you please make it something that doesn’t interfere with the image in any way?

Grid view is not done to iding imo, so you need to click on image anyway.