whether it should be opt in or opt out by default

Can it be a question asked on signup? So that new iNatters know it is a possibility.

Also, please remember that this is a place for constructive discussions. If you feel the urge to say the same thing that has been said by several others, just use the like button rather than making a new comment.

Can it be a question asked on signup? So that new iNatters know it is a possibility.

This is currently all hypothetical, so I suppose it’s possible. But I personally don’t think it should be, there’s already enough to get a across. If implemented, might be best if it’s an opt-out - a user sees the warning graphic, clicks on it, sees a pop-up and makes a choice.

Moths should always be at level “9”

I thought he was referring to me! Which he probably was. Your posts were not off topic at all.

Good discussion. I have sometimes used a dummy/warning main image for roadkill observations (examples 1, 2, 3), and have wondered if it might affect the machine-learning process (although I expect one image gets drowned out pretty quickly). I would probably opt out of programmatic blurring/replacement of dead animal photos if given the choice, but I can certainly see both sides.

Constructively speaking, this is the biggest underlying problem with any of the efforts suggested in this thread- the limitation of the amount of existing annotation data used to enact any of these filtering strategies. The manual addition of an annotation to each record is the highest hurdle.

So, how do we develop a focused effort to find and label the dead (or, at least “objectionally dead”) organism records? In the past, I have tried to skim through un-annotated vertebrates (likely the biggest source of squeamishness for a lot of people), but my hit rate was so low in that context that it got a little too boring to continue. Does anyone have suggestions for getting to those in a little better way? (edit: I spawned a wiki for those.)

Meanwhile (warning @mamestraconfigurata , moth-related content ;) ), as I have been annotating Lepidoptera life stages, I have realized that seeing specimens with pins through them (related topic) gives me a negative reaction. I’ve recently added marking them “dead” to my workflow and it’s very satisfying to know I can “make them go away” if I want to filter them out later.

It’s not a specific recommendation for others to do this (high-volume annotation may be an unusual activity), but I’m bringing it up to illustrate that if anyone is inclined that way, there is a “payoff” to adding =dead to one’s annotation workflow. Even if you are not bothered, you will be helping some other user(s).

Thank you - I closed my eyes when I read this!!

@lotteryd, I would not mark pinned specimens as dead because usually the observation should come along with the date (and time) of capture, reflecting the moment when the specimen was collected at which point it was alive. Marking them as dead suggests that the date information should not be used for studying things such as phenology for example. If the date (or the location) does not reflect the moment of collection, well, that is another story and the observation should be made casual in some way. For an observation that is not casual, I understand “dead” as meaning dead at the time of the observation/collection.

I totally understand your concern for having the correct metadata for specimens! From prior discussions of ways people have proposed to avoid seeing death at iNat, I would still argue in favor of the =Dead annotation on a collection item’s photo set, as long as that dead state is what the photos in the record actually show.

To importantly preserve the concept of having collected the specimen while alive, maybe an Observation Field could carry that datum? Something appropriate might even already exist in the large list of fields. Might any entomologists be able to give advice on how best to do a separate but suitable annotation via observation field?

I realize that my opinion here is in direct contradiction to tiwane’s earlier advice in a prior thread, but then again higher up in the present thread, he describes a shift in thinking ( @tiwane if any additional ontopic remarks).

Seems to me that insects with pins through them are dead and probably were soon after capture. Although I wouldn’t bother, it seems to me that there’s nothing wrong with marking them dead.

If the consensus were to be that there would be something wrong with it, and collected specimens should be annotated =Alive if alive at capture (though not at photograph stage), then I would argue for using an Observation Field like “killed by” =humans (where the collector is human).

It would be harder for users to know to filter that out, but it could be a workaround for the squeamish.

I think this is a great question, and I don’t really have an answer. I would think that there wouldn’t be any defined responsibility, just as there isn’t a responsibility to take the time to ID anything on iNat. I think the idea is that it would be a community effort, and any tagging or annotating of observations would constitute progress. I think the more objectionable an observation is, the more likely it would get tagged, analogous to how flagging works with inappropriate content.

What you should think of is an object of observation have to be on each photo, we’re not iding other observations if they don’t fit the criteria, a picture without any organisms at all shouldn’t be in observation, try modifying existing photo instead.

I feel similarly with pinned insects - the only information we have to go on is what the photo shows. The insect may have been alive when it was captured, but if it is pinned (and spread) it is dead. I have comment about degrees of death, but not for here!

Like a stone effigy of a knight on a sarcophagus, a pinned insect is clearly dead on the photo. Those pictures stand out among the many which are clearly alive (or even blurred in movement)

I would also like to add that I have yet to come across a photo that is wildly ‘gross’. I have yet to see a corpse with it’s guts ripped out and maggots, etc. Dead things, yes - but not ripped up dead things. FWIW

Annotations should be added about interaction with insects, so pinned ones were alive when a person met them and should be annotated as alive. But pinned insects are far from being disturbing, they’re the most whole bodies imaginable, while some squished but alive ones give more unpleasant feelings. It opens a question that really annotating doesn’t solve a problem of what can make a person feel bad.

pinned insects are far from being disturbing

I know that intellectually, but I have been surprised that I have a visceral negative reaction (a mental “wince”) when I see these. In contrast, other dead insects in photos don’t bother me much. Brains are weird!

I also have a ‘mental wince’ when I see pinned insects. It just seems these days that non-human life is so endangered that killing one to identify it seems unnecessary.

Devil’s in the details, though, as to how and where to implement it and whether it should be opt in or opt out by default.

If some type of filter were to be enacted through an opt-in would make more sense, as part of new users’ introduction (maybe with examples/preferences like dead non-vertebrates, non-herps OK, or check-boxes for what’s acceptable dead).

Established users could have an option to opt-in as a new feature (how that gets communicated is another issue). Maybe a sample pixelated view of a mammal photo tagged as dead, with a roll-over option to view/opt-out of the feature? There could even be a third option where people decide how they’re feeling day-to-day (let me decide each day) or an “I’m eating lunch” option?

At the same time, I know everyone’s different, so it would be interesting to see how this could be implemented in a way that respected others’ personal preferences, while allowing for the option to take a dip in the shallow-end, so to speak, and desensitize in the interest of pushing personal boundaries, and/or learning about the ‘other’ side of life.

In my view, this is harmful for many reasons, one of which would be decreasing the outreach/educational value of iNaturalist to the public, as a policy, such as wildlife crossings under highways and reduced wildlife corridor speeds, for example, cost money and political capital to implement, and without people being made aware of the issue, it’s less likely to have as strong a public backing it might otherwise have.

As an example, the Newt Roadkill projects [1] [2] have been effectively and systematically documenting thousands of newt kills, resulting in extensive local media coverage [1] [2] [3]. As a project, they’ve been advocating for changes to infrastructure which are currently being weighed, without this project, there probably wouldn’t be a review since the process is largely political in nature.

The same is true for more charismatic species like Mountain Lions as well, which have had a 58% decline in mountain lion roadkill over the pandemic period due to reduced traffic, these are avoidable deaths that will return when we get back to ‘normal’ which require public awareness at some level, which is greatly dulled by this proposal. 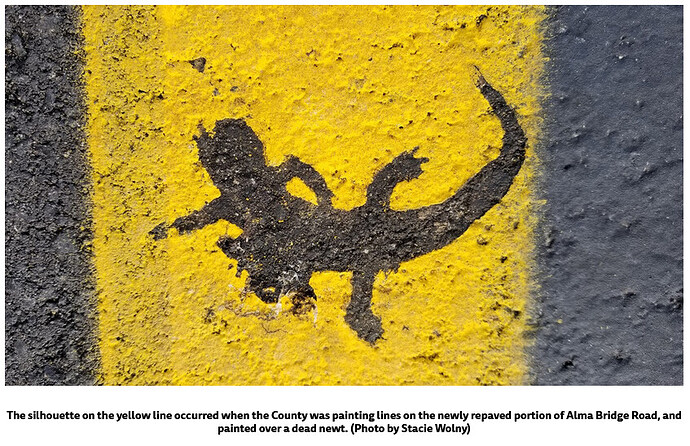