Is potential for hybridization related to taxonomic rank?

Agreed that intergeneric hybridization varies widely. Also, genera aren’t “real” biological phenomena - just taxonomic groupings made by humans. Some based on reproductive traits, some not. In birds, species have been much more “genericized” than in other groups because there is so much interest/research that has led to splitting whereas in other taxonomic groups, genera are often much larger. So I would be wary about making inferences about hybridization based on taxonomy.

I mean… yes, but at least we have rules for what species fall under which taxonomic rank. Do we always follow that rule, now that’s the question. For example, I’ve heard of intergeneric hybrids, mostly in birds, but I don’t think there’s any family hybrids, simply because they don’t exist. So that’s a “rule” we can apply to the family rank. If two species can produce a variable offspring with each other, then they are by definition, a part of the same family (which is why the Yellow-breasted Chat is a blackbird and that taxonomy needs to be revised). I find it harder to define rules for genera but the rule for it is pretty loosely “a collection of organisms with similar traits.” That leaves us with a lot of self interpretation. Though I must say, at least we aren’t like paleotologists.

I don’t think systematists are thinking about families in that context. The ability to interbreed is just a single phenomenon that can be affected by a suite of phenotypic characteristics. It ultimately is a strange and inconsistent proxy for evolutionary relatedness.

For example, it’s possible that changes to just a handful of genes could produce a reproductive barrier between two closely related sister species, while another pair of distantly related taxa with 100s of times more genetic differences could still retain the ability to interbreed through sheer chance.

The existence of the presumed Yellow-breasted Chat x Icterus hybrid is fascinating, but that single data point alone probably shouldn’t negate the validity of Icteriidae.

Genera are real and taxonomic groupings made by humans. :-)

I’m with @cthawley on this one. Genera (and taxonomic categories generally) are conventions imposed on observed phenomena, not phenomena as such. Every effort to come up with universally consistent definitions breaks down when confronted with the staggering variety of living things.

But why should Icteriidae be the exception? There has never been a hybrid recorded two families ever, and when you think about, the idea of interfamily hybrids is completely ludicrous. A Song Sparrow x Yellow Warbler is never going to happen. California Scrub-Jay x Cassin’s Vireo? Blue-footed Booby x Neotropic Cormorant?

Besides, if you read the AOS proposal to place Yellow-breasted Chats in Icteriidae, even the authors admitted to the fact that the chats were basal to blackbirds, confirmed by phylogenetics. Personally, I think the change that needs to occur is to make Icteriidae → Icteriinae.

I distinguish in this context between the rank “genus” and taxa at that rank.

Both are arbitrary, although in different ways.

at least we have rules for what species fall under which taxonomic rank. Do we always follow that rule, now that’s the question. For example, I’ve heard of intergeneric hybrids

I would argue that we don’t really have rules at all, we have proposals for rules, all of which fail in different ways when they are applied in different groups. The existence of intergeneric hybrids is just one small example, but it’s an important example.

We certainly do have a rule for what rank species fall under. The rank is called “species”. :-)

There has never been a hybrid recorded two families ever, and when you think about, the idea of interfamily hybrids is completely ludicrous.

Always gotta be careful using the word never when it comes to biology ;)

Off the top of my head, Numididae x Phasianidae has been documented many times. I’d be surprised if there isn’t another bird example, and other non-avian vertebrate examples are out there.

i want to see a red tailed hawk-chickadee hybrid. and yeah i know they aren’t in the same family

I believe there are some interfamily hybrids in catfish/carp but not my field. There’s also some in algae maybe?

This comic shows some hybrids I’d like to see: 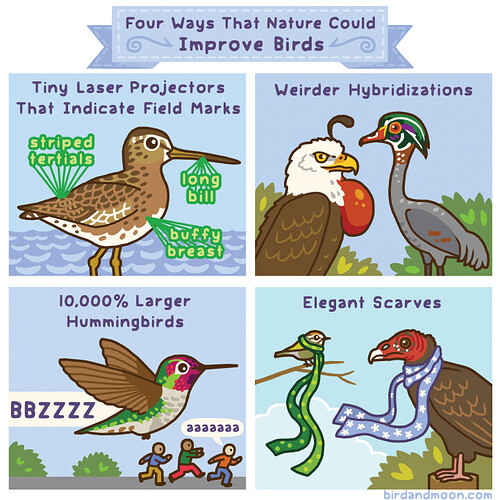 I’m pretty sure it’s easier in plants, just multiply genome and you’re ok with any hybrid!

There’s an inter-order hybrid between a beluga and a narwhal.

They’re from the same family.

Sorry. I confused them with something else probably

I have high suspicions on that. Literally everything about catfish and carp behaviorally would keep them apart. The first problem is catfish being bottom feeders. Breeding behavior involves different patches of water.

I can bring you larger hummers.
Our sunbirds. The same ecological niche - but because ours are bigger they perch while feeding.

Babiana ringens has evolved a sunbird perch (only a non-birder could call it a rat tail)
https://www.inaturalist.org/taxa/119325-Babiana-ringens

If you do run into cases of inter-familial hybridization, then perhaps the taxonomy of the organisms involved needs to be revisited. There is the reality of biological diversity and then there is our imperfect system for organizing and naming it.