Where is the carbon footprint estimate of the iNaturalist platform? These days we should all be aware of the collective cost of the data we generate, so I suppose it’s open information somewhere on the website. Where is it? Thanks!

@akilee You might want to check out this forum post on this topic from 2 years ago. It has some resources that may answer some of your questions… I’m sure a simple google (how I found this link) will turn up additional resources.
https://forum.inaturalist.org/t/carbon-footprint-of-inaturalist/11126

Thanks for posting that link, @mycowise. I’m not sure I have much more to add to @kueda’s reply there.

The original post is a legitimate question. If you have an argument as to why it shouldn’t be a concern, please make one.

From the Forum Guidelines:

Help us make this a great place for discussion by always working to improve the discussion in some way, however small. If you are not sure your post adds to the conversation, think over what you want to say and try again later.

I think it’s really cool to be conscious of your personal carbon footprint, and as much as I agree with leading by example… https://www.eia.gov/todayinenergy/detail.php?id=16271
Not that I’d like to perscribe to a whataboutism and a defeatist mentality, however I promise whatever carbon footprint Inat has it’s negligible.

Quite. It’s about priorities.

I’ve never met anyone who can honestly feel guilty about everything equally all at once.

Nor do I want to.

with all due respect, my response was to the suggestion, that I quoted.

I didn’t question the legitimacy of the OP or the content of the post, but the presumptive suggestion that,

I suspect at least 15 individuals, including admins, share a similar opinion on this matter.

These days we should all be aware of the collective cost of the data we generate, so I suppose it’s open information somewhere on the website. Where is it? Thanks!

Beyond carbon, we should consider the possibility to be concerned by other, and let me define them much more harmful, pollutant such as cobalt, lithium and rare earth metals. They are inside many devices we use every day.

I stand with you @akilee. I am concerned about servers and their power usage (living with loadshedding makes that a visible and practical issue). To store data which includes the NOT useful part. Someone dipped in briefly, added a few blurry photos, which didn’t get IDs. And that will be meticulously stored till iNat implodes.
Much more comfortable for the First World to say - it doesn’t matter.

I think it’s ridiculous to even consider it our responsibility to reduce or even be conscientious of our individual carbon emissions.

@dianastuder you rule, I respect you immensely.
this is in no way meant to be a critical, aggressive, or pedantic rambling response to your contributions to this discussion.

I don’t think you personally are wrong at all, but I have this and conversations like this regularly and I think the converse should be discussed.

Folks in places like the UK, USA and Germany aren’t exactly immune from the effects of climate change, not even a little.

Much more comfortable for the First World to say - it doesn’t matter.

By First World, do you mean the ultra high net worth individuals and/or the leaders of the “First World”? because all of the struggling, hardworking people of these nations would rather enjoy seeing our lands not dry up from droughts or continue to be washed away by extreme flooding.

specifically people like the founder of Amazon, and AWS, the cloud platform utilized by iNaturalist. A man who felt compelled to generate the carbon footprint equivalent to nearly a billion people in global south, for masturbatory 11-minute suborbital journey.

But honestly, the 30-70 tons of equivalent carbon emissions required to refine and produce the fuel for required for one of these flights is a paltry sum compared what folks like David Geffen produce to run his many yachts.

When hundreds of billionaires around the world continue to emit tens of thousands of tons of CO2 emissions, so they can charter private flights between residences that largely sit empty with green lawns and full pools,while owning and operating megayachts worth more than the GDP of some nations,

I think it’s completely unfair to put the burden (or guilt) of mitigating climate change upon individuals in “globally north” nations.

I also think it’s quite unfair to judge or criticize regular folks who live lifestyles reliant on fossil fuels, of any economic status in the “first world”.
These are people with families who are combating crushing inflation, astronomically high food prices, stagnating wages, and crippling debt, who have intense anxiety and doubt the future, and stability of the governments that control where they live.

Has anyone ever considered what the equivalent carbon footprint of sending the amount of researchers and photographers necessary to generate the amount of distribution data alone that has been generated on iNaturalist by citizen scientists, worldwide?

I think we should all be quite proud of the tremendous wealth of information that has been generated and maintained through the iNaturalist network. It’s far from complete or perfect now, but imagine, in 10 or 15 years the cumulative amount of information transmitted to a central database by the cloud alone.

Compare the cost of the location/distribution data on compiled by iNaturalist alone, to the CO2 emissions that would generated from what would require hundreds of thousand of flights to bring hundreds of thousands, of individual researchers to and from locations across the globe, spending hours, days and years working in full university facilities deciphering, processing, discussing, debating and years later, ultimately publishing traditional academic research conducted by western university systems.

Below:
Carbon emissions of the world’s billionares, by equivalant of tons of CO2 emitted. 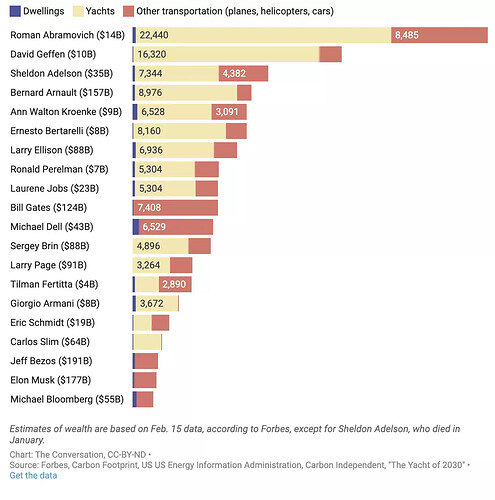 And oligarch’s yacht heading this way too
https://www.timeslive.co.za/news/south-africa/2022-10-24-cape-town-mayor-calls-for-russian-superyacht-to-be-denied-permission-to-dock/

We are way down South, but still not far enough away!