Local endemics not showing up in suggested species IDs

Just wanted to make an observation. I have repeatedly found that local endemics don’t show up as suggested species for IDs - the algorithm not only seems to prioritize widespread species, which is understandable, but the local endemics with relatively few observations don’t seem to show up at all. For example, I recently saw some of Epilobium siskiyouense, but the ID algorithm always suggested Epilobium obcordatum and no other Epilobium (see https://www.inaturalist.org/observations/130945152). This problem seems to be worse in the time since the “show only nearby suggestions” switch was added.

Not all taxa are in cv, you can check at their taxon page, last version was different, but taxa with less than 100 photos are likely not in cv.

If you would like to see plants (or anything else) that currently have less than 100 observations show up as suggested species, make enough quality observations so that there will be well over 100 next time they create a new CV model. Then there will be enough observations to include it in the model. You are the solution to this problem.

You can also tweak to Visually Similar, then check the maps for distribution.

In Identify portal or any individual observation, you can click compare then look at “Observations” or “Checklist” as the source to see all species observed in a certain place, including ones with zero iNat observations if that information is available. 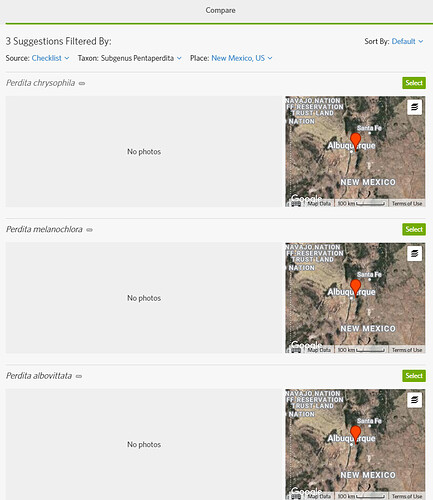 The CV is trained only on species for which there are at least 100 observations in iNaturalist. Therefore, post lots of observations of your local endemics so they can be included in the next round of training.

In the mean time, be aware of this important issue when you’re trying to identify things.

Thanks @Marina_Gorbubnova and @sedgequeen among others for pointing out the limitation of the cv model to taxa with more than 100 observations - I did not realize that! Now that I know I can work with this - but it does require one to get on the web, rather than use the app, to see other suggested taxa in the area. Thanks again all!

And one further strategy that seems obvious now that I know the limits of cv, but somehow I hadn’t thought of it - I can search the genus using the “explore” tab on the app and see all members of the genus in the area. I mostly use the app, not the web interface, so that matters to me.