Your collective wisdom is requested, folks: I am trying to understand the cause of 2021’s low (and erratic) dragonfly and damselfly numbers in Northwestern Ontario, Canada. In an average year, I see 32 species of odes and finish with about 128 individual records. My species tally for the year is bang on normal - 32 species - but I only have 82 individual records with about a month to go in the season.

I can tell already that numbers were actually above average in the early summer. I recorded new annual highs for Dot-tailed Whiteface (Leucorrhinia intacta) and Hudsonian Whiteface (Leucorrhinia hudsonica), which generally start appearing here in late May. However, since then, numbers have collapsed. I only recorded 17 observations for all of July - and that should be prime time. The most common sighting in my personal list should be the Meadowhawks (Sympetrum species). These later-flying species- which can often only be ID’d to taxa level - close out our season each year. I had 52 Sympetrum sightings for 2020…and as of today I have only five for 2021.

The reality may be a combination of all three factors. And it’s not just dragonflies that are affected. Butterfly numbers were also at record highs in late spring, levelled off to normal mid-summer, and have been below average since then.

Are your numbers also reflected in the whole local community, or just you?

@trh_blue Thank you for your comment. The challenge is, the area I live in (the western Rainy River District) is so remote and receives so little coverage that - for all of 2021 - there are only 16 odonata records that aren’t mine. There are more for Northwestern Ontario as a whole (about 380 including mine), but that territory is larger than California and crosses eight different eco-regions.

So, it becomes very difficult to detect any pattern from only 16 records and/or from eight different eco-regions, seven of which are fundamentally different from Rainy River. My wondering is more along the lines of, does my speculation sound reasonable? And, are other areas experiencing severe drought this year also seeing low/erratic ode numbers?

This was my question too…for a single observer, the difference between an average of 128 observations and 82 observations for 32 different species doesn’t seem that striking…that means that (assuming an equal distribution of observations across all species, which I’m sure is not the case), you are only observing each species an average of 4 times each per season vs 2.6 times this season …those are hardly the numbers required to make population level inferences on abundance.

It would be interesting though if other local observers are seeing the same thing…in that case, it may point to something, but a far more robust survey and sampling method would need to be employed.

Just to be clear, I’m not knocking your observations at all, just saying that it is hard to make any conclusions about the health of a population based on those numbers from a single observer.

Sorry, I’m reading without my glasses here, you obviously do record much higher numbers of obs for some species than others. I still think the overall numbers of observations in “good years” vs this year are too low to make any conclusions though.

@polylepis Thank you for both your comments. Very valid points: the amount of data involved is too small to draw statistically-significant population-level conclusions. My hope is, this year’s observed numbers are a fluke and not a trend. The little Meadowhawks should be our constant companions this time of year, and their almost complete absence from my area is really unsettling.

Observation bias is probably a factor, as others have stated, but I can agree with the environmental conditions. Also, could shifting successional habitats be making a difference? Sedimentation, seepages drying up or growing larger, beaver ponds being created or destroyed can totally change the ode biodiversity where I explore in habitat somewhat similar to Ontario in the high-elevation Blue Ridge.

@cadecampbell Thank you for your comment. I hadn’t made that connection to shifting successional habitats and that might be a factor. For the last 3+ years, there’s been a concerted (…some would say, excessive) effort to install tile drainage in the agricultural portion of the Rainy River District. While my own property has not been directly affected, I can imagine that the tile drains and the associated disruption - combined with the severe drought - may have damaged or eliminated wet areas the odes were using for reproduction.

What is the survival and reproductive success in your area of the food source for the local Dragonfly/Damselfly population? Low mosquito and midge count? I would think that if ponds are drying up so are the resources for larva/nymph.

@bobmcd Thanks for your comment. I don’t have stats to point to, but my impression is, numbers of biting insects have also been erratic here this year. We had a very short blackfly season, then normal mosquito numbers (which, for Northwestern Ontario, means more mosquitoes than all the mosquitoes)…also, above-average tick numbers and a wicked crop of deerflies. There was a sudden surge of very tiny mosquitoes about three weeks ago, but almost nothing since. We’re normally done with most biting insects by the end of August, so it’s not normal to have mosquito-free air before then. Our average first-frost date is September 6, which zaps almost anything left.

Are you familiar with the Odonata Central website? There are at least a couple of Canadian vetters for those records, including one who focuses on Ontario, who might have some insights about ode records in that province this year.

The vetter spreadsheet link on this page will give you contact info for them:
https://www.odonatacentral.org/vetter_list/#/

I have noticed the same thing here in Winnipeg. While there are some Odonata around, not in the numbers I saw, say, last year. So, a subjective assessment. The Red River was low for most of the summer, and it’s been hot for most of it, which is what I assume are the general causes.
Edit - the area I am talking about is one I visit daily, so my impressions are from a relatively discreet area. I’ve spent at least 10 years observing this area.

The two first points you raised seem to be very likely explanations, although it is difficult to infer trends from a single season and a single locality/observer. Having said that, it starts from single observers and you raise an important point. Changes in landscape (if happening in your area) are also not helping with shifts in phenology. I hope it is only an isolated observation you made, but sadly it is similar for unrelated species on the opposite side of the world. 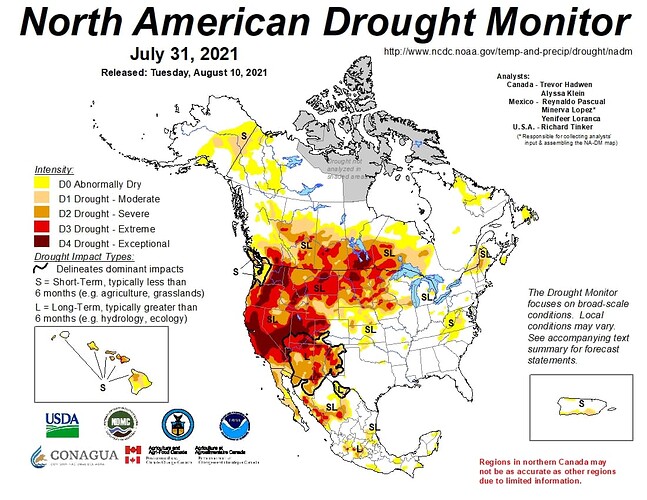 I live just below the two oblong lakes in the centre of Canada, and the OP lives just over the provincial boundary to the east. So, yes, dry.

FWIW - they seem low here in southern Ontario as well. While I don\t track total individuals seen, I do track which species I see. Places where I would normally expect to find good numbers show low activity this year. Darners in particular are hard to come by. It’s the lowest level of ode activity I’ve seen in the 6 years since moving back to Canada.

While the map above does not show southern Ontario as being in drought, I\m sure our weather has contributed to a poor season as well. While our total rainfall may be ‘normal’, the distribution has been anything but. It has been dry, dry, dry, dry then brief periods of intense rainfall then straight back to prolonged dry broken up by another intense brief rain.

Standing water bodies are way below normal in terms of water levels, the intense rain means the water cant get into the water table and just runs off into flowing bodies of water.

I am neither in Canada nor am I an odonata expert. I just live in an area where they are abundant. While I agree with the other posters that the data is too limited to have statistical relevance or allow inferences, I always listen up when I hear reports of this kind. The three main possible causes you mention don’t seem far-fetched to me, possibly a combination of those. There may also be others we haven’t considered yet that may affect your sightings. You may actually be unaware of them yourself, as you may have no way of knowing what your neighbours are up to.
To give you an example of what I mean, from the other side of the Atlantic and concerning pollinators: Where I live (Italy), vineyards abound. In recent years, owners are no longer practising full-time farming, they work elsewhere to make a living. That often causes them to work in the vineyard when they can, on weekends, very early in the morning, or very late in the evening as long as there is light. Or during lockdown, when there was no other way to get out if not with the excuse of having to tend to their land. It also often happens that they end up spraying outside of ‘traditional spraying periods’. The same is also true for other crops, of course. A bee-keeping friend of mine has asked farmers in the vicinity to please give them a one-day warning ahead of time so that the bees can be locked up for two days while the sprayed liquid dries off. My friend is trying to boost their compliance with a jar of honey now and then. Nevertheless, not all do at all times.

As for grasshoppers and birds, that’s of course possible, yet this isn’t what I am seeing here. I have tried to maintain and create a grasshopper-friendly environment, and there are indeeds loads (always, not just this year). I haven’t however seen an increase in insect-eating birds around here.

Invertebrate populations can fluctuate considerably from year to year for many natural reasons. While monitoring aquatic invertebrate communities for 31+ years (most locations annually sampled and several locations twice per year), I observed these fluctuations first hand. Unless you are aware of specific perturbations, I learned that interpretations of annual changes are best made based on long-term trends after an apparent change in a population has occurred.