I just got SCUBA certified today and I had dove a spring system and a sinkhole- many pictures were taken (take a look at my most recent observations and it’ll be quite easy to tell… unless you’re reading this right after I post this and haven’t actually posted the observations yet) and I remember a time when I was younger, snorkelling in a spring- a large bowfin came face-to-face with me, and just hovered there. In reality it couldn’t have been more than a minute or two, but at the time it felt like 10. Mutual eye contact, from terrestrial “lobe-finned fish” (me) and a strictly aquatic ray-finned fish. It was exciting, it was thrilling, it was special, and it is certainly my favorite memories underwater.

Had an opportunity to do some diving in the Andaman Islands a few years back. That was pretty spectacular. The water was astoundingly clear, so everything was tack-sharp.

Probably the day I met the lone Humbolt Penguin named Miguelito that lives on an islote off the coast of Ecuador… He means well, but he really likes to bite your wetsuit and will not hesitate to deflate a brand new dive marker :]

Just wrote down two snorkeling stories there, as they were actually some of my most impactful iNat-experiences anyways. Everthing feels more intense under water

Congratulations! One of my most memorable experiences would have to be my first open-water dive when I was 14. It was in the middle of winter, in a murky harbour, with nothing to see but sea cucumbers. It blew my mind

But for most spectacular, hands down, would be diving at Aladdin’s Cave, Fakarava atoll in the Tuamotus, French Polynesia. The visibility was incredible. The sound of migrating humpback whales echoed around us and sounded so close I expected one to appear any minute. Sooo many sharks. We decended through hundreds and hundreds, when we rested on the bottom on the edge of the pass they came cruising around, coming close to investigate us. We saw pelagic fish like dog-tooth tuna and huge fish like bump-headed wrasse. Manta rays flying through the water. Turtles. Then you enter into a current which you drift along, with the most amazing coral scenery on either side, no effort required. At the end of the conveyor you end up in a basin, and the fish and coral life was so diverse and abundant. We just rested on the bottom, looking, quite overwhelmed.
When we returned to the boat even the dive guide was buzzing, saying it was A +, so I guess it was a good day even for that amazing spot.
My husband and I joke (sort of) that is has ruined us for life now - nothing seems close in comparison.

I’m fortunate to have snorkeled in Maui (saw a Humuhumunukunukuapua’a), Baja with sea lions, Cozumel, Honduras, Belize, and Israel (Eilat). Belize is my favorite, because the reef is shallow and accessible with a variety of corals, sharks, rays, and fish, plus the food and people are great. https://www.inaturalist.org/observations/82150041

Swimming with whale sharks off Western Australia. They seem to move effortlessly through the water but it is impossible to keep up with them.

After spending so much time on overfished, bleaching, and otherwise damaged coral reef being dropped into a relatively unscathed huge and diverse old reef was pure majesty. I will never forget that. Like an ancient forest or how I imagine great mountains would feel.

Ah, I thought you meant something from a book or like that! Mountains are cool and scary at the same time, same with ocean.

Probably one of my most interesting underwater experiences was when I was snorkeling in La Jolla Cove. I would swim fairly far out and then come back in again.

At one point I looked to my left and less than 10 feet away from me was a big male California Sea Lion, just hanging there in the water.

He didn’t seem to mind that I was there, and I certainly did not mind that he was there, so I just continued swimming in to the beach.

The other great memories from La Jolla Cove was back when there was no restrictions on feeding the fish. I would tuck a big bag of frozen peas into my rash guard or shortie wetsuit, swim out, then rip a hole in the bag and feed the Garibaldi fish. Many of them would swim in circles beneath me, looking like orange flames in a camp fire. Occasionally a kelp bass would come over and take a pea right from my fingers, sometimes snagging my skin on his teeth. 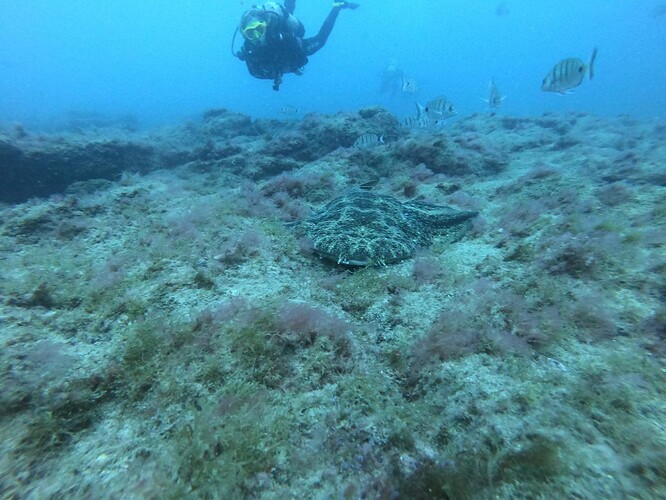 image1920×1440 240 KB
I dive regularly where I live in Fuerteventura in the Canary Islands. It’s really hard to say which is my best dive here, because all of them are great. Diving in the Atlantic Ocean allows you to discover a vast amount of different species as they migrate their way around the world. The Angel Shark is an endangered species, so catching sight of one of these sharks between the months of November to March in these waters is pretty special, especially as we realise they must be protected no matter what. So finding plastic fishing lines and hooks is truly annoying and heartbreaking as to the damage they can do to the angel sharks and to other marine life.
But yes, some amazing dive sites here with tuna, sting rays, octopus , barracuda, millions of sardines, parrot fish, trumpet fish, grupas, tiger eels, moray eels, vaquitas, nudi branches……
Sorry… going on a bit! But you get the gist! Love Nature!

I am fairly new to snorkeling having only started going last year and probably have gone out less than a dozen times, but as a result I’ve had many moments of awe when I’m observing things I’ve never seen before or have no idea what they are.

My first swim this year was very slow at first having seen no fish in the area that is typically most productive, I decided to swim in the area with marshy bottom even though it tends to be pretty desolate. It was there I observed my first filtering sea cucumber which used its appendages to grab food and bring it to its mouth, and shortly thereafter my first sea anemone which was very nondescript yet beautiful and after seeing the first I noticed tons of them. This didn’t add to the awe in the moment but after getting home someone helped me ID the anemone which ended up being an uncommon/rare species which, let’s be honest, who doesn’t like finding something unusual?

The coolest experience so far though was swimming with an American eel that was over three feet long. It was not bothered at all by my presence and I was able to watch it swim around hunting for small crabs and the like.

Many years ago, husband and I brought my sister and her husband on a dive trip off the Florida Keys. We went down about 50 feet and regrouped; then noticed we were entirely surrounded by a swarm of barracuda, jaws hangling low, a big circle at a distance of about 20 feet.
One glance, headshake no, and pointing to surface. Out of there pronto.
I’ve often been diving with sharks, but never felt so unsafe as that time.

I started snorkelling more regularly in the last couple years. My favourite experiences have been this Florida Gar that swam in a circle around me in a spring in Florida, feeding invasive crayfish to Fallfish, and finding catfish burrows (which I didn’t know were a thing at the time). It’s a whole different world down there, I wish I could do it more often!