In the spring, I’m thinking about planting natives in an area of my garden. I’m doing this to try an increase the biodiversity in my yard. However, I have a couple of questions about doing this.

Thank you in advance for the responses.

How do I obtain native plants? Is it bad to collect plants from the wild?

You should not collect plants from the wild. However, seed collection can be done. HOWEVER, it is very important that you have the appropriate permission/permits from the land owner/manager and that you collect in an ethical way. I highly suggest reading through this PDF from The Xerces Society. There is undoubtedly a Native Plant Society for your state. Look them up. They will have a code of ethics to follow for seed collection. Many times they will have seeds/plants available, so you may not even need to collect.

Are weedy natives a good choice (ex. woodsorrel and ragweed)? It seems like they might take over an area given the opportunity.

Research every species before you collect/purchase seeds. As a note, ragweed is likely not a good choice as it causes hay fever.

What are some good plants to grow in New England? Unfortunately, I can’t grow trees or large shrubs.

Check out the native plant finders from The Audubon Society and The National Wildlife Federation. Additionally, the Facebook group Gardening with Native Plants may be of interest to you.

Native Plant Trust is an excellent resource for New England. They even offer classes.

Tell me about the area where you want to plant (sunny? shady? dry? wet? sandy?) and I can come up with a list of plants that will probably do well for you.

Thanks for the additional info! I’m planting in a small area of my garden, which I recently cleared of weeds and grass. After removing the grass, the area dried out a lot, but I think I could probably solve that by either adding mulch or planting natives there. The soil is slightly sandy, and most of it gets partial sun.

Ok, here are some suggestions. Not all of these will be easily bought at garden nurseries, but they might show up. Also, I know these are native to Massachusetts, but I’m not certain they are all native to Rhode Island.

Various other asters and goldenrods would also be good, but I don’t know enough to say which ones would do better in a sunnier/drier site versus a shadier/damper site. E. divaricata spreads itself around in my garden in dry shade; Symphyotrichum cordifolium does well in a somewhat sunnier and damper site. S. laeve is a beautiful and well-behaved aster in my garden. New England and New York Asters are always worth trying.

I’ll leave you with advice from my mother: Keep planting things until something does well; then plant more of that.

Thank you for the comprehensive list! These all seem like Rhode Island natives, and I’m right next to the Massachusetts border anyway. I have some goldenrod seeds I’ve collected near the beach, they don’t like northern seaside goldenrod, so I think I’m fine planting them. I think they may need stratification, so I’ll toss them in the fridge until the spring to see if that helps.

Pokeweed might be one to avoid if you have small kids, it has big showy berries but is quite poisonous.

Keep planting things until something does well; then plant more of that.

and that becomes the signature plant in your garden. For example Salvia lanceolata here 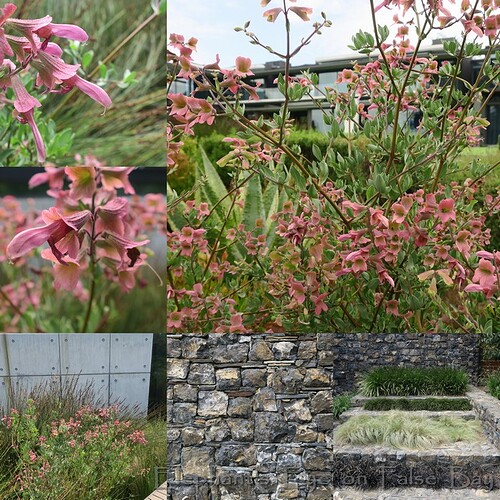 What a beautiful plant!

Keep planting things until something does well; then plant more of that.

The corollary is pay attention to the good plants that volunteer and encourage them too. I didn’t introduce prairie sunflowers to my garden, birds did that, so I collect and spread seeds and keep getting more. 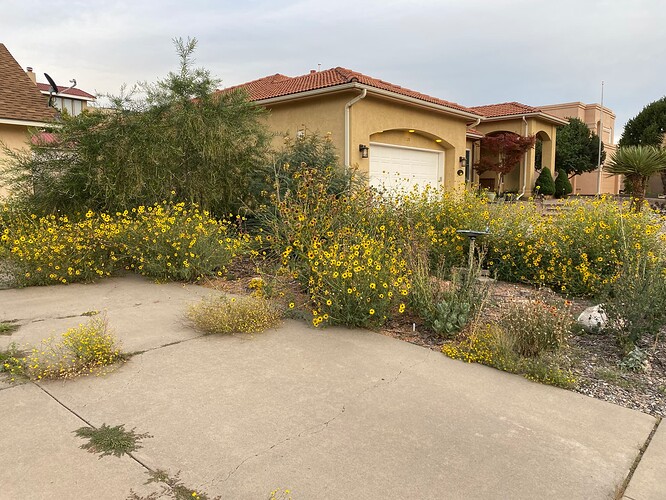 The White Wood Asters, Solomon’s Plume, and Symphyotrichum cordifolium were in my garden to begin with, and I encourage them, mostly. Ditto the Common Milkweed that showed up one year, although I try to restrain those to life among the rampant Hay-scented Ferns I have tried and mostly succeeded to discourage the Oriental Bittersweet, exotic Lonicera, privets, Norway Maples, and so on that also want to live here. Gardens are a lot of work!

A few resources i found, becuase i’ve looking into native preferred for my own pollen garden.

As others have mentioned, there’s hundreds of choices for native plants for a New England yard. I’m from New Hampshire, so I’m familiar with the sandy soil natives that do well on the often poor dry conditions we have. You would do well to locate your state’s native nurseries, which is the best place to obtain natives while supporting this growing industry. Specific resources I recommend are:
https://grownativemass.org/
https://wildseedproject.net/
https://www.ernstseed.com/
https://www.prairiemoon.com/

And there are many excellent books for northeastern native plants for gardens, such as ’ The Northeast Native Plant Primer’ by the Native Plant Trust, ’ Native Plants of the Northeast: A Guide for Gardening and Conservation’ by Don Leopold, ’ Deer-Resistant Native Plants for the Northeast’ by Ruth Clausen, ‘Pollinators of Native Plants’ and its companion book ‘Bees: A Identification and Native Forage Guide’ by Heather Holm, and ‘Planting Native To Attract Birds To Your Yard’ by Sharon Sorenson, to name a few.

Should I plant adventative plants? I’m looking at Penstemon digitalis in particular, which is apparently adventative in my county/state.

I think hirsutus is closer to a true native there, but most penstemon fill the same ecological niche and do well in gardens. Get as close to pure seed as you can, as opposed to the many cultivars.

Cool, I’ll keep that in mind.