I have a single taxa obscured observation in a smallish park with project, so …

An obscured observation will never appear in a project based on a small geography. This is an intentional design choice to stop people getting access tò real locations by manipulating the boundaries of projects.

Can curators see what, the observation or the real location? They wont see it in the project, its not there, and curators cant see real locations of obscured records either.

I don’t believe so.

Can curator see my observation and it’s location if I don’t actually join the project?

There are 2 different kinds of projects, collection and traditional. Most projects are collection projects.

On these, all records that qualify to be included automatically are added, you can’t actually stop it from being added. Effectively, they are really just a saved search. However, based on the rule above, any obscured record will not be added to a project based on a small geography. If any part of the obscured record’s obscuring boundary box falls outside the project’s defined geography, it will not be added.

Since it is not added to the project, the project admins can not see the real location. 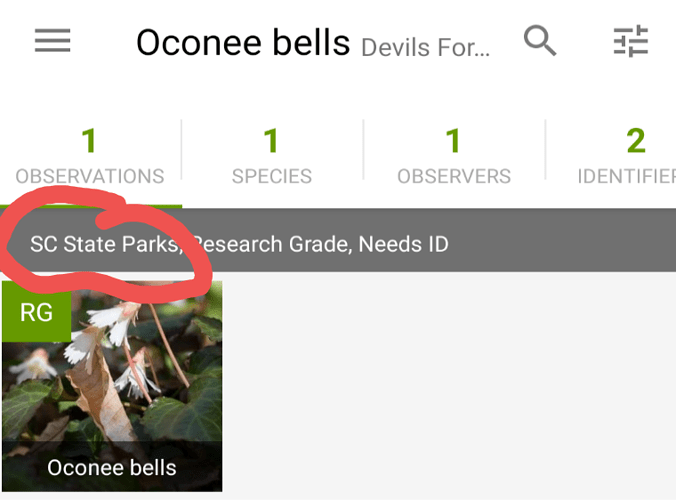 An obscured observation will never appear in a project based on a small geography.

there are exceptions… such as small “standard” places (ex. countries, states, counties, or equivalent)

Is there a way to do filter for my obscured observations at this house only?

If this is too much of a tangent to the original, just ignore, please. :)

i didn’t check to see how the app works, since it’s more work to debug by looking through the logs, but i can tell you that in the website, a query on the Explore page appears to get data via authenticated requests, whereas the Project page appears to get data via an anonymous request. so that would line up with the behavior you’re noting here. if the system knows who you are (in the case of an authenticated request), it can return that obscured observation to you. otherwise (in the case of an anonymous request), it won’t.