I opted in, and so far much prefer the new option. When there are only a small amount of observations the tiles can be hard to see, but otherwise it’s great.

Nice! The taxon pages load much quicker! Well, the tiles do - still have to wait for the actual goog map for quite a long time.

I see that the new tiles don’t come up on maps on observation pages.

The red is very hard to see. I had to look really hard to find the two pins in the Americas on this one. May I suggest white would be better? 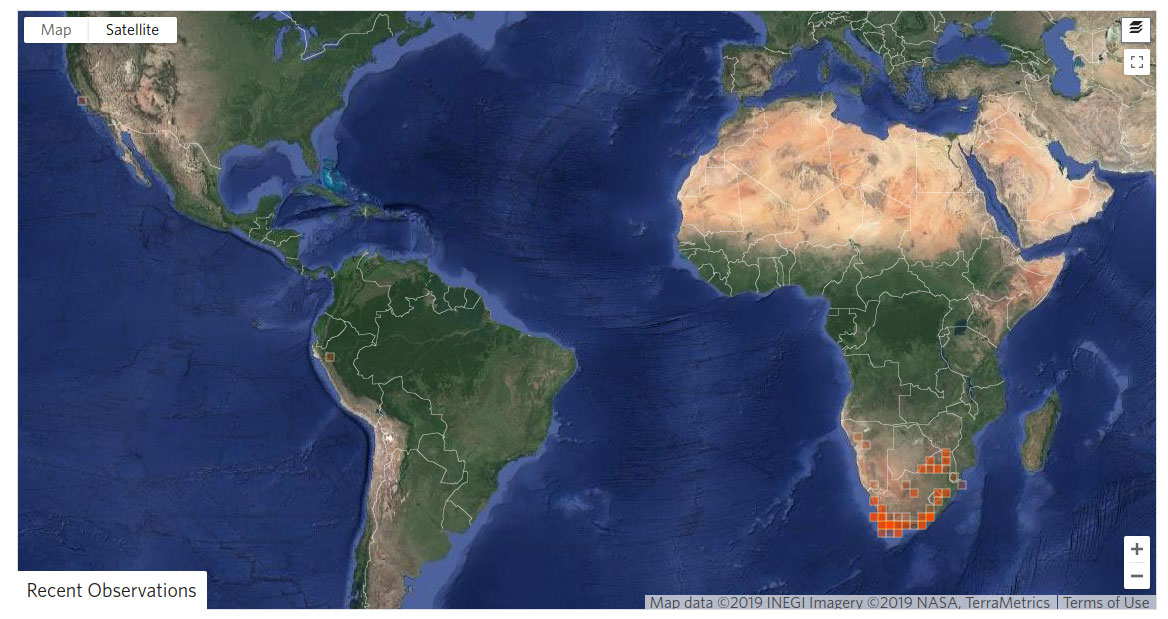 Thank you so much for doing this! Waiting for maps to load has been a real drawback to one’s enjoyment of the site.

-> The red is very hard to see.
That is a big drawback, esp for mopping up CV errors that tend to be single obs dotted around the world. It isn’t so much the red/orange as the translucency. If there could be a better way of indicating single obs more clearly.
->I see that the new tiles don’t come up on maps on observation pages.
Yes they do, you gotta zoom out though.

pin method is much better at every scale

Why not aggregate the obs into circles not squares?

i think the issue is just that for the same height and width, circles are smaller than squares and don’t provide full coverage of the space. i think the existing circles actually are very similar in concept to these squares, except they are oversized (at maybe 16px x 16px to represent a 4px x 4px square – didn’t measure exactly) and therefore overlap each other quite a bit. these new squares appear to be 8px x 8px and represent a 8px x 8px space, and i suppose you could style the circles to be 8px x 8px, representative of a 8px x 8px space, as well to solve the overlap problem. but i bet some people might be confused about a circle’s lack of full coverage of the space, whereas there is no question with a square.

i personally like circles a little bit more (or smaller squares) because i can see bits of the basemap even when the circles / squares are full opaque, but i understand why they chose to use a full-coverage square.

I’m really struggling to work efficiently on IDs for spp where there are single obs spread over a wide area. the reds get lost where the land is brown, the greens get lost where the land is green. Blue works the best. Switching from satellite to map helps on the reds but the greens and blues get confused with forests and lakes. The translucency of single obs is the main issue. Which has me wondering if we need colour to distinguish kingdoms? Why not instead use colour to indicate density from sold blue for single obs to solid red for the highest density, then it will be a heat map similar to this:

if you’re going to scale along a color gradient instead of opacity, i think such a map looks better if you’re using relatively small squares. in the case of the new test squares, since the squares are relatively large (the tradeoff for clickability and speed of processing), i think a color gradient approach will look bad. below are examples that may help to show what i mean. these examples are using 4px x 4px squares, which are smaller than 8px x 8px squares, but are already clouding up the map. (they use a different color gradient than your example, but they are using iNat data, though probably are scaled a little differently than the test tiles). 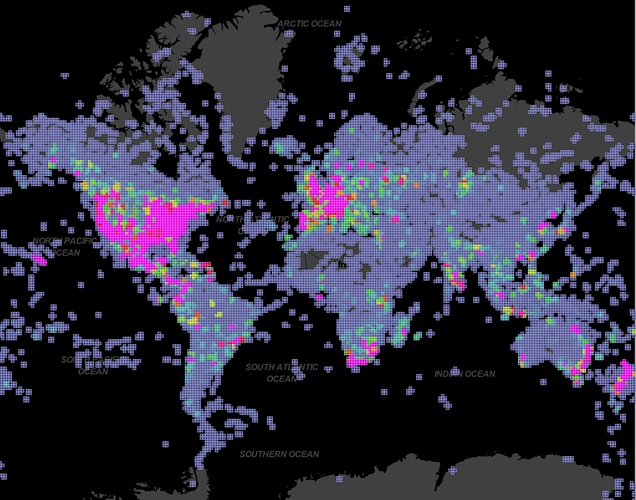 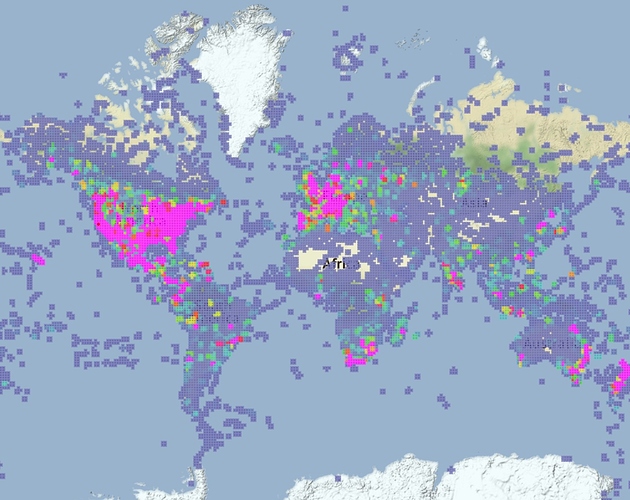 (compare the above examples to this: https://forum.inaturalist.org/t/observation-density/6305/6, which is a density map from GBIF using iNat data at very fine resolution – very beautiful, in my opinion, but very resource intensive to create and not clickable.)

i think the best thing to address the concerns about color getting lost in other colors is use a solid border that is a color that will pop over any other color likely to show up on a basemap – like magenta or possibly yellow. but that will look a little more garish than the white border. or maybe if you just have solid yellow or magenta in the corners, it might not look as bad. 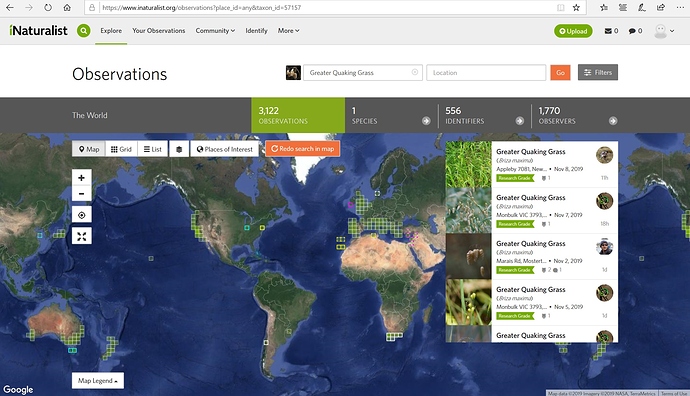 Also bear in mind colour-blindness. Any colour gradients will have to be tested for this.

True, but that’s very much a possible problem already with the existing system and the proposed system.
(note, I was replying to Karoopixie re colour-blindness. I hit ‘reply’ before typing,so I don’t know why it didn’t acknowledge this)

Although I typically use maps to compare iNat against other resources, I concur that single obs are too translucent to see without really hunting - at least in my interest area (moths). As configured now the old map tiles are much clearer to see both single obs and public vs obscured.

Given what I show below, I hope the devs can make adjustments in opacity so we can find what we’re looking for…

EXAMPLES:
At this zoom ratio I can sorta see the two obs squares but they’re too zoomed out to click each one: 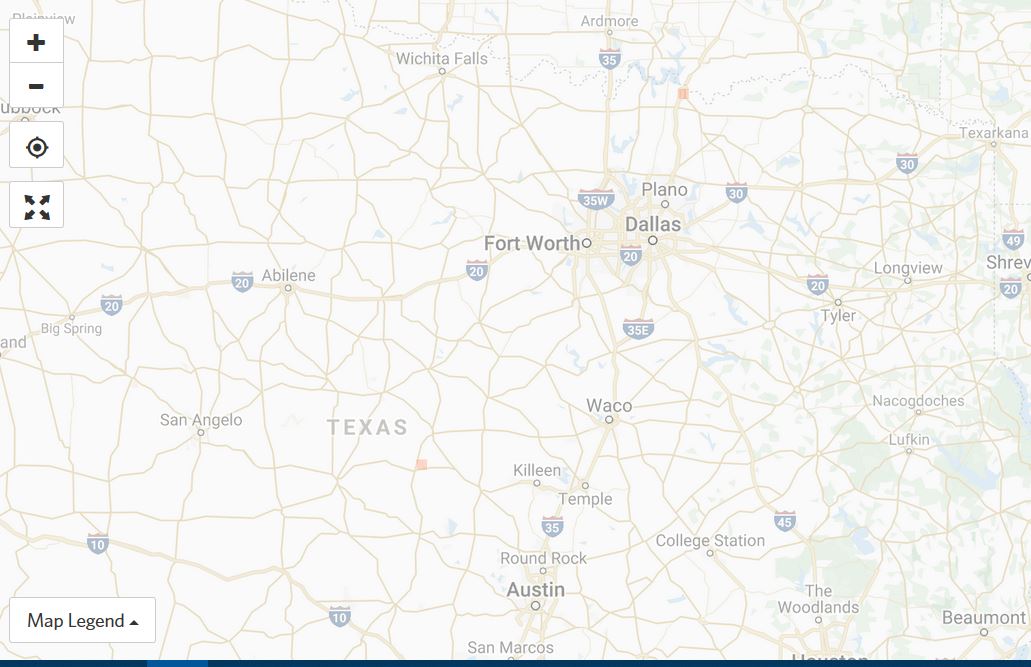 If zoomed in enough to be able to click they’re almost impossible to find: 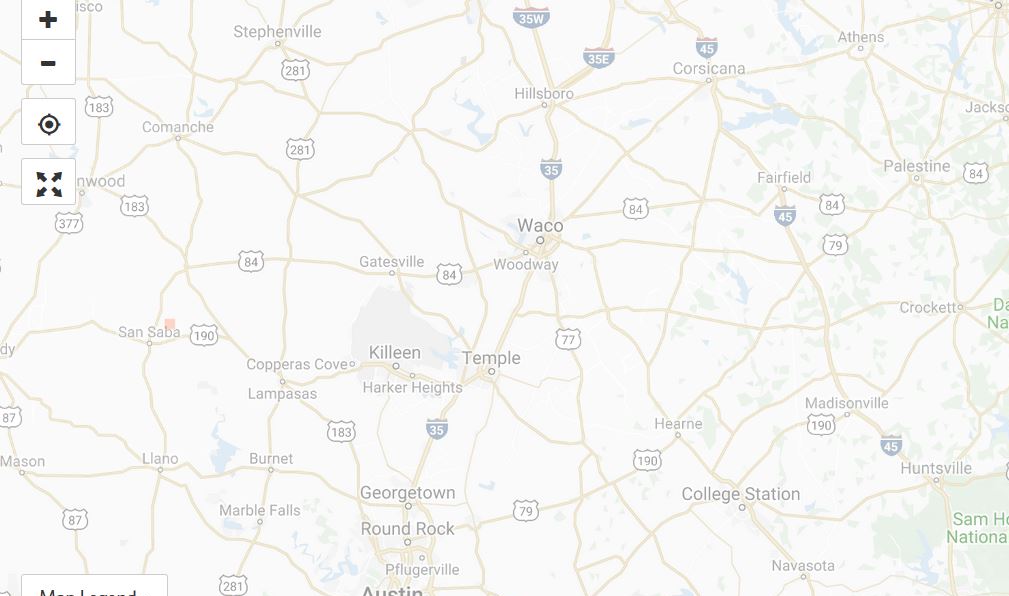 Thanks for eliciting our feedback.

A few people have mentioned multiple ob at one location. Although I have to take on faith that there may be 100s of 1000s of obs at one point, most of us will have more modest requirements.

I know nothing about how maps are generated, or what difficulties are subsumed in adding obs to tiles, but I’ve found that Google Earth Pro has a possible method to show multiple obs at a point. I’m just throwing this out in case it’s useful to iNat 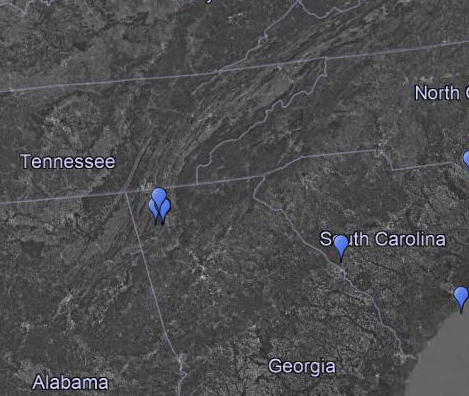 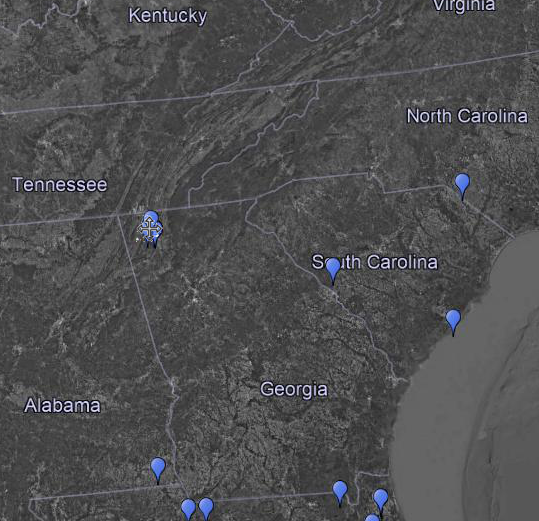 After clicking the 4-arrow cursor the point “explodes” into the number of individual points at the location. Then each point when clicked shows the “data card” for that one point. This example is only one species, but have used it to show 3 different species (different colors) at same location. I think the largest number of individual specimens I’ve had at one point so far is 32: 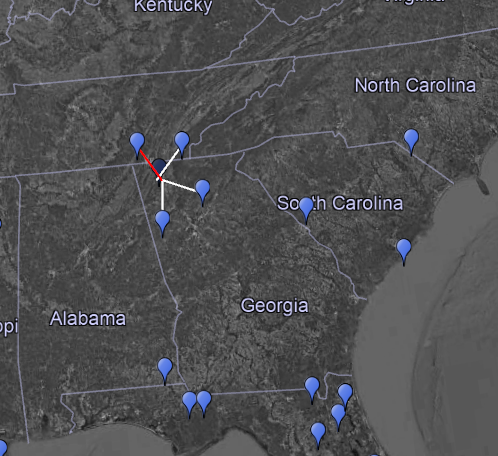 (note, I was replying to Karoopixie re colour-blindness. I hit ‘reply’ before typing,so I don’t know why it didn’t acknowledge this)

I find it safer and clearer to always quote the text to which I am replying, even when it is clear from context, as in your case of replying to the colourblindness…

To me, I would expect that reply indication in the top right of the post even if it is immediately after the post I am replying to. @tiwane is it a setting in discourse that could be changed, ie always show reply indicator? (apologies for off-topic)

This change seems like a classic case of “less is more”. The markers are certainly more information rich when presented in this way, and the performance/scaleability improvement provides a double win.

However, I agree with many others that the markers aren’t clear enough. The borders need to be completely solid and a darker shade of the centre colour, otherwise they start to fade too much into the background when the opacity decreases.

I also agree that clicking markers with multiple observations should show a list. If the list is long, the observations can be loaded in batches as the user scrolls through them.

I think I have it working now. If it’s not, please direct message me.

OK, back to discussing map tiles…

I do like this new approach, especially that it retains the pins at finer zoom levels. I especially like the ability to test the change and give feedback, and the ability to “opt-in” over time to adapt to the new change at a time that suits. I remember one change to the system that implemented right as I was doing a presentation (fortuantely a small group), and it had me spending the entire presentation time trying to get my head around the change!

Another possible solution to the difficulty of seeing single-obs-tiles is to allow people to toggle the translucency in the layer panel. So with translucency on one sees it as the testers are seeing it now, with translucency off we see all the tiles as equally solid, which means one loses the density info but one can quickly find the single obs tiles that one was overlooking.

3 posts were split to a new topic: Why do observations map outside county borders?

I was just thinking something along the same lines. A simple toggle for “Presence” (solid) vs “Density” (the current variable transparency) would leverage this new tile system to allow the map view to convey useful information that wasn’t easily gleaned from the original dot view.

I definitely prefer it already even as-is.

Could there be a possibility of offering both, with the new grid version set as default? Sort of like how we have the choice of how to display observations in grids or lists.

That said, I like the new version, so I don’t think it’s a bad thing if we just go with this.

These new maps are fantastic. Thank you.

One concern with the orange squares is you can’t see them over the bold orange outline of the area you select. In my example below the orange squares on the eastern sea-board are hard to see and this is exacerbated for smaller islands like Mauritius or Reunion.

Perhaps this can be resolved by making the line indicating the extent selection to be a fine/hairline and/or black/grey? 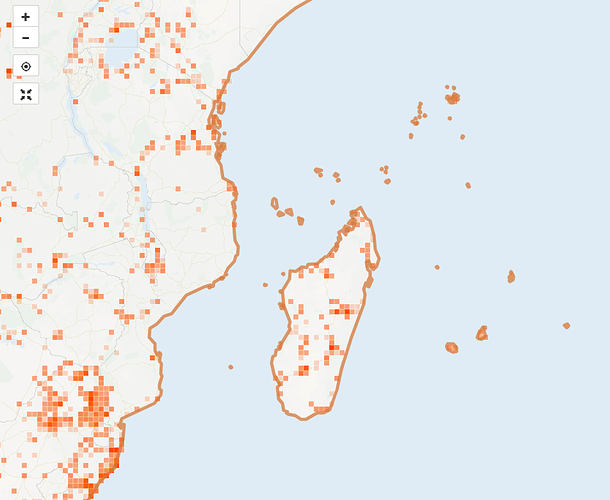 I really don’t like the look of it. It looks like a row res pixelated image. It does convey some information when the observation are dense but when they are not dense it is hard to see. However, the extra speed might be worth it.