Ive done some online searching and found a few decent looking recipes for different baked goods with Pawpaws, but would rather try known firsthand good ones :) Pawpaw season is here and I am getting tired of just eating the fruit (scandalous I know!). I love pawpaws I just get tired of the flavor after eating so many over such a short time frame so I would like to bake!

Particularly interested in “simple” recipes.
Unless you have a macaron recipe for them…i love making macarons. Or maybe a recipe that would work as the filling of the macaron…

I know one can make pawpaw ice cream and it’s supposed to be fabulous but alas, I don’t have a recipe.

Ive heard the same but I dont have an ice cream maker or way to make it easily. If i had the quantity i would probably ask a local confectioner place to make it for me xD they do small batch local current fruit in season batches of things including gelato and such.

Well I tried a recipe for cookies I got off some website I cant remember where. I decided to edit the sugar though, it needed more sweetness. I went for one that didnt add other spices and such. It definitely tastes like a pawpaw cookie. Really interesting was how the center turned red, I didn’t expect that! It took about 6 pawpaws to make, some large some medium some small so I would say i can get about 1 oz of fruit off of each pawpaw on average (6oz = 3/4 cup it called for). Very fluffy soft cookie! 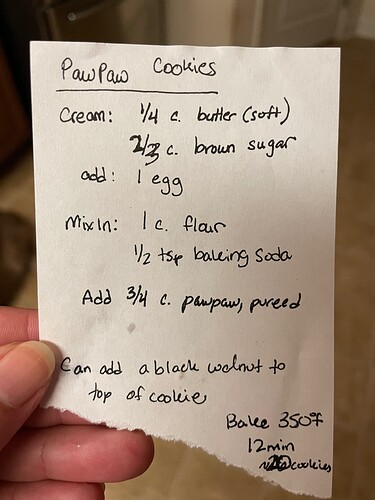 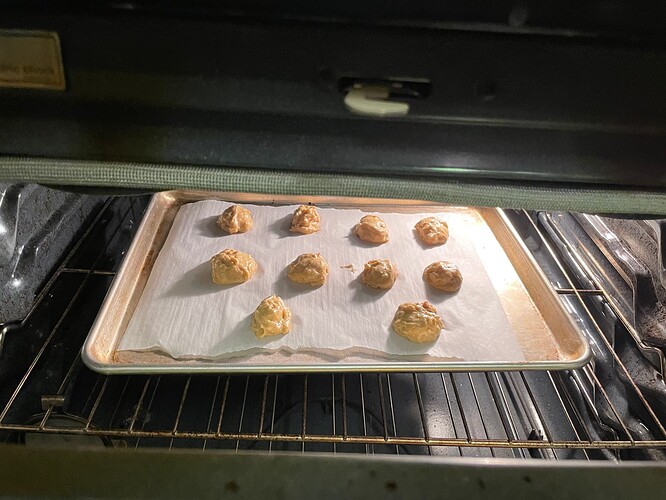 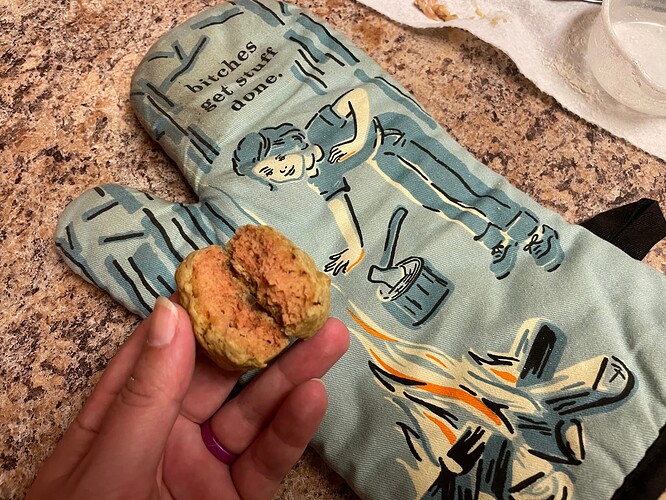 ). If I had more to play with I’d play with the custard aspect. How about panna cotta with the puréed fruit folded in? Or in horchata?

This sounds great. Any standard base would likely work, or a recipe calling for another fruit purée. Substitute pawpaw in that case.

Thanks for the recipe! I tried a cake and couldn’t taste the pawpaw at all - so disappointing.

Do have a yard or a patch of dirt somewhere? I’ve got 2 trees in my small yard. Took a little work but so worth it! If I knew of a place to donate seeds, I would.

I recently made a super simple pawpaw recipe that everyone loved. I took one of those little Jello Vanilla Pudding mixes - the 4 serving one, it’s just powder that you mix with cold milk and used it like this to make pawpaw pudding:
Put an envelop of Jello Vanilla pudding mix in a bowl.
(optional) Add 1 tsp Xanthan gum (makes it a little thicker but not needed. and stir
Pour in 1 1/2 cups cold milk (box says 2 but only put 1 1/2)
Add flesh from one large pawpaw and stir well. (My large pawpaws yield around 3/4 cups flesh)
*I put my pawpaw flesh in the blender to smooth it out but it’s not necessary.
The pawpaw flavor with the vanilla is nice.
O! and this will thicken in about 5-10 minutes in the fridge. 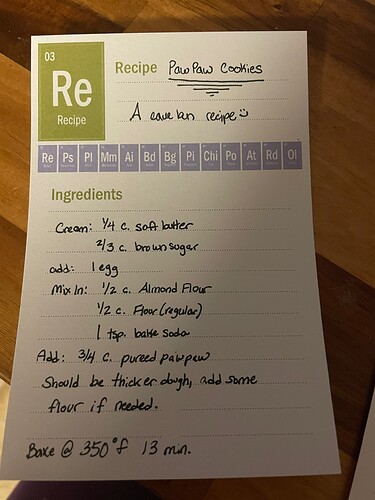 I also made PawPaw macarons; the filling has pawpaw (see frosting recipe) and the macaron is just vanilla (dyed in a orange yellow swirl because thats the pawpaw flesh color. I meant to dye the icing too, but forgot). This is my absolute fav so far. I had leftover icing so will be making a cake later xD 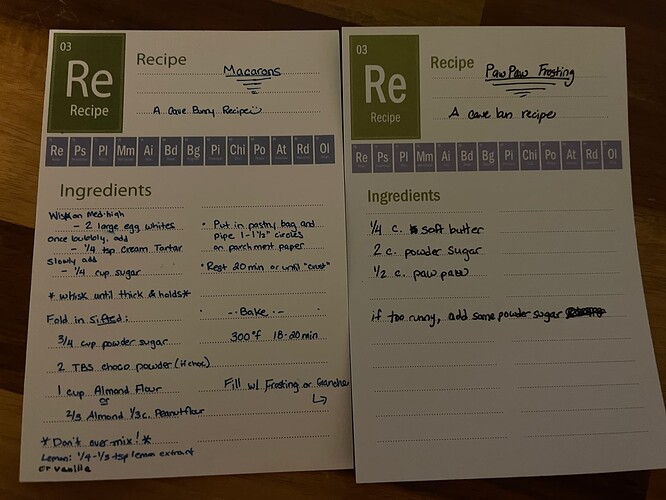 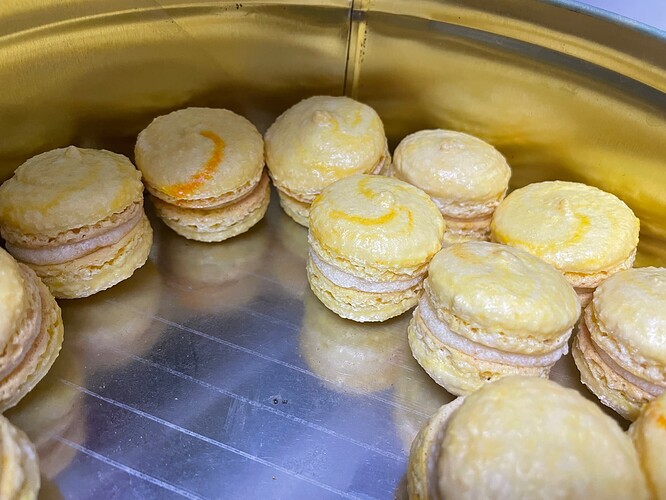 Those look so amazing😋.

Someday, I would love to try a pawpaw. I did not even know they were a real thing until recently. I barely recall snatches of a song I learned as a toddler. It went something like,

Ive never heard that song! We didnt have pawpaws where i grew up though.

I had sad news though; few times now bad stomach pains, nausea, and headache after eating my baked pawpaw goods. Apparently being allergic to pawpaw is a thing, and cooked pawpaw especially - some folks are fine with fresh but not baked (apparently some interesting chemistry). Ive never had issues eating the odd fresh pawpaw here n there but this is the first year we have found a good producing grove so i had extra to bake with. While my bakes are being loved (and no one else is affected!) they take a lot of time especially since the prep is so long…so im probably done experimenting. :’( i have no idea what else it would be, its the only constant before i get ill. sigh of course i have to have the weird friggin allergy. Isnt the first one unfortunatly (i have a whacked immune system).

Oh, sorry you got sick from the pawpaws. I’ve never seen a paw paw.

Maybe it’s just an intolerance rather than an allergy? A period of abstinence and moderation may help? I developed an intolerance to apples years ago from eating two a day for many months. It eventually cleared up, happily.

Make sure you completely remove the skin and seeds before eating. Seeds are easy to avoid bc they are so big but the skin in thin. Before I blend my pawpaw flash, I look it over carefully and mash it a bit with a knife or fork to make sure that there aren’t any smaller malformed seeds.

No one else is getting ill from the bakes it is only me. And i am only reacting to baked / cooked pawpaw, not raw/fresh. Tested that tonight.

To be honest…everyone says my first cookie recipe was the better one. But to me, it smells good and touching my tongue it is great but as i chew it gets bitter and soapy flavored; then cant taste pawpaw in it at all. But Everyone else says it tastes just like pawpaw in cookie form so I assumed it was a bit of skin i missed. But its consitant to me and no one else gets that change. Must be like the cilantro issue some folks have - i love that but to my partner it tastes like soap - so i imagine its like that.

The macarons? Awesome. And i dont get sick on them. But its fresh pawpaw in the filling. And i ate a pawpaw fine. Ate another cookie and it was more bitter and soapy than i remember, and I got sick. So yeah. Weird. Def a cooked/baked issue.

@teellbee i think more on the side of allergy, i do have some food allergies and it hits me exactly like those do. Its just weird how raw is fine but baked isnt. I will have to be careful though. Onion is one of my food allergies and for a long time dried powder was fine but used it all time and now it isnt. If garlic joins the list ill be very sad.

I still love the flavour and will continue to eat the fresh in moderation :) I just won’t be baking with it anymore. In my 1 hour of googlefu research there is some info out there from University of Kentucky that it does seem cooked tends to get a much higher rate of reaction to it. There’s some really interesting chemicals in pawpaws and I just scratched the surface. Still plan on planting them and enjoying the fruit itself :)

I have a lot of seeds to currently sow thankfully!

Familiar with the cilantro soap gene; I don’t have it, but The Doctor does.

I’ll have to look up that UofK research; how chemical compounds change and recombine during processing is both interesting and understudied. Then you get into what compounds are found in different parts of the plant; coriander seed comes from the same plant (Coriandrum sativum) as cilantro leaves, but the seeds usually don’t trigger the chemosensitivity caused by the soap gene.

It’s a bummer that cooking ruins pawpaws for you. I’ll bet you could freeze the mash and use it the same as fresh, though.

Yes!! I love the chemistry of baking, lately been making various French things and I feel like its all the same four ingredients combined in different orders & fashions, haha! But they produce very different things!

Must be like the cilantro issue some folks have - i love that but to my partner it tastes like soap - so i imagine its like that.

I wonder if that can change though? For me, it was the thing where papaya tastes like vomit; but after being in the Dominican Republic long enough to have lots of exposure to papaya, that seems to have lessened.

I feel like its all the same four ingredients combined in different orders & fashions, haha! But they produce very different things!