Edited for clarity: placeholder text used by the observer on uploading. Greyed out when uploaded, but identifiers need to look for it when IDing Unknowns (before iNat vanishes it with the first ID)

#GSB22 IDathon is done, and I have turned to

If you can’t beat them join them. Make this system work for you.
Starting with Cape Pensinsula obs condemned to languish in planty limbo.

Some are not even planty - I found a pair of preying mantis there. I have cleared the 3 and 4 year olds. Now working thru City Nature Challenge. No. Not from this year. Last year’s! Observers and identifiers who politely follow iNat’s bad advice to just Plantae. Those obs have never been seen, identified, counted. They have effectively been binned on uploading - and those newbies have abandoned iNat as pointless. Specialist identifiers expect to be able to filter Needs ID - for plants to family at least.

Advice made more malicious when iNat disappears the info gullibly left in Placeholder.

Tell me - who uses ‘placeholder’ as intended by iNat to be temporary?

Please iNat - add one word to your code for me?

Do you mean placeholders as non-taxonomical ids or as broad ids? I just can’t fully understand. If you mean first I never use them and when identifying it depends on what group it is, I can add it as own id and write that it’s the observer’s id or add it in the description of my own id that can be different. If the latter, then botanists I know search for Tracheophyta, so iding dicots is more than enough, I try my best, but sometimes it’s just too hard, both for local plants and something from the other part of the world. I don’t use Plantae unless it’s completely confusing which alga it is.

That placeholder box we see when uploading our obs. Top left. Prime real estate on a website shouldn’t be for temporary.

And we should be able - as we can with notes - to decide to edit or delete it for ourselves. Whatever the info was, it vanishes.

I have seen newbies writing out careful species binomials - which vanish behind Plantae.

The contrast between First and Third World in how many botanists there are.

iNat could make it more visible when there’s a placeholder, on id tab they’re not shown with other ids, and is seen in a different place, hardly visible. I guess that is why many iders id over placeholders. But also observers have to get more guidelines at the start of their use of iNat if they miss that they add placeholders (some can’t even find where to add an id at all). I think there was a request to replace placeholders with comments.
I don’t like dividing countries to the “level” they belong to, esp when they’re not deciding what and how they’re, we should work more on inviting local experts around the globe or observations will stay stuck even with species id.

I have been hammering out @mentions and grateful for all the support we have received.

Perhaps I don’t understand something (although based on the discussion in other topics and groups, I’m not the only one), but I don’t understand the “placeholder” function. The information in it is not available in the search, it is lost in later identifications (if I understand correctly). If an observer has some assumption about an object (but is unsure of their correctness), wouldn’t it be better to state it in the description? That way, at least the information won’t be accidentally lost, and such observations can be found by keywords, for example:

I find it hard to see how the placeholder functionally complements the description. Does it give additional features (not otherwise available)?

I agree with you. I feel it is a deliberate boobytrap for newbies. Like hazing / initiation ritual. Your examples are from the ID box, not the Placeholder text.

But I am curious if anyone can tell me of a valid use for it. The forum is always interesting for varied workflows.

When I ID Unknowns for the Rest of Africa, the binomial is often in placeholder due to a tiny typo, which prevents iNat offering that ‘valid’ name. Or it is a missing species which needs to be Flagged for Curation. Perhaps a common name in another language. All are important and should not vanish unless the observer choose to delete.

I have made a fake post as an example.
Did you see the greyed out Placeholder text?

If I had used Searsia glauca as Placeholder, not ID - the useful info would vanish behind Plantae. For me as the observer also.

Yes, I see at the top left “Unknown (Placeholder: filler) Needs ID”. But I still have the same question: what features will be lost if “filler” is written in the description (“Notes” section)? In my opinion, we just get additionally exactly what you wrote: the information will not be vanished unless the observer chooses to delete.

If it’s true, shouldn’t we use Occam’s razor (“Entities are not to be multiplied without necessity”)? In other words: why change the behavior of a placeholder (which requires resources for development and testing) when other entities already have these features? Wouldn’t it be easier to just reject the placeholder in this case?

I’d prefer it this way: 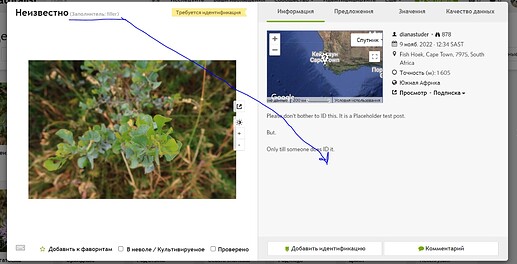 image1710×875 105 KB
@kgrebennikov most placeholders are not intentional, it’s either a typo in latin name or non-binominal ids like “flower”, “wig”, “feather”, etc. or common names not in the system, in first and last cases they shouldn’t be lost after a regular id comes in.
6 Likes
whitneybrook November 16, 2022, 12:44pm #11

iNat could make it more visible when there’s a placeholder, on id tab they’re not shown with other ids, and is seen in a different place, hardly visible. I guess that is why many iders id over placeholders.

My own preference would be to delete the placeholder altogether.

If you don’t have a formal ID, write whatever in the notes. Where you can later delete it if / when you choose to.

It happened to me too often that the *&%$ing placeholder
vanishes
just before
I remembered to look for it, and read it.
Now …
What did it say?!

Now my iNat autopilot is trained to
Placeholder??

I’m working on retraining mine. I’m sure I IDed hundreds, maybe a thousand before I understood what the placeholder is.

and it’s not like Mavericks.
There is no way to go back and search for missed placeholders.

There was a click click click workaround in the forum for each single obs. Not going back thru all my Reviewed obs to find them. If it stayed visible in Notes, any skilled identifier who came to it later, could pick up what we had missed. If.

I understand that this is not the main issue. But “temporary placeholder” is redundant. Placeholders by definition are temporary.

My own preference would be to delete the placeholder altogether.

I support this, or just have the placeholders show up as its own box under the observation (i.e., we currently have “suggested an ID” and “commented” boxes, why not add a “added a placeholder” box).

A warning notification “something wrong with your id: …” would be definitely better!

Placeholders by definition are temporary

No. Neither I, nor the original observer expects prime website real estate - to be temporary. This is most particularly for newbies who are still finding their way around the site. Been there done that knows to avoid the placeholder trap in future. But many identifiers are not even aware that They Have BEEN Trapped.

Or - if it is temporary, then hide it down at the bottom where we have to hunt for DQA etc.

That’s undoubtedly what I mean. I seem to recall that sometimes I also accidentally created “placeholders” by typing in the name (missing or mistyped letters due to inattention). But there is no point in saving such information, it seems to me. If the information has significance - it can be placed in the notes / comments, where it can be found through a request (api), and it can be deleted only by the observer and only consciously. The correctness of the name and the language in which it is written in this case is not relevant - “tree” in Russian, for example (4 observations):

Am I missing something? Is there an actual “placeholder” field on some of the submission platforms? My understanding is that a Placeholder ID only gets added when someone misunderstands/misuses what is called the “What did you see?” field on the android app or “species name” field on the website. Changing the terminology to “temporary placeholder” when a placeholder gets added won’t fix the problem because the fields where the placeholder is entered is not explicitly for placeholders.