Extant redwoods comprise three species, each in its own genus. Having observed two of them – Coast Redwood Sequioa sempervirens and Giant Sequoia Sequoiadendron giganteum – and soon to upload several more observations of Coast Redwood, I was curious about the thrid one. Dawn Redwood Metasequioa glyptostroboides.

When I look at iNaturalist observations, filtered to show only Research Grade, I see the following map: 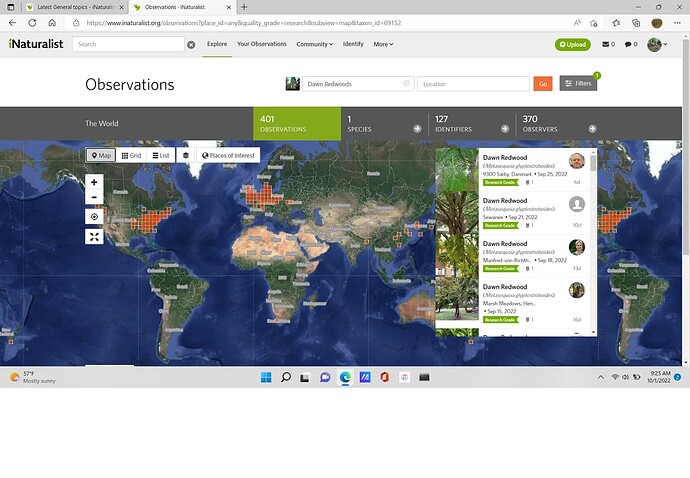 image1287×892 112 KB
Now, according to Wikipedia, "It now survives only in wet lower slopes and montane river and stream valleys in the border region of Hubei and Hunan provinces and Chongqing municipality in south-central China,[2] notably in Lichuan county in Hubei. Zooming in on the map, I find only two observations in those localities: 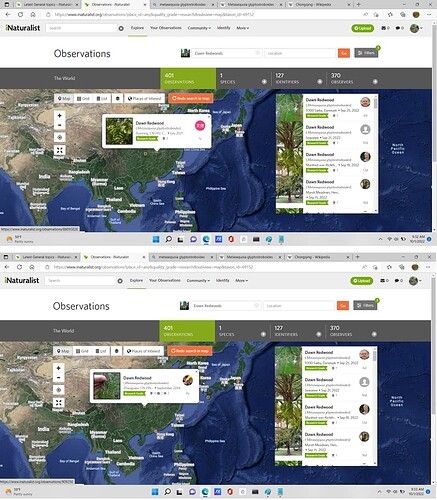 image864×988 129 KB
So, presumably, the other 399 observations are wrongly Research Grade and should technically be marked as casual. Now, ordinarily, I would hesitate to do this, since I am sure that those observations are important to the observers who made them, and it just seems like a mean thing to do to go through and do something like that wholesale. There was a whole thread about someone doing this with Bison: Wild American Bison are captive? - General - iNaturalist Community Forum, and an ensuing debate about whether this was appropriate. With trees, it is a bit different, since, per iNat guidelines, a tree planted by humans is captive/cultivated forever. However, with Dawn Redwood, I see two important factors, again from Wikipedia:

The first of these suggests that marking all Dawn Redwoods as casual ouside of Hubei and Hunan would help to emphasize the dire straits the Dawn Redwood ecosystem is in; as the Wikipedia article further notes, “The species will continue to live in yards, parks and on roadsides all over China, but the M. glyptostroboides forest ecosystem could disappear when its mature trees die.”

Conversely, the second point suggests that at least some people feel that self-reproducing populations may develop if enough are planted together, as stated on the reserve’s website: Home (dawnredwood.org). Otherwise, why call it a reserve? This further suggests that assuming that all Dawn Redwoods outside China are cultivated may not be best; it would potentially obscure self-reproduction. The reserve’s stewards note, “The location of the preserve must remain vague, at least for now, for obvious reasons. If people knew there were redwoods in the vicinity, they might search for giant trees, possibly trampling seedlings in their quest.” The Dawn Redwood observations in North Carolina do not appear to be in the reserve, but nevertheless, I hesitate to dismiss them, since they do indicate a gene pool adapted to North American conditions.

Just looking at previews on your first screenshot I see clear city-planted trees, so if you have time, mark them as so, not only because it would help native population, but just because they have to be marked (with check if place couldn’t be a spot for a self-seeded one). There’re so many trees/shrubs that must be marked and not only observer, but iders don’t mark them too, it’s insane.

I can almost understand why observers don mark them, they want iders to see them, but personally, I usually don’t observe those plants.

ill admit i do this sometimes, but they really need to mark it down after they get their ID. theres no reason to keep it research graded

There probably some that are self-seeded from cultivated plants, but the cultivated ones should certainly be marked as such. Not only will it help emphasize the native population, but it will show more easily the areas where this tree successfully reproduces outside of its native range, which could be interesting.

Also, it cuts down on misidentifications, because it’s less likely to be chosen as the ID when there aren’t a lot of RG observations for it nearby.

Cannot speak for other areas except to note that if Dawn Redwoods can self propagate here, they likely do that in other areas, too,

Indeed. I just went through Europe, and the observations in Ukraine were specifically notated as “self-seeding into a flower bed.” Those, I left as wild.

I’m not sure how useful it it to mark captive vs. wild. We know that there will be some errors in both directions. Researchers wanting to use these observations should be making that determination themselves–not relying on people who may be making incorrect decisions (or no decision at all because wild is default). I think ones time could be spent more wisely doing other things.

Just the fact that there’ll be mistakes doesn’t mean it’s not needed, there’re constant mistakes in ids, should we just stop iding? Captive and cultivated stuff shouldn’t be on the maps, should be automatically marked where it can, and it’s not even connected to any researchers of rare trees, it mainly helps iNat users.

I will continue to tidy up distibution maps, where I can. To discourage Seen Nearby suggestions for Wild, which are wrong and then perpetuate the mistakes. Supporting taxon specialists who HAD got it all sorted out …

Well, having now done North America, there were several which were self-seeded, and a few ambiguous enough to give them the benefit of the doubt.

Also did Asia, and for good measure, I then zoomed in to the portion of China where I expect the species to be native and looked at casual observations there. I pulled a few back from casual because what I saw in them led me to believe that their casual grade was erroneous.

And then there was this lone South African observation, which I left alone because the discussion as of yesterday was ambiguous. I see from today’s additions that it should probably be casual, too.

And that dawnredwood.org website mentioned that they thrive even when planted in swampy areas or standing water, also more like baldcypress than the other redwoods.

The self-seeded ones I noticed happened to be around a lake.

That one is definitely not swampy on the mountain slope. But it is in the wettest part of Cape Town. We are slowly reclaiming Table Mountain, from the forestry plantations, for our natural and wild fynbos.