The situation doesn’t seem to be the same for the android app and the website.

For the website: I find that in the mainland images as well as maps don’t load or load extremely slowly unless you jump the wall. Identify mode doesn’t seem to load any content and my personal feed is very slow but does eventually load (or is that just a cached version?). Other page elements seem to load. The GPS map alignment point seems valid though I usually enter location info manually anyway.

I have shown the app to local naturalists and they love the look of it but most mainlanders won’t be able to easily use it. I do support OSM or similar being added as that would certainly remove a barrier for app use. In terms of the website it seems that there could still be a barrier if the image loading issue is related to google hosting.

I use iNat with Tor Browser and it loads most of the time, although sometimes I need to change the circuit. Chinese users could also use it.

Fair enough, it’s not a small thing to do and it must be balanced against many other priorities.

Not complaining just wanted to add how things have changed here in recent months. I would say (personally) the situation here is getting more difficult. Often every few hours maps are unavailable (and sometimes other resources). With patience I can work around it but when time is tight it turns from an annoyance to a hindrance.

On the uploading observations side I’ve found pinning locations is helpful for commonly visited locations.

I would support it as a layer option, but I would not support a complete move over to OSM.

The satellite imagery what I use almost exclusively, and OSM doesn’t have that as an option. That in and ofitself is a complete deal killer for me.

The second issue I have with OSM is that while the information may be more accurate (not always, I’ve found that construction firms will sometimes place their planned projects into OSM long before they even have permission to break ground in an attempt to pre-justify the construction), I find the interface very ugly and extremely ‘busy’, which would make seeing pins and such messy.

The biggest issue is the lack of satellite imagery on OSM though. That’s absolutely vital to have, especially in the kinds of places I work where specific landforms and trees are the main way to identify a location.

Because of that lack I find OSM maps to be far less accurate than any system that uses a reasonably detailed satellite image.

No satellite imagery. Complete deal killer for me.

The satellite imagery what I use almost exclusively

Same! I can’t imagine how difficult it would be to manually add a location to an observation without the landmarks visible on a satellite map. I know nothing about OSM, so I was neutral on this suggestion until now, but if the change would remove the satellite imagery I thoroughly oppose it.

Me too, in the field I use topographic maps(on a tablet, not real paper anymore), with some imagery, but on iNat its satellite imagery, 98% of the time for me, especially as many of my observations are in ‘nowhere land’ (large patches of green), on google street maps.
I don’t use google ‘terrain’.

I would use OSM, if it where an option, but not on a regular basis.

Different story if I was in China, though.

As someone who has spent a lot of time both personally and professionally looking at GIS and web-hosting options, I think in general the use of Google Maps is better for some reasons I’ll lay out below, but that it cannot hurt to show a simple leaflet OSM map for users with a Chinese IP address.
but in general

Overall, I think Google is the easiest, best, most consistent and cheapest (since it’s free) option available. There would be no harm in allowing users to switch to an OSM-style leaflet map, but that would require a rebuilding of the mapping code to make it leaflet based and not Google based, and this probably isn’t worth it for the slight increase in map data that OSM provides in some regions. However it may be worth it to allow users in China to map without it being blocked, and in that case it might be quite easy to allow that option for users globally.

Hope this is a helpful overview for some people!
Cheers,
Nathan.

There’re more cons of Google, e.g. it shows so many places with wrong names, I was really surprised how wrong it is in that, the best map here is Yandex non-satellite which shows both correct names and all the roads/paths as they are and not how Google does it – randomly.

Since GoogleMaps provides free service to iNaturalist, I wouldn’t mind keeping it.
Having OSM as an additional layer to choose from would be nice though.

Getting OSM tiles in the Google Maps API V3 seems to be possible.
See https://wiki.openstreetmap.org/wiki/Google_Maps_Example

No I would prefer a style with contours

I only use it for maps and things like traffic, taxi, public transport, but not browser (though for sure need to start using it instead of Google), so can’t say, the option is there as far as I remember.

Very late to this discussion and not sure what I am about to say will even be any help, but here are just a few experiences I have with switching between Google Maps and various OSM maps

* Inclusion of a geocoding API. This allows users to search for locations in picking an observation’s location, and to get text names for the coordinates they have included. Google’s geocoding and reverse geocoding is far more robust than any popular alternatives. OSM’s is very rigid requiring a direct match to its database, whereas Google will return results for a much larger variety of inputs. Any third-party geocoding API will also be expensive for the number of requests I expect it gets per day.

Where is the GeoCoding api used ? Because thisone take a lot of clicks and zoom compared to others which are much much faster. You mention the biggest place in the neighboorhood and it goes/opens there (Bangkok, Melbourne, Java, Djakarta, Bali) 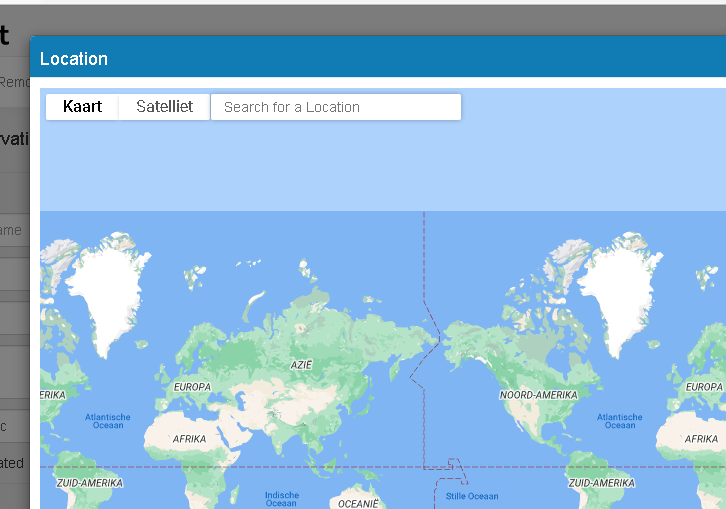 I have Huawei devices, one of a newer kind, where I cannot visualize maps in the iNat app (uploads work, but without geo references, those have to be added subsequently via the website) and one older device where Google maps still work.

Apart from iNat, I have been using the OSM+ app for many years, and there is satellite imagery which can be turned on and off. Most often I just use contours in the walking profile, but switching to satellite/hybrid view is a no-brainer. The nice thing is, OSM+ works on both old and new Huawei devices. And it is way more accurate than Google maps this side of the Atlantic.