Well, my reverse bipedalism thread sure mde for interesting discussion. Now another idea came to me: why exactly four limbs?

When I think of chordates, I think of two basic types. Some never evolved any limbs at all: sea squirts, lancelets, hagfishes, and lampreys. But then the other kind – starting with the sharks, they are already tetrapods; one pair of pectoral fins, one pair of pelvic fins. This pattern never varies from the sharks and rays, through the ray-finned fishes, and the terrestrial vertebrates. The pectoral fins became forelimbs and the pelvic fins became hindlimbs.

It didn’t go this way in the arthropods. Insects with six legs, arachnids with eight, decapods with ten, isopods with fourteen, and centipedes with as many pairs of legs as they have segments. So there is no set number of legs that comes with being an arthropod. Millipedes even have two pairs of legs on each segment, which seems very strange to me.

I could envison an alternate evolution: the notochord became a vertebral column, and each vertebra had its own pair of limbs. Then you would have a fish with as many pairs of fins as it had vertebrae. In turn that could lead to multilegged land vertebrates. Of course, loss of limbs from some vertebrae is possible; but that would lead to as much diversity in limb number as we see in the arthropods.

Is there some inherent reason why this couldn’t happen, or is the universal tetrapod template just an accident?

Apropos of nothing I’m currently reading a science fiction book where your alternate evolution is used for at least two species. Intelligent centipedes!
The book is Glorious, Gregory Benford and Larry Niven.

I think you answered yourself, it’s because we are chordates, not arthropods, builduing a pair of skeleton limbs out of every vertebra is not an efficient way of builduing a body, it would take a lot of resources to build them when clearly most species are good with 4-5 limbs, with some even going from 5 to 4 by loosing tail or not evolving a gripping tail. As body plan should be the best at minimum cost, we can suggest that having two pairs were enough. Likely there’s something like cox genes that predetermine that and maybe there was never a chance to get 6 limbs. But hand got from lots of fingers to 5, meaning 5 is really enough, with many species getting the number even lower. So, if there was a reson to get 6 legs, there likely would be if mutations allowed it to happen.
Then of course each pair of vetrebrate limbs need own carcass of other bones and tons of muscles to attach around, you need something like a snake in length to get it, and snakes are better off without any limbs at all.

Tetrapods are rare. Ballpark guess: about 2% of animals (by taxa) are tetrapods. The number is much lower if we go by number of individuals, much higher if we go by biomass.

We might instead ask: Why are all of the large land animals tetrapods? It’s probably just dumb luck. Above a certain size, being a land invertebrate just doesn’t work, at least under current conditions on Earth. So, to be large you have to be a vertebrate. Vertebrates happen to have evolved four limbs early on. With the exception of myriapods, the number of limbs is a “hard” thing to change. Myriapods have large numbers of legs that are almost all the same, on a large number of body segments that are almost all the same—changing the number of legs, or the number of body segments, does not make much difference to a myriapod.

Apart from the myriapods, the greater diversity of limb number in invertebrates is an illusion—we’re not comparing equivalent units. We decided to dump most of animal diversity in one bin, and a little bit of animal diversity in the other bin. The bigger bin has more diversity in it—in limb number as well as in everything else. Suppose we measured the rate at which limb number changes per reproductively isolated lineage per unit time. First, the number is for all practical purposes 0. Second, the number would not be noticeably higher in invertebrates than vertebrates. Third, almost all of the changes in limb number would be losses.

The rate at which limb number changes in lineages is basically 0 because the genes that control limb number and differentiation between limbs also control more or less everything else about the organism’s body plan. You can’t just tweak the number of limbs without also changing lots of other things. Somewhere in that grab-bag of other changes is almost always going to be something that’s simply lethal. The changes in limb number are almost always losses because that’s the easiest pathway to change limb number without lethal consequences. Reducing the number of limbs might happen by basically turning off a set of genes in one part of the body, which means those genes can still keep on doing whatever they’re doing in the rest of the body. If you’re increasing the number of limbs, that’s more likely to need some genetic changes that will interfere with other functions of those genes—the genes will need to be “doing something different”, to some extent, rather than just being turned off in one context.

There have been discussions on this topic for several decades. I remember reading something Steven J Gould wrote on the topic, although I can’t find it now.

Anyway, the common answer is that to have more than two pairs of functional limbs, a vertebrate would have to have them attached to the skeleton somewhere. We have two body segments with places for limbs to attach. In order for another limb-bearing segment to arise, we would need either a duplicated pelvis or a duplicated pectoral segment. A developmental mutation that caused duplication of either of these limbs would generally be fatal, and even if the individual survived to adulthood, would it successfully mate and reproduce with a partner that structurally different?

That said, there are vertebrates that effectively have more than four limbs. Prehensile tails. Elephants’ noses. Cephalic fins on manta rays. Snakes and that walk on their ribs.

And of course there are deleterious mutations that cause individuals to be born with one or more extra, generally useless limbs. A condition called polymelia.

I wonder if there is anything that grasps with its ears?

That said, there are vertebrates that effectively have more than four limbs. Prehensile tails. Elephants’ noses.

Is a four footed creature with a prehensile tail not just a tetrapod?

Exactly. But some tetrapods use their tails as limbs and some don’t.

I must confess I don’t know whether or not being able to grasp with a tail (or a trunk) means that appendage counts as a limb. In fact I’m not sure if either counts as ‘pedal’.

Jason, your portrayal of the variety of leg numbers and arrangements doesn’t seem at all baffling when considered in the long, long time-line of evolutionary sequences. Those characteristics can’t be arrayed in any simple linear way, but there are some pretty recognizable tendencies in leg numbers and form based on environment (aquatic vs terrestrial vs aerial), food/foraging mode, defense systems, movement and migration requirements, and the basic laws of physics.
By the way, a millipede in my yard commented to me the other day that we bipeds just look strange to him/her/it/they/them. ;-)

The term “canalization” (from my long ago college days; might not be used much today) always pops into my head when these questions come up. Early in vertebrate evolution, four limbs became the template, maybe for structural-functional reasons, and we’ve been stuck with that ever since. Evolution can modify those limbs for different functions (flippers, wings, etc.) and even turn off the genes that make one pair or both of them, but it can’t add extra limbs … at least not true limbs.

My guess is that the paired limbs at either end of the torso, with a bunch of important organs arranged in between, was optimal. No need for an extra set of limbs and no good place to put them and the associated skeletal components anyway. That’s my crude hypothesis.

Atelidae tail does everything a limb does. 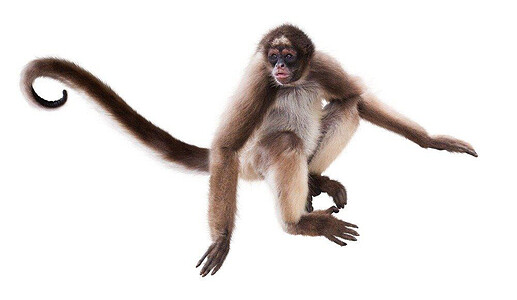 The term “canalization” (from my long ago college days; might not be used much today) always pops into my head when these questions come up.

An underappreciated concept that needs a better word, if you ask me. :-)

The Grand Canyon is canalized. A canal isn’t. A canal is specifically the structure you build in order to get water to go places that historical contingency prevents it from going otherwise. You build a canal to oppose canalization.

I could envison an alternate evolution: the notochord became a vertebral column, and each vertebra had its own pair of limbs. Then you would have a fish with as many pairs of fins as it had vertebrae. In turn that could lead to multilegged land vertebrates.

What fun images sprang to mind with multiple arms and legs evolved for specialized purposes. Maybe, this 16-limbed animal:

I imagine something very like a fainting goat. When startled, it falls over in a heap and then can’t figure out which legs to use to stand up again.

It does seem that vertebrates with more than four limbs would be theoretically possible. Personally, I wish we were six-limbed so we could have hands plus four legs for better stability. However . . .

Embryonic development is a very complex process. For tetrapods, that process was set more than 500 million years ago. For some reason or purely by chance, the process that worked involved producing four limbs. So many different genes are involved in making that body plan – genes for bony skeleton, body segmentation, muscle and nerve arrangements, pelvic and shoulder girdles, etc. Changing the number of limbs requires changing very basic, early steps in embryonic development. That can mess up a lot of traits “downstream,” much more likely to cause death than a new function. And changing just one or a few of these traits isn’t enough to make six function limbs, though mutations or developmental errors can produce extra limbs with limited function (e.g. google “6-legged calf”). Thus “canalization.” We see a wonderful diversity of changes “downstream” but not in the most basic traits. So it’s clear why we’re all tetrapods now, though the question of why the first tetrapod was tetrapod or why it had advantages over other alternatives present at the time is not clear.

The basic pattern for arthropods seems to be, one leg+gill per body segment. The leg+gill can be modified, segment by segment, to leg, gill, mouthparts, claspers to hold eggs, etc., or can be lost.

Atelidae tail does everything a limb does.

Except they can’t walk with it.

They can, they use it the same way kangaroos use their tail.