A storm is coming...a storm with feathers

If you’re in the Southeastern U.S, be sure to bar your windows and stock up on birdseed. The pine siskins are coming. Don’t say I didn’t warn you when you look outside and suddenly find that your entire yard is upholstered in barred grayish-tawny plumage with a splash of yellow.

How do you know this ?

A little bird told him?

If you google the Winter Finch Forecast ( don’t have the URL handy) you can see the predictions.

“A little bird told him.” Snort!

Having Googled Winter Finch Forcast, I now answer my own question in case anyone is interested. Because the wild ‘’food crops’’ in the birds’ normal range are below average, they will need to seek food elsewhere. Making it worse, spruce budworms outbreaks provided food for a particularly good breeding season for a couple of species.

Seen, a Storm of feathers

A conservative estimate of 500 Plain Mountain-Finch. And later looking at the picture frames it seems like a 1000 or more birds seen flocking together.

This large flock was likely driven by cold rain and sleeting weather.

The flock (super-flock ) was observed for about an hour. Binoculars and multiple pictures were used.

As far as possible we could not see other birds mixed into the flock.

Earlier in the day we saw two distant flocks - one of which was accentors.

Other members of this group are
@negi @rajkoranga and Samuel John.
This is the ebird checklist for the relevant observations 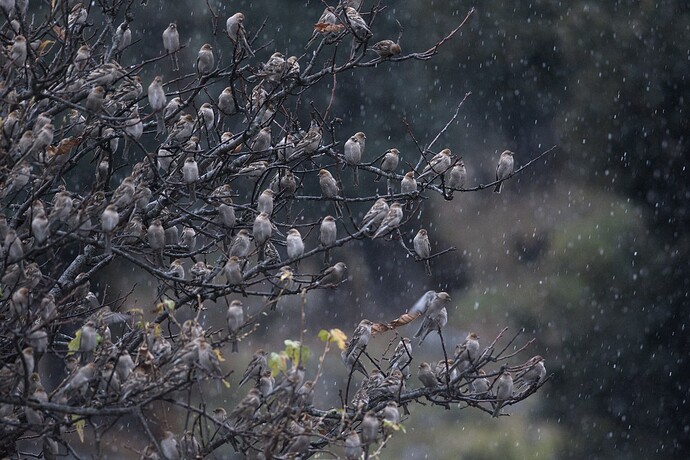 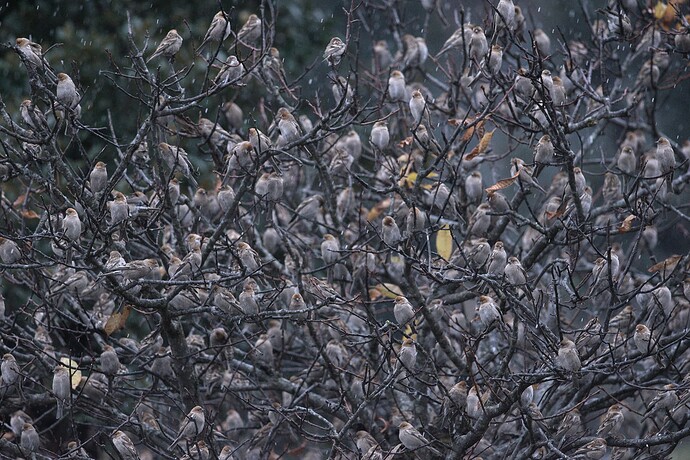 When will this storm arrive in the Southeast?

You reminded me to put out and fill my bird feeders, now that the deermice have been discouraged (permanently, I hope) from living in my house this winter.

Is this satire? Optimism? Realistic? I can’t tell.

From the winter finch forecast:

A large number of Pine Siskins will remain in the bumper spruce crop of western Canada this winter. In the eastern boreal forest, there are extensive pockets of heavy Eastern White Cedar crops which should hold small numbers of siskins this winter. However, most of the siskins remaining in the east this fall should move southward in search of food. At feeders, they prefer nyger seeds in silo feeders.

Granted, the finch forecast is about as accurate as the weather. I remember a year where no movement was forecast and it ended up being a crazy irruption year to the point that the forecast was changed with no trace of the old version. Not saying it’s not valuable, just saying predicting the future is difficult when it doesn’t always follow predictable patterns.

There was an incredible siskin movement a couple years back where huge flocks were everywhere, and birds were even migrating at night (they are usually diurnal). I think that was in August (in MA at least), and this year I have heard a few but not like that. I would think that if something big was going to happen down there, there’d be signs of it up here by now, but I’ll be happy to be proven wrong.

most of the siskins remaining in the east this fall should move southward in search of food.

This statement from the finch forecast seems to be in agreement with the OP’s original point. It’s been a very good November for Purple Finches and Pine Siskins where I am (North Georgia), and I know Evening Grosbeaks have been coming further south this year as well.

I saw that line and thought that it could be interpreted that way, I guess I sort of interpreted the paragraph as a whole as there won’t be huge numbers moving through. Most of the observations to this point both locally and with a little clicking around on eBird seem to be just 1’s or 2’s or small flocks. Hopefully these are just reconnaissance for a larger invasion.

Two years ago there was a cemetery surrounded by white pines that had huge cone crops and there were several hundred siskins milling around eating them. There were so many feeding at once that the wings of the seeds dropping made it look like it was snowing, it was amazing!

That was a good year indeed! That was the year I got my lifer Pine Siskins. I don’t think this year is predicted to be on the same scale as the 2020-2021 winter, but I think it will likely be better than average for southward sightings.

…folks, I’m gonna be honest with you, I was unaware of the existence of bird forecasts that could predict the timing and magnitude of migratory birds. I made this post because I did remember the last two winters our birdfeeders were just attacked by huge flocks of pine siskins and I assumed they’d be coming back to wreak havoc again. So yeah, please take this post as tongue-in-cheek and not a serious guess on migratory bird patterns

Ha! All good, almost makes it even funnier that it sparked a legitimate discussion.