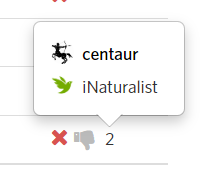 Just saw this while ID’ing

the moment I provided the ID of an non wild plants, this happened

For plants over a certain threshold of cultivated in an area, the system adds a downvote. I find it quite useful, because some users are inconsistent about marking garden plants. Yesterday, I marked a dozen pages of agave, creosote, sotol, ocotillo, and ornamental cholla in the Albuquerque metro.

If most observations of that taxon nearby are not wild, system automatically adds a vote, you can just vote against it if it is not a cultivated plant, but be sure it is.

I do not know what the system considered as “an area” but I hope it do not caused future problems with invasive species to nature reserves for example.

I think it’s levels equivalent to a US county or state, depending on the amount of data. That’s something @tiwane would know for sure.

Well the country i am active in is smaller than Michigan lake, so we will see. Interesting

I suspect “an area” is a geographical/ecological term. I live in Winnipeg Canada, and if I posted an observation of an African Violet, there is no chance it would live wild in this climate. Similarly, some moths are only found in the mountainous Western areas of Canada, so would not live where I live.
I have never encountered this, though, but I don’t post a very large number of observation.