We’re also owned by a cat . He has a real owner 2 doors away - defined as the person in whose name he is chipped, and who pays the vet bills.

We used to chase all cats away because we value the birds that come to the garden, but were besieged by the territorial leavings of every cat passing through trying to make our place their territory. (This is New Zealand where domestic cats are normally free to roam indoors and outdoors at will.) So we decided that we needed to befriend one and did so. What has been most interesting is that although he is a virulent bird-catcher, we have as many birds in the garden as we used to. I think the good part is that he is just one cat onsite instead of 5-6. And he also contributes by catching any mice or rats that turn up - usually before we even know there is one around.

For actual pets that we own - just a pond with goldfish and White Cloud Mountain minnows.

but that is generating an out of sight out of mind microplastic problem. Microplastic which is … in the air we breathe, the water we drink, the ‘pollen’ bees harvest, our food. Can cross the blood-brain barrier, and the placenta. Microplastic in the ocean provides a huge area to carry pharmaceuticals, agri-chemicals and disease. A tiny HUGE problem.

Altho if your garbage is burnt, only the air pollution and toxic sludge problem.

People are lazy. They get a dog and expect it to behave perfectly in crazy (to the dog!) environments with little to no training or exposure to said environment. The 1950s &60s saw an explosion of dogs as pets, continuing to this day, which caused this. Before then they were much more farm help, and working animals. Fast forward to today and dogs are part of the classic americana family and its expected to own one.

(Below is somewhat passionate, but a lot of info)

Pet homes didnt want the “craziness” of working dogs (only being driven mad by lack of work and stimulation, being tied up outside or backyard, and such) so then you get the explosion of pet dog reproducers* in it for the money angle - and now since 1990s and 2000s, creating “designer breeds”.

Lazy people + dogs bored out of their mind + not creating stable dogs but instead aiming for color or fur = a mess.

Theres a lot of awesome out there dont hear me wrong, but the entitled ignorant people who have dogs - and reproduce more dogs for profit - is a huge population subset and that creates issues.

Shelters that dont disclose bite history or behavioural issues (which is most of them sadly! This is actually a growing legal issue) giving an unsuspecting family or person far more than they can handle happens far too often too. This all creates chaos and is very new because, well, pre 1950s dogs were basically considered livestock, or for working purposes only, not pets.

Which is also very little time…your pet border collie has hundreds of years behind them working sheep, and you want it to be happy with a few walks now and then and wonder why its out of its mind and ya call it “neurotic” - whos the neurotic one really? Every breed has recent and long working history - but no one learns about that before getting their cute puppy. Yes your dauschund is gonna dig and tunnel and no you shouldnt and probably cant train that out. Why? Research what they were created for hundreds years ago.

But people want cute pets, to keep them in apartments or tied up in the yard when it annoys them, and give it basically no attention or stimulation; and still want the perfect-in-human-eyes behavior, able walking down a busy city street, show no signa of energy on a walk, be a Perfect Little Robot. Its not going to happen, its not fair to the dog, its not right in so many ways.

*I refuse to call such breeders, (ranty warning) because breeders will temperament match, heath check, these days that means OFA, genetics, thyroid pannel, and more, and none of this stuff or barely any does a reproducer creating for profit do because it costs a lot of money! Once litter is born a breeder will use ENS or Puppy Culture or similar to make sure they are being raised correctly - comfortable and stable in the human world as it is now. I have a huge rant on what a proper breeder is - and rescue too - because a lot of reacues are pretty shit as well (ex, regional herding dog rescue that buys from puppy mills and auctions because they cant keep up with the demand for the cute rescue pups - fueling the very worst of reproducers! But they get a pretty penny markup…)

I thought maybe Pugs are an exception to being bread as a working dog?

There were many breeds that appeared as lap dogs, but pugs looked like normal dogs just a century ago.

Yes your dauschund is gonna dig and tunnel and no you shouldnt and probably cant train that out. Why? Research what they were created for hundreds years ago.

Exactly! That’s what I meant about dog training blogs reading like they were written by control freaks – they want to train all the dogginess out of a dog. To the point that they are usually opposed to off-leash dog parks (not controlled enough).

Honestly, I have never been a dog person, never had any plans to have a dog. But when I found those abandoned pups at the West Research Campus, something came over me. With no idea of his parentage, I had Caspian DNA tested. Genetic markers for four widely disparate breeds were found, but the results also said that there was no evidence of a purebred parent or grandparent. Caspian and I had fun, though – to the best of my ability, I gave him opportunities to just be a dog, even if that meant sometimes going places where we wouldn’t be seen.

Did he chase deer? Of course he did. Did I feel bad about it? Not really, because in the absence of their natural predators, deer are overpopulated; if the occasional deer he came across died from the stress of being chased, how is that worse (population wise) than if it had been preyed on by a wolf or a cougar?

But people want cute pets, to keep them in apartments or tied up in the yard when it annoys them, and give it basically no attention or stimulation; and still want the perfect-in-human-eyes behavior, able walking down a busy city street, show no signa of energy on a walk, be a Perfect Little Robot. Its not going to happen, its not fair to the dog, its not right in so many ways.

But alter this paragraph so that it refers to cats, and you’ll get the thread shut down.

3 cats and multiple snakes, lizards, turtles, tortoises and fish. I used to have dogs but one of the older cats who was raised with dogs doesn’t like dogs that were not hers. And the last one passed a few years ago and she refuses to let a dog in this house. Her and her sister were found in a car engine compartment 16 years ago when they were 4 wks. The third cat (called Dead Cat) was brought to me when I was an animal control officer basically dead. The vet said they could save her when I took her to be euthanized and a year of medications meant I got attached.

I am gone for 48 hours at a time with my job and the girls are just fine during that time. Clean litter boxes, full food and water dish (even though they still drink out of a turtle tank). A dog couldn’t do that, even though I do like dogs too, they are a lot more work. And they are indoor only. The do have an outdoor catio that is fully enclosed so on nice days they can sit out there, but they cannot free roam.

Exactly! That’s what I meant about dog training blogs reading like they were written by control freaks – they want to train all the dogginess out of a dog.

The new wave of dog training combats this (which really started in the 80’s but good training doesn’t make good TV so that has hurt a lot of forward movement).

People forget: Behaviour inherently is neither good nor bad, it is simply communication. For across species, it is often the only form of communication. So you’d better be listening!

If you don’t give your dog (or any animal really!) appropriate outlets for its needs, it will invent them - and you may not like what it invents! Look for what they enjoy, and have drive for, and invest in activities that utiilise those desires. Typically…most of ‘training problems’ completely stop if you consider an animal as an individual and meet their needs - not just i fed and watered them - but actual needs. And with how much dogs live in human world, they need taught how to ‘human’ - not forced, not coerced, not punished, simply taught. Foundation is simply life (including training!) is always safe and fun. If not, you really don’t get anywhere good.

(As an aside, look for trainers certified with IAABC - international association of animal behaviour consultants which also covers cats, dogs, horses, and birds, or through CPDT - certified professional dog trainer, which is dog only. Both these are international programs/standards)

Shelters that dont disclose bite history or behavioural issues (which is most of them sadly! This is actually a growing legal issue) giving an unsuspecting family or person far more than they can handle happens far too often too.

We adopted an old dog (mostly-GSD) last friday from the local shelter and one thing I appreciated the hell out of was that they did disclose and had restrictions on households for probably 1/4th their dogs (no other dogs, or no kids, or no cats or no apartments). They disclose that stuff which made me a lot more willing to adopt a dog there.

I think if the animal’s personality can be inferred from appearances, it’s an unwise choice for an avatar image.

Ahem - what shall we infer from a red and white pattern for you? Dental floss is also difficult to ‘talk’ to.

Dental floss is also difficult to ‘talk’ to.

I read it as referring to a beach, and the swimwear thereon.

If the picture wasn’t more than ten years out of date, I could have used this one: 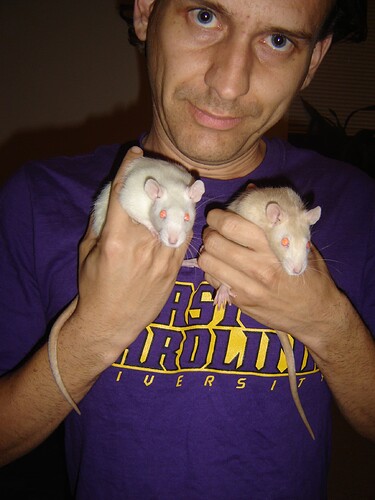 Oh no, I never even considered the butt floss association.
It was a very random stringing words together - I was driving around Massachusetts and amused at -bay as a suffix for places, and hunting for something that would be convincingly unique.
The red and white squares are a bit of cellular automata generated pattern - I made a quilt using that pattern once.

I was the right age to be very connected (and an early adopter on many services) as a young adult, and to bake my legal name into a lot of account names. Then I came out as transgender and the personal branding all got messy and I regretted my choices. It was never visible to me what my true name should be, so five years in I’m still trying to introduce myself without stumbling over it.

I will hold your quilt in mind in future