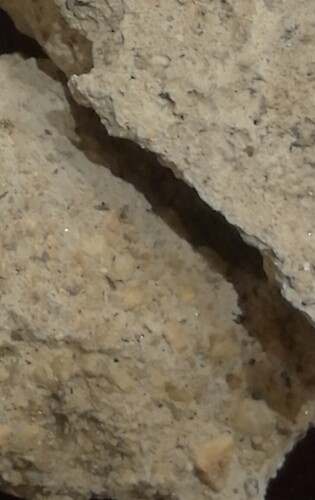 But I am attempting to culture epiphytic cryptogams for iNat purposes and have acquired some rough-textured concrete for the task. And, well, it’s rather dirty. How would I best sanitize it besides water? I’ve considered soaking it in isopropyl alcohol but am worried that it will chemically react and cause cryptogam-harming chemicals to leach out; unfortunately I am not a chemist and could not find any information on whether the two react.

I don’t remember a whole lot of college chemistry, and I have zero experience with culturing non-vascular plants or lichens. But… if you feel it’s necessary to sanitize your substrate, then it would seem that isopropyl alcohol (aka isopropanol or IPA) might be one reasonable approach.

IPA is a volatile organic solvent and AFAIK isn’t likely to react a lot with any of the cement components in concrete. In fact, here’s a paper that examines using IPA to dry small concrete samples in preparation for microscopy and similar analysis.

My concern with using IPA to sanitize concrete lumps larger than a pebble would be that it could take a very long time for the absorbed IPA to fully evaporate. If you started growing your cryptogams while IPA was still being released from the interior of the block, most likely you would kill the organisms you’re trying to grow.

An alternative might be to heat your blocks in order to sterilize them. I have no experience with heat sterilization, but based on soil sterilization guidance it seems that heating them to about 180 C for at least 30 mins would be recommended. Higher temperatures have a risk of creating phytotoxic compounds. You could sterilize your blocks on an old baking sheet in a kitchen oven. Use an oven thermometer to be sure you’re getting the temperature you need and increase the time sufficiently for the heat to penetrate the center of thicker blocks.

Just in case it’s not obvious, I should probably state that you absolutely should avoid using the heat treatment approach on anything that you have previously treated with (flammable) IPA. And your heated blocks will likely stay hot for a long time after you remove them, so plan to put them somewhere inaccessible once they come out of the oven.

[Edited to add the following…] I do wonder how well your concrete blocks will work for the organisms you intend to culture. If they’re lime-tolerant then they might be a good choice; if not, then the high calcium levels inherent to the concrete could be a bigger obstacle than anything you’re going to create by trying to sanitize the blocks.

I’ll be interested to read others’ thoughts on this!

Concrete is mostly calcium salts derived from calcium oxides and specifically calcium hydroxide (a base). Typical cleaning is to etch the concrete with hydrochloric acid yielding chloride salts that are easily washed away and the acid is a dissolved gas that dissipates over time. This will not leave residue when fully rinsed. Why do you not want to use water?

An ultimate way to “clean” a surface of contaminating debris is to sandblast it - a local dental lab might be able to help with clean (unrecycled) blasting material if your blocks a relatively small. Doing this to concrete would strip a layer off the surface. This would treat the irregular surfaces that are present - however it would not go into off-angle micro-fissures - but following treatment with water if it is non-reactant would wash off the debris from blasting, heat sterilization would evaporate the water and hopefully kill any remaining subsurface project pathogens - if you have connections with a dental office and the blocks are a manageable size, they may be willing to help you with sterilizing the blocks. Disclaimer - All this is a totally unscientifically proven suggestion - one could probably design a paper around what the best approach is.

Oh don’t worry about the high calcium levels, my target lichens/mosses for this project are all calciphilous spp. found naturally on bricks and mortar.

I never said I didn’t want to use water, did I?

Is that mud / sand - which you could brush and hose off?
Or chemical contamination?
Or does it need disinfecting from organic contamination?

To be clear: the concrete is a few small “rocks” from a grimy industrial area. So a combination of chemical and microbial contamination, I would say. I also plan to give the whole thing a thorough rinsing with water in addition to doing other stuff, by the way.

It was implied by

How would I best sanitize it besides water?

Yes, I am aware it could be interpreted that way, but I did not objectively say so. I am familiar with various water-based methods such as pressure rinsing and thus wanted to hear about water-unrelated methods, which I am less familiar with.

Some/most? dental labs would also be able to steam clean it after sandblasting - that would also have a de-greasing/de-oiling result.

Pardon me if I seem clueless. Why does the concrete need to be sterilized to grow the organisms? Would they not do just as well as is? If you do need to sterilize it, how thick is it? It may affect heat sterilization. Would a bleach wash followed by a water rinse do the trick? I’m just spitballing here, since I don’t really know what you are trying to accomplish. Not a criticism, but ignorance on my part.

Urban soil here tends to smell very rank and burst into moldy horribleness for no reason, even when well-ventilated and not overwatered. I’m pretty scared my grimy urban concrete will do the same.

I don’t know how relevant it is to this situation, but when I worked in a winery we had shifted over to using non-toxic cleaners as much as possible and cleaned our equipment and floors with sodium percarbonate (that’s basically the active ingredient in those “oxy-cleaners” and is like sodium bicarbonate on steroids) scrub followed by a rinse, a brief wash with citric acid (to neutralize any remaining sodium percarbonate) and a final rinse. We would also pressure wash the cement as the occasion called for it, but that can be destructive to cement depending on how it’s made and what shape it’s in.

I think just washing and soaking for a few hours in plain water (or dropping them in boiling water), followed by the heat treatment suggested by @rupertclayton to boil off the water, should do the trick. I would suggest heating gradually to avoid creating any sudden steam pockets that might cause a piece to explode.