When you make an identification at the family level for something that has an incorrect species identification and say “it is Cidae, but definitely not Aus bus”, then any subsequent IDs don’t take it lower down (even though they’re in the same family). Instead they are also taken to conflict with the family-level ID, so the taxon is stuck at that level until it’s withdrawn. See this observation for an example.

Worse, if the original species-level ID isn’t withdrawn, then withdrawing the subsequent family-level ID means also withdrawing the disagreement with that species, as in this observation, which means it appears to have two equally valid species IDs.

This arguably should go in bug reports, but perhaps it was intentionally designed that way (though I can’t conceive of why).

It’s a known part of iNat design, parental disagreeings come when you disagree using a high level taxon, so you need to keep up with notifications and withdraw when needed.

iNat doesn’t play nicely with us. I have learnt to see where my ID takes the CID - and then react accordingly to push iNat to show a useful CID.

My bird plus your ssp = Aves to iNat! Not helpful. I withdrew to force iNat to show birders the ssp to engage with.

Or the jumps straight from Plantae to Research Grade ssp without passing go - if I add a supporting ssp ID and comment.

I find a workaround to make iNat do what I expect it to. Between ancestor disagreement and we can use var / ssp but iNat will punish us for doing so.

(Ducks out of sight … haven’t had any complaints so far …)

It’s extra effort for disagreeing, but when I can, I try to force the system to say exactly what my disagreement counts as. If it’s two people agreeing that it’s the sound of an American toad trilling, but I know it’s a cricket, my first step is to put in a disagreeing ID at Chordate. Then, when the cricket ID is placed, it shows what it would actually counts as anyway, disagreeing with Chordate and not just for American toad. I then delete the incorrect Chordate and since that action unfollows and unreviews, I follow and review after.

It was probably accidental when I first saw it on someone else’s ID, but I couldn’t unsee it and now it feels wrong not to add that bit of accuracy that I had always wished was there, even if it’s extra work, is generally missed, and might get me in trouble.

I don’t understand this. Why not just add an ID of cricket, which implicitly disagrees that it’s a chordate?

You just say you’re adding false ids, while adding id even of an insect and then withdrawing it is not any different from what you describe. For insect obs it doesn’t matter at all if disgreement is with chordates or specific toad, it only matters for taxa that are parental to the correct id, e.g. something is ided as specific scorpionfly, someone adds an id of insecta, then someone adds a beetle id. Insecta id is in disagreement with beetle, because it disagrees with Pterygota.

Discussion around the issue of ancestral conflict and how it has an outsized impact in the algorithm :
https://forum.inaturalist.org/t/community-taxon-algorithm-tweaks/28583

If it is a RG observation of an American Toad and I directly place an ID of Cricket, it will display as “…disagrees this is American Toad,” but it will count as not only disagreeing with American Toad, but all chordates. I find this incredibly confusing and I think there are many people who continue to be ignorant of how the system works because of it. I just want that to say exactly what it means. When I’m done, that line is the only difference.

As it should be if it’s a cricket.

The first is from an old ID, the others are more recent. To the system, the first two mean the same. I doubt most users read them the same. 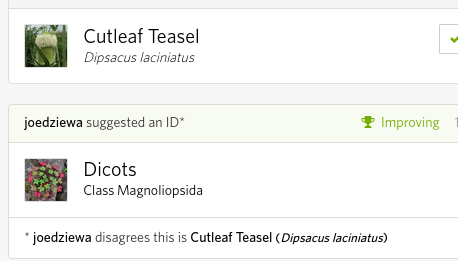 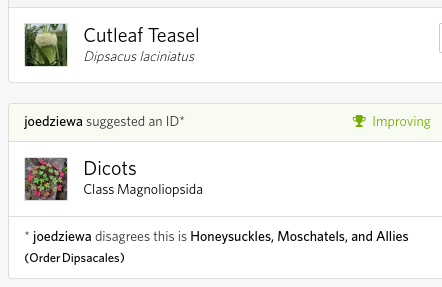 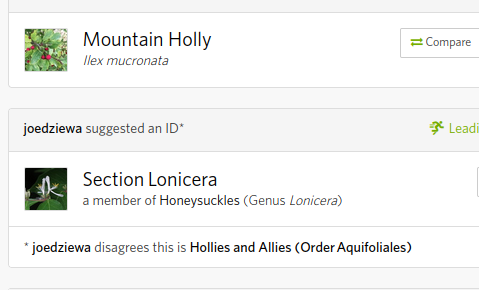 iNat only permits us to actively disagree. We must say it is … not that.
We cannot say what we want to - it is not that. End of.

I often see comments, definitely not … but I don’t know what it is. Then we get disagreement at a broad ID, which becomes much harder to shift.

Got it, thanks for the examples!