Now that I have been putting considerably more effort into identifying my Gastropods (got tired of very different species all having the same ID), I find this taxonomic tree: 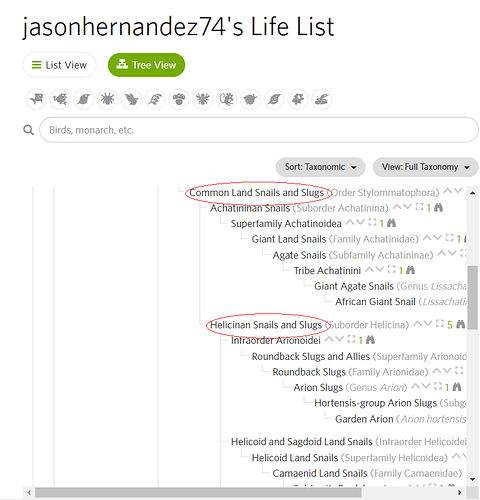 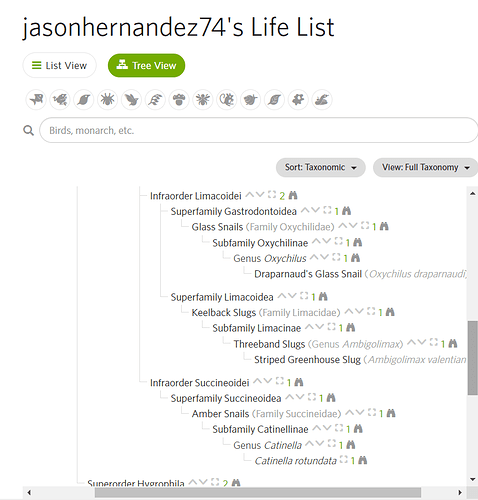 image804×840 69.3 KB
This would explain why you cannot even identify a slug broadly as “Slugs,” but have to leave it at “Gastropods” if you don’t know a finer taxon. “Slugs” are not a taxon; they represent multiple lineages of snails which independently lost their shells.

There are still other lineages doing this today. The Succineoidei, or Amber Snails, have paper-thin, easily broken shells which provide no protection from predators; presumably, they have more to do with protection against dessication. My observation from this family, Catinella rotundata, is even further along the road from snail to slug, as its shell is too small to protect against either predators or dessication, and may be considered vestigial.

It looks like we have a similar theme to that of my earlier thread, How many times will lizards become “snakes”?: just as losing limbs is a “lizard” thing to do, so, it would seem, losing the shell is a “snail” thing to do. But what selective pressures could drive the loss of protection for such slow-moving, soft-bodied animals?

You leave us off with the most fascinating question. I know virtually nothing about snails and slugs, but the thought that immediately comes to mind is that the chemical (or other) defenses of slugs are sufficient in an evolutionary sense that they make the physiological “expense” of a shell superfluous. Creating a shell has energetic and biochemical costs to an individual organism. If other defenses against predation pressure (and dessication issues) have developed over eons, that could obviate the need for the shell. Then those mutations which minimize the energy put into development of the shell or those in which the shell simply doesn’t develop can have an ever-so-slight reproductive advantage. Over many generations, voilá, the shell is gone.

Yes this is an interesting observation! One slug in your list (Ambigolimax) even has an internal shell.

Creating a shell has energetic and biochemical costs

And shells don’t just require energy for production, they also require energy to be transported around. If I’m remembering correctly, this is why marine shells are denser than terrestrial gastropod shells: the water supports the weight of the shell more.

I haven’t heard a definitive explanation why the shell has been lost so many times, but in addition to the preceding hypotheses I might add that gastropods love moist conditions. They are often squeezed into cracks, so it may be that they can fit into smaller crevices without a shell.

losing the shell is a “snail” thing to do

I’d be careful in saying this, because it may be the other way around: there are probably groups that have regained the shell after losing it.

As a related note, it’s fascinating how many times gastropods have invaded terrestrial or freshwater systems from the ocean. Some went straight to one or the other, others went from ocean to land to freshwater, and some have made it back to the ocean again!