Do birds that fly higher have bigger nostrils?

The bird than can fly the highest, the Ruppels griffon vulture, has pretty big nostrils, here is a picture I found of its head and beak. https://kidszoo.org/wp-content/uploads/2015/02/ruppellsvulture_tn.jpg
Does this mean birds that fly higher have bigger nostrils to collect more oxygen in the sky?
Even tho i am not sure, I would think that it is the structure of the nose that might make it collect more oxygen, instead of the size. Do extra or bigger air sacs make a bird collect more oxygen?

I can’t speak to the nostrils specifically, but Rüppell’s Griffons and Bar-headed Geese have mutations in their DNA that allow the hemoglobin in their blood to take up more oxygen. I haven’t read through them fully, but here are a couple links to papers you might be interested in reading:

This is about humans, but I think it may be relevant: https://bigthink.com/hard-science/the-climate-your-ancestors-came-from-shaped-your-nose/

I have never heard anything specifically about nostrils and flight, and I’m certainly not the most educated person on living birds, but I can’t find a specific pattern with nostrils.
I think it’s hard to define “large” nostril, to me Gyps ruppellii’s actually looks quite narrow, compared to other Accipitriformes, like Haliaeetus albicilla. 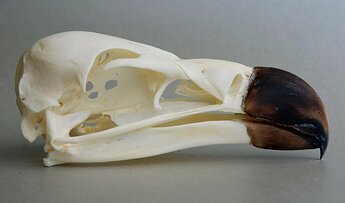 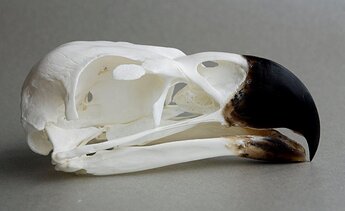 haliaeetusalbicilla_s1200×735 84.6 KB
I see at first glance on this list (https://www.worldatlas.com/articles/highest-flying-birds.html) common crane makes the list, and they have massive nostrils:

But Pyrrhocorax graculus and Cygnus cygnus are also on the list, and I wouldn’t describe their nostrils are particularly large either. 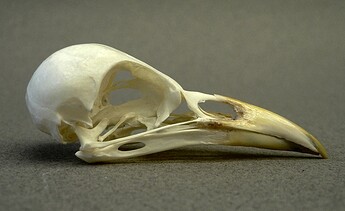 However, when it comes to your question about air sacs, I know for birds who fly for long periods of time, they have bigger air storage in their larger bones, like humeri, and other flight bones like the ulna and radius. From Lee Post’s The Bird Building Book, “Most of the bigger bird bones are hollow and filled with air that enters from the lungs through holes in the bone called pneumatic foramen. The storage space inside the bones is tied into the respiratory system.”
Very short distance fliers, like landfowl, have very short humeri, while pelicans have massive humeri, essentially the length of my own! I wish I had references for all these listed species humeri, sadly I am not so lucky.
I assume high flying presents different challenges than long distance though, as the atmosphere changes with height. Waterfowl, cranes, and Accipitriformes do tend to have larger humeri, and therefore larger air storage capacity. Perching birds however do not and Pyrrhocorax graculus is listed as a high flier. So although all of these high fliers would store extra air in their larger bones to some extent, it doesn’t seem to be a cohesive common thread. The mutations mentioned above probably affect bird’s ability to fly higher more the nasal size or air storage capacity.

I actually just discussed this in my A&P class this morning!

A cool result. In this case, it’s not the oxygen content that matters, but conditioning the air en route to the lungs, so humans in colder, drier climates have narrower noses than humans in warmer, more humid ones. Not sure how that would relate to birds, but air at high altitudes would like be very cold and dry, so they’d need a way to warm and humidify it on intake to avoid damaging lung tissues.

I’d guess that the vulture’s big nostril is more related to detecting food in high altitudes instead of oxygen things.

Albatrosses have pretty cool nostrils, and apparently (according to Wikipedia) they’re used to help the bird measure its airspeed. As far as I know they don’t fly particularly high, but they do fly a lot.

Old World vultures look for food mostly by sight though

I dont think anything is related to the size of the nostril,because even if it is a big nostril or a small nostril,the size of the lungs remain exact for the particular specie. Sometimes birds gulp air, deriving oxygen to fuel their hard-working muscles,but they may suffer from Hypoxia. Or other than nostrils it can also be their blood content,like we have hemoglobin.

I’ve nothing but an opinion on this.
I find it difficult to place ability of high altitude flight on nostril size when Mallard is listed in the top ten (although the placements vary by source).

How likely is it that the highest reported birds are actually the birds able to fly the highest?

And what about the migratory butterflies?

Nostrils’ size doesn’t correlate with things like that, bigger ones actually can be a downside for you (bird) in those circumstances.