Does iNaturalist change the location of an observation made in a wild field if a building is built on that field?

I have several observations made in 2017 in a field, a young urban wooded area, which have all changed location since a building was built there… It’s normal ?

Thank you so much !

That’s normal – there’s no need to change the location. That’s why we include the date and time with observations – they record what was there at that time.
It is common for herbaria to have dried plant specimens that are decades or even hundreds of years old, so what was there at the time has very often changed in the current day. It is still very useful to know what organisms were in an area in the past and what habitat types they like. It could help us make decisions about where to look for them now or what habitats we might aim for when doing environmental restoration.

do you have an example of an observation that you think was moved? when do you think it moved? and what was the original location?

I’m confused. Did you change the location or do you think iNat did?

My observations on the grounds of the hospital have all changed location, since the construction of an annex to the hospital. I do not know when. I observe a lot in places that will disappear, for the archives. It would be good for my rentals to stay in the right places, to know that before the building there was nature. 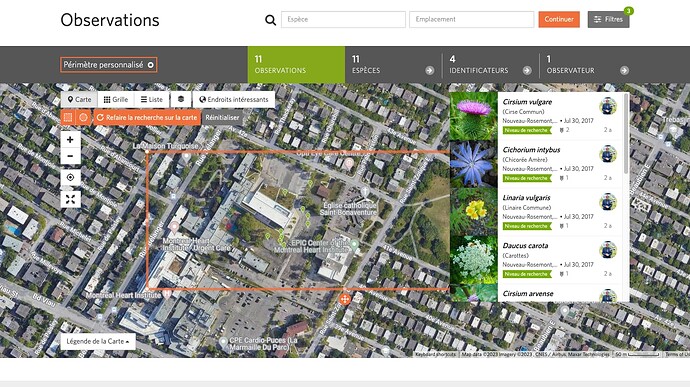 Excuse me, it’s very difficult to express myself in English with such a specific subject. My text is probably badly written.

I understand. If I understand correctly what you have said above @swampster is correct. As best as I am aware iNat’s AI is not capable of making changes to data based on newly constructed buildings or railways. All of your observations should remain at their initial locations without your needing to change anything.

i looked at the first observation from your set of 11 above (of Cirsium vulgare), which you said now has the “correct” location, and i compared this to the copy of this observation in GBIF, which would reflect the location prior to your changes today.

then i mapped these two locations just to visualize the situation a little better (A=“correct”, B=“wrong”). to me, the 2 points don’t seem that far off: 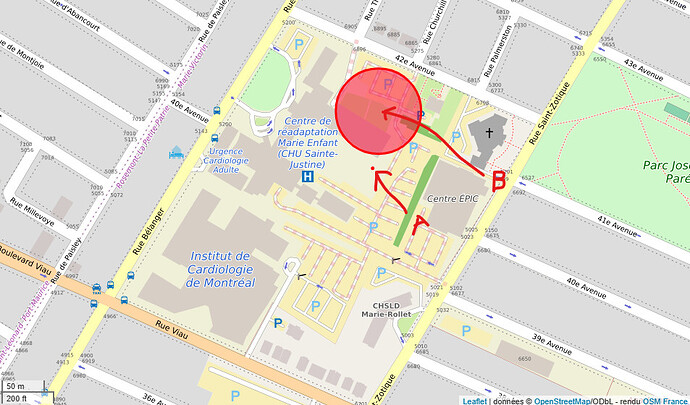 since there are no GPS coordinates captured in the photo page metadata, and since the observation appears to have been created via the web (not via app), i assume that you must have placed the location manually.

this suggests to me that maybe you just placed the location in the wrong location originally, or maybe you didn’t zoom in far enough into the map, and you placed it with a little less precision than you did today. or it’s possible that the version of the satellite image that you used was shifted slightly vs the version of the satellite map today (which is known to happen), or something like that.

in other words, nothing here suggests to me that the system or anyone other than you “moved” the location of the observation.

As to manually changing a location when the environment has changed.
Remember your observation is a record of what was where and when.
The fact that it may have been recorded on a site, but due to development or natural phenomenon is no longer located there is also valuable to science.

If the location was correct at the time, leave it, and if you want to you can add a comment stipulating that construction has taken place and wiped out the local population.