I’ve been using DALL·E 2 to create botanical specimens. Would it interfere with iNaturalist’s algorithm if I uploaded these to iNaturalist? Of course, I wouldn’t complete any uploads as recorded observations, but I’d be interested to see iNaturalist’s species suggestions.

I’ve been using DALL·E 2 to create botanical specimens. Would it interfere with iNaturalist’s algorithm if I uploaded these to iNaturalist? Of course, I wouldn’t complete any uploads as recorded observations, but I’d be interested to see iNaturalist’s species suggestions.

EDIT: To be clear, I do not intend to submit these images as observations. I have been using iNaturalist for several years, and would never falsify any of my records.

What I’m asking is whether it would be appropriate to use iNaturalist to try to identify the plant forms created by the AI. Does iNaturalist’s algorithm learn from our images? Would uploading AI-generated images to view the suggested species interfere with the algorithm? 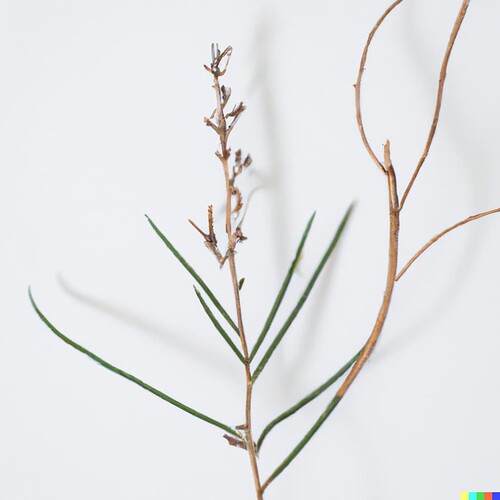 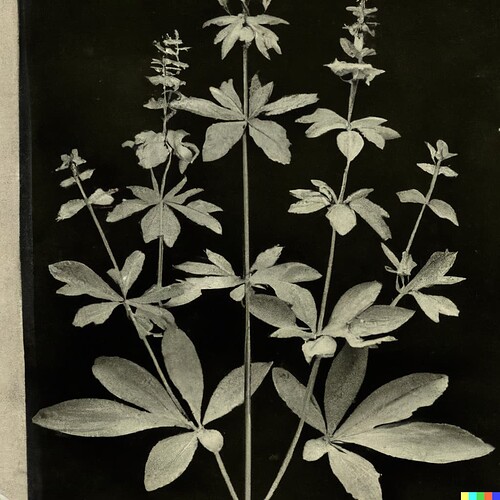 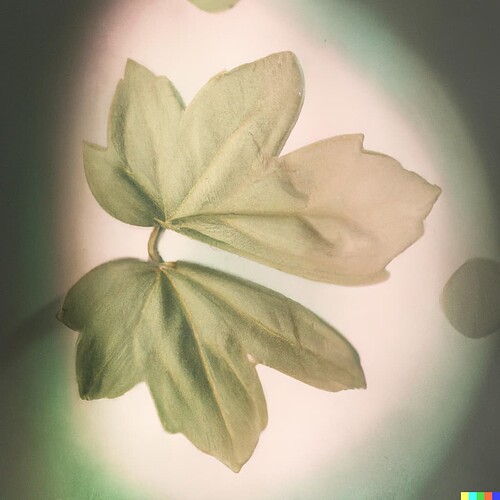 I do not think it’s a good idea to upload them, as they do not represent an encounter with nature.

If you want to test how they do with the CV, perhaps try this demo?
https://www.inaturalist.org/computer_vision_demo

I wouldn’t complete any uploads as recorded observations, but I’d be interested to see iNaturalist’s species suggestions

If you don’t finish the upload process and only select these images to see what the CV says, I don’t think that impacts anybody or anything, so that should be fine to do.

It’s a really neat concept. I actually tried to see what the CV thinks for the first one and based on my location in Idaho the CV suggested it’s a northern shrike. A bit off. Without location, it suggested the genus Haloxylon, which actually looks pretty close. None of the suggestions were confident, which makes sense considering it’s probably really confused looking at this since it isn’t something it’s ever seen before. I think it’s harmless so long as you don’t upload. And if it isn’t harmless, oops, because I did it already.

Coincidentally I was playing around with Stable Diffusion (another terribly clever ML model similar to Dall-E) yesterday evening. I asked for a giant ginger Maine Coon on a Roger Dean landscape, and this was one of its offerings. Truly epic, I reckon. 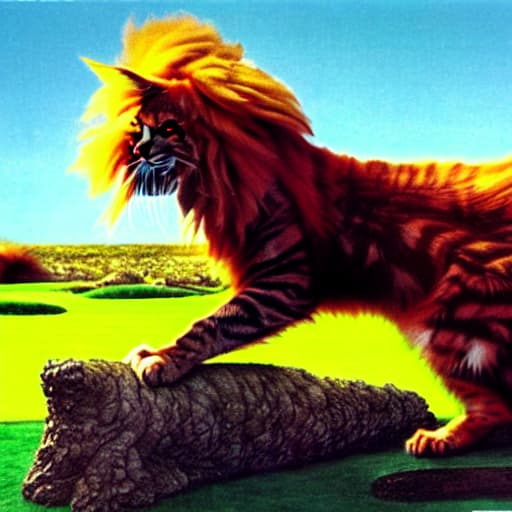 I say we let the AIs fight

(not paying attention to the whorled leaves) in the 2nd picture the upper opposite leaves of the AI created plant kinda remind me of Ajuga reptans - just a feeling, I wonder if that’s what it based them on! Also on the 2nd stem from right to left it also looks like the AI is attempting to draw flowers? Interesting.

Thank you for attaching this link! As I said in my post, I would not complete these uploads as observations. But I’d like to go as far as the first step: uploading an AI-generated image to see what species iNaturalist suggests. I’ll give the computer vision demo a try!

Thanks, it’s a concept I’m working on for an upcoming art exhibition! I got the same suggestion when I tried classifying the first image. It’s probably a good thing that the suggestions aren’t confident!

It does resemble Ajuga reptans, doesn’t it? My prompts used the terms botanical or plants or flowers, rather than naming any particular species, but it is interesting that it created something that looks a plant we can recognise with our own eyes!

I think what is making this confusing to me (and I think a couple others here) is your wording. Most of us consider “upload” to mean actually making an observation, whereas I think you’re just using to mean bringing the image into the batch uploader, which is fine. Just don’t click the green submit button if you’re using the uploader. Using the CV demo is a good idea.

As you have said, as long as you don’t complete the upload, I think it’s perfectly fine. I often get asked by people (friends, non-iNat users) to identify something or other and if I don’t know what it is, I sometimes upload the pic to the stage of being able to use the AI to get a good hint (or correct ID!) so I can give a suggestion, but I don’t complete the process and fully upload them as my own observations of course. There are really 2 uploads in the case of observations - one to bring the picture from my computer to the screen for entry of all the details and ID suggestions, and then the upload to make it a full-fledged observation. As long as you stick with the first stage only, I say go for it!

Upload, as in uploading the image file, checking the species suggestions, but not going as far as to submit it as an observation. The word upload is in common usage across the web. Perhaps input would be the more precise word for iNaturalist.

Yes, I would absolutely stick to the first stage! I’m just not sure whether running fake species through the computer vision model would affect the algorithm, particularly if it learns from us over time.

If you don’t finish the upload process and only select these images to see what the CV says, I don’t think that impacts anybody or anything, so that should be fine to do.

I often do this for people who don’t have an inat account but still want something identified. I prefer inat CVS to google lens.

My kids do that a lot, too. A lot of the time with random stuff that’s not even alive because they think it’s funny.

Only a few days ago, saw this incident

An A.I.-Generated Picture Won an Art Prize. Artists Aren’t Happy. “I won, and I didn’t break any rules,” the artwork’s creator says.

Then a day ago someone showed me Dall-E’s outputs. Only now is the extent of AI settling in my mind, of course knowledge of deep fakes has been around for a while.

Truthfully it is extremely scary, we live in an age of disinformation and information overload. Knowing what is “the truth” is going to be, I think, the next “innovation” and possibly critical for sane survival.

I am not sure where we are heading and what the impact will be - many things will become easier - but the same tools are already being used by the 1% to manipulate and misinform. Can the others (non 1%) ever be on the same level to know what is true.

I don’t know, I am just loud thinking – where are we headed ?

Only now is the extent of AI settling in my mind, of course knowledge of deep fakes has been around for a while.

I wonder about that. This thread inspired me to play around with some of those AI art generators. Some of them can produce human figures with real-looking faces. That got me wondering: that boy in the picture doesn’t actually exist; he is entirely computer generated; but if you cropped that picture to just his face and ran a “Google lens” type of search with it, would it find people who could be mistaken for him? Do AIs generate pictures that can be identified as actual people?

Of course, I wouldn’t complete any uploads as recorded observations

If someone unethical were to do that, how long could they get away with it? Some of the AI art generators have the option to use your generated picture as the basis for a set of NFTs; then you’d have a whole series of fake observations of the same or related “species.”

P.S. – your first picture, the one with the needle-like leaves, Edge’s “visual search” suggests the following possibilities:

… to name just the top nine.

I think this is a really interesting idea (with the caveat others pointed out that you shouldnt save them as real observations). I am guessing since the iNat algorithm specializes in organisms it would do better with them than dall-e but who knows. I tried putting some specific sedge species into dall-e at one point, curious if it would have diagnostic features, but it was just generic sedge looking things

It would depend on when such “learning” takes place. I presume, in iNat, this only happens after an image is submitted as an observation.

In addition, if I remember correctly from previous discussions, the CV doesn’t “learn” in quite this fashion. But I forget the specific method for how this works. And, to further muddy things, such methods change over time and the last time I read posts on this topic was a few years ago.

As others have mentioned, I do image uploads without submitting, on a regular basis, to check an ID, either for myself or for friends/family.