We have 10 chickens (4 pekin bantams and 6 silkies) and crows are constantly going in their coups and taking food when we see them we shout and that scares them off.how can i stop them coming?

You should probably have a predator-proof coop and run, in order to stop the crows, and worse things. Hawks will directly eat your birds, as will raccoons, weasels, foxes, and whatever else you have in the area.

Crows are very smart, so the only thing you can do is annoy them away. Hanging CDs or other shiny objects from strings, so that they flash in the light, may annoy them somewhat.

I’m no chicken farmer, but don’t some yards/coups have special netting over the area to keep chickens in and predators out?

If they’re in a pen that’s small enough for this to be doable, I recommend putting some sort of wire or netting cover on it. The least expensive way would just be to cover it with a network of string or twine. The strings or netting will confuse any medium-to-large birds that want to land inside, and they will leave it alone. If your chickens are free-range or in a large pen, this method probably isn’t feasible. If the crows are getting into the coop itself, you could try using a smaller door, but they would probably figure that out fairly quickly.

We had a similar problem with our dog squeezing into the pen through the small chicken-sized door and eating the feed. We had to make the door narrower, too narrow for the dog but still okay for chickens. It was either that or wait for the dog to get too fat from the extra food to squeeze in. Probably doesn’t help with your crow situation.

I have been raising chickens for around 15 years now, I’ve never seen any crows trying eat their food but here are a few things I do to make my chicken coop predator proof or crow proof in your case. I keep my chicken coop in the middle of a dog fence with a bird net on top to keep out hawks and foxes, my main coop is light weight racoon and rat proof. A cheaper option is just feeding your chickens twice a day morning and night using an meatal feeding bowl I don’t believe the crows would bother fighting the chickens for their food. I hope this helps, if you have anymore questions about raising chickens I would love to help!

Unsure but would a scarecrow help?

I haven’t heard of a crow problem before but I’m not surprised. In my area (Swarthmore, PA) we have hawks that have developed a taste for chickens so screening on the top is a must. Pics of my chicken run and coop in case of interest. I have all sides of run covered with chicken wire and much stronger fencing. The chicken wire alone is not good protection against raccoons, hence the fence wire addition. The only things that get in (so far) are wrens. If you’re only concerned about crows then you might be able to get away with much cheaper options like netting designed for fruit trees. 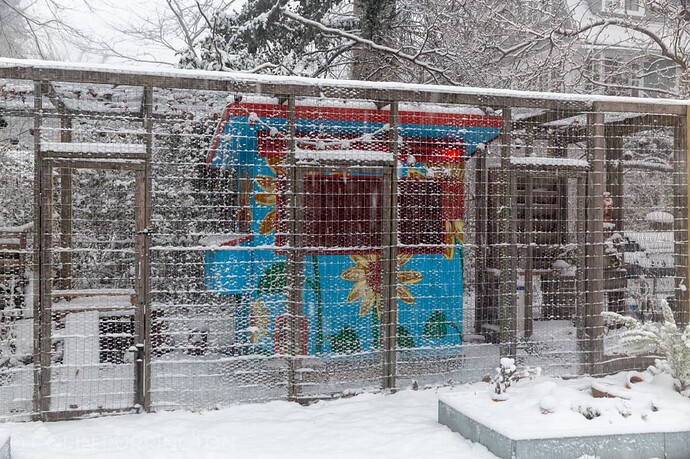 The local bird seed store sold fake crows and ravens. The instruction was to deploy them in a dead looking position; eg. lying down, hanging upside down, etc. See, the idea was that crows sense that a dead crow means danger; so they will stay away. I tried it and it sort of worked. For added verisimilitude, I tried sticking a raw chicken wing under it to make a dead bird smell. But, the local scavengers kept stealing it.

Anyhoo, the crows stayed out of my yard, but they were still close enough to disturb the peace.

thanks guy but my chickens freerange so we need to leave the coups open.

Then everyone can go and eat them, you either need a protected enclosure or they’re always in danger, try placing disks and scarecrows as was suggested, but it won’t help with land predators.

I don’t know if that helps, actually. The thing that gives the scarecrow away is the lack of acting like a human. Supposedly it’s more effective if you shift it around regularly and leave a radio to play nearby so it seems as though it’s someone doing things.

crows are smart and are hard to defend against due to their tendency to act in groups.

my first thought is that you need a guard animal, and my first choice for such an animal would be something like a well-trained dog. alternatively, i would think a mean rooster might work, though a rooster may have more potential drawbacks than a dog. i’m trying to think of other animals that might be good guards, and i don’t think there are any other good options… (cats would have obvious issues, i don’t think bigger birds would protect against crows, llamas probably wouldn’t care about chickens, etc.)

regarding scarecrows, since crows are known to be able to distinguish between different humans, i wonder: if a you put a particular mask on the scarecrow and then used the same kind of mask over your face when scaring them off (or if you walked around in the mask with a fake dead crow), would that make the scarecrow scarier to them?

besides that, the only other thing i can think of is to do some sort of technology hack… like have a microphone hooked up to a computer or other device that is programmed to listen for crows, and then sound some sort of alarm or trigger some sort of deterrents…

And even if you frequently move it, they still might not fall for it.

Not even the scarecrow from “The Wizard of Oz” could scare away a crow.