How do spiders build webs so far between trees?

https://www.inaturalist.org/observations/97168311
This spider was 15 feet off the ground, and 10 feet away from each of the trees it was anchored to. How did it bridge the 20-foot gap between those trees to build a web between them? Especially considering it’s of a size and body type where falling might kill it.

These things are terrible. They have every right to exist as animals, and I have nothing really against them, but also I do not like how easy it would be for me to accidentally get one of these to fall on my head. If I walk into the web-to-ground supporting thread and scare one enough to make it drop, I’m going to scare myself into next week.

It depends a lot on the specific situation. For long gaps that they can’t traverse dragging a line they’ll sometimes float a line out on the wind with a sticky bit on the end of it. This attaches, they pull it tight, and make the crossing spinning a stronger line as they go. This becomes the brace for the rest of the web.

Spiders, even very large ones, are still small enough that a fall is unlikely to injure them due to the square cube theory. Haldane’s excellent 1926 essay goes into this in very approachable detail.

The spiders aren’t terrible, they’re fantastic. Just keep an eye out for them, and carry a thin stick a bit longer than waist high, or a bit longer, and use that to gently clear your areas if you’re concerned about the webs and spiders.

I actually took a couple photos of an orbweaver casting the bridge thread. Part of the web-making process I don’t see very often. 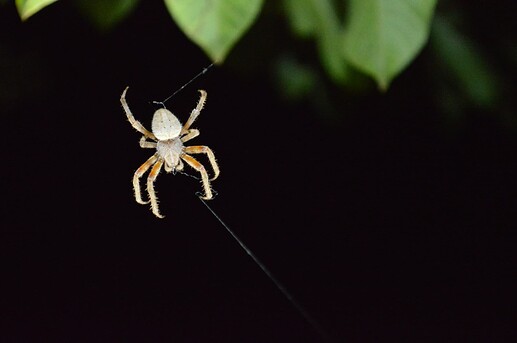 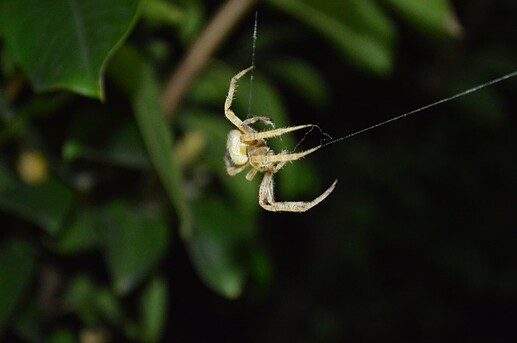 Ah, that makes sense, thanks.

I’ve seen a couple of orb weavers that seemed to have died from falling onto something hard. That abdomen can wind up pretty heavy, and I know tarantulas can be injured by bad falls.

Don’t get me wrong, spiders are great. I’m just very much not a fan of open clearings coming with booby traps. I need my hands for photography, and I hate to destroy their webs anyway. If only they were a bit more visible so I could walk around them more easily.

Having retired from a 40-year career as a wildlife biologist in the same region as your encounter, I know precisely the issue you describe. See, for instance,
https://www.inaturalist.org/observations/1930495
I’ve always assumed that the spider puts out a single wispy thread of silk that is caught by the wind and attached (almost randomly) to another tree on the far side of a canopy gap. That’s all the “toe hold” it needs to begin the process of constructing the rest of the web. But that’s speculation on my part.
I don’t want to creep you out, but I can recall a few occasions where I accidentally planted my face into the web of one of those Giant Lichen Orbweavers, but typically the spiders spend their daytime hiding off to one side or the other. I only gained a “rider” on me on one occasion that I recall. I usually accomplished my field work (monitoring endangered songbirds) walking through the habitat while twirling a twig or leafy branch in front of me to clear a pathway through the silk!

This one walked across my forehead. Had another on the curtain next to my head last night. No web needed … sweet dreams.
https://www.inaturalist.org/observations/132960002

Pretty sure spiders also use electromagnetism to fly those threads to distant targets.

Laughed at the “a bit more visible” comment. They are trying to catch things and you’re not the only one with eyes.

Intellectually, I know very well that their web needs to be invisible. But the arachnophobe part of me would prefer that they make their web of something else, maybe out of that day-glo line flyfishers use sometimes. Why can’t nature bend to my whims???
(joking)

These critters, unfortunately, perch in the very center of the web. I assume it’s so they don’t have to run 10+ feet to go catch whatever hits the web, but it does mean that they’re primed to fall right smack on top of someone.

I wonder why these build out in the open this way? Maybe it’s so they can catch dragonflies.

I was netting butterflies in some fields and found a yellow garden spider (Argiope aurantia) crawling up my leg, the name sounds unassuming, but the spider is not. They’re pretty harmless though.

This species makes a zigzag in the center of its web, which the purpose is disputed but, to your point, may serve to make it more visible to deter birds from flying through it.

I feel yellow garden spiders stick below face height and often close to the ground at least, so I usually don’t run into them face first

Their size triggers my arachnophobia more than the (around here at least) smaller orb weavers in the forest. But at least for me personally they are still not nearly as bad as wolf spiders (Tigrosa aspersa) and fishing spiders (Dolomedes tenebrosus)… those latter two seem to be the spider shape and size my brain is most hardwired to react in terror to for some reason. They don’t build large nets though so are less of a “problem” walking through the forest.

Pretty sure spiders also use electromagnetism to fly those threads to distant targets.

That is for ballooning, meaning when the spiders uses it´s silk threads to take off and get to new habitats.
I am not really sure how that would work for bridging, which is the process in question here, perfectly described by earthknight. Where the thread attaches itself is pretty random and depends on the wind situation for example.

I find it hard to believe that the silk used for bridging would be immune to gathering electrostatic charge. It’s pretty much a result of being out in the air. I also just read that the glue is electrically conductive and will move towards objects.

Also discovered that an old friend/colleague is doing some of this research.

Interesting! Can you share the source on this fascinating fact?

Ah, the sprinting kinds! Those are also the kind that are best at arriving quickly onto your person, especially if a fishing spider decides to climb your leg while you’re in a pond.

Personally, the ones that really get me are the fat-bodied orb weaver types with the long spindly legs. They can be really pretty when they’re not moving, but as soon as they start crawling, eegh. It’s the motion that does it.

(Again: I like spiders, and they have as much right to live as any other animal. It’s not their fault I have a phobia. But I do have a phobia.)

Back when I was more interested in physics, I read something about spacecraft collecting charge on tethered objects. Ah, like this. https://en.wikipedia.org/wiki/Electrodynamic_tether
I remember the charge being a problem but it seems engineers have found uses for it. Collecting charge is just a consequence of moving a conductive material through a magnetic field or charged particles.

My mind is a garbage heap of mostly useless info.

Thank you.
You may be surprised at how seemingly useless heaps of information coalesce into coherent and meaningful ideas in a Eureka! moment.

While hiking in a valley in King’s Canon in California in the 90s, I saw spider webs stretching across the valley from one mountain peak to another, way above my head. At first I thought I was seeing things. But the forest ranger confirmed I was seeing spider webs. He said they were gossamer spiders, which was probably just a term for spiders who seem to sail long distances on the wind currents. I felt lucky to have seen these gossamer webs!

As a youngster I used to love lying on my back on our porch in the sunny summer days and watching the spiders ballooning. Sometimes the whole sky would just be filled with them, hundreds of feet up - you could only see them by the tiny glints when the sunlight hit the webs just right.

I haven’t seen them so numerous in a long time though. Maybe that was just a really good spot, or maybe I’ve forgotten to look enough.

Here’s what it looks like, for the curious: https://www.youtube.com/watch?v=iOtw8oMLf8A

4 Likes
Naturalists ruin everything - what have you ruined for your friends?
next page →