Figure out a way to have the prominent Location and buried Place search fields combined into a single search field and still work well. I know some non-power users who don’t understand the difference between the two fields and some don’t even know there are two.

Something along these lines does need to be done. The “place” versus “location” confusion is very frustrating to new users. At the least, the explanation of a Location in Google Maps versus a Place in iNat needs to be more prominent.

This may be a small thing, but it’s one that has bothered me for a while…

If I have obscured the location of an observation, looking at the observation itself shows me the exact location in the small map on the right, because it’s my observation. But on the Explore page, it shows that same observation in the random obscured location, even though I have permission to see the real location. When using the Explore map in areas I frequent, this adds extra clutter by displaying a bunch of (my) observations in the wrong place.

Also, Explore page does not recognize some “locations” that are available on the Observation page.

I mentioned it in another post but am bringing it here for neatness(?): is it possible to have boundaries for countries, states/provinces and counties on the Explore/My Observations map like there are on the taxa maps? It could help narrow down some underreported regions and could help with more competitive naturalisting

Taxonomic sorting would definitely help with a lot of things! Maybe it could be a switch on List mode like how we’ve got one for observation date/time and upload date/time

I don’t think any cartographer or information designer would ever create an interactive search tool that actually obscures so much of the search results in this way. For me, it slows down exploration and research. It’s frustrating. This is design for decoration, not for the benefit of the user (but perhaps caused by a simple map module’s default settings that couldn’t be changed?)

If necessary, make the map a bit smaller in order to fit the observations list and other buttons in their own separate area of the page. A smaller map area completely free of obstructions is far better than a larger map that’s 20% or more hidden.

Thanks for seeking input on this!

Sort taxonomically. If I want to see the “snakes” I’ve observed it would be much more useful to see them arranged in some order (taxonomic preferable, alphabetic okay) other than date observed or date added.
Or sort alphabetically within a taxon. I’ve wished for this since I began using INat last year. For example, if I am searching on the observation page for Cyperaceae, currently provides the recent observations in the last date added order (currently only possible to sort by date added, date observed, or faves.). It would make it much more useful (to me at least) to have an option to sort alphabetically so each genus would be in alphabetical order say, within a family, and within each genus each species. Much easier to look over a large number of observations without having to manually search each individual species. Take a large genus such as Carex - much more helpful to see observations by species (could subdivide into subgenus or section, but that could be daunting and not critical) - alphabetical would definitely work.
I can see where this might not be so useful under the general “explore” tab as there could be way too many observations so the first screen might only show a single species when sorted this way, but under the “your observation” tab I would find it extremely helpful.

I would echo the suggestions to remove all of the lists and controls from the map, and to provide a function to define search areas with shapes (rectangle, circle, polygon, etc). Making those changes would fix one of my main complaints about the current map, which is simply that I don’t find the wide, skinny shape to be very useful.

Also on my wish list would be providing the ability for the user to customize the symbols displayed on the map, as can be done on sites such as Calflora (https://www.calflora.org) and SEINet (http://swbiodiversity.org/seinet/index.php). An example use case would be to explore all observations of a genus with a different symbol for each species, but potentially could be extended to use different symbols for observation date, annotations, or any other available data.

On any map. I find it useful to have some sort of symbol that indicates the center of the view, this helps to see exactly what I am zooming in on when changing magnification.

As mentioned previously I would like to see more simplified, text-based lists in alphabetic or taxonomic order. I would also find it useful to see the count of observations of each taxon in the lists.

I too would love a filter for observations with comments, the ability to draw custom polygons, a fix of the thumbnail duplication bug, and the warning reuvenm describes in his bullet point 2.

Also, please leave the thumbnails at the current size, or else allow the user to select preferred size—I really appreciate Explore’s larger thumbnails! I rarely use Identify because scrolling through tiny thumbnails is pretty useless for many insect searches.

Like @tonyrebelo , I’d love to see an indication of how many total observations have been made by whom. For species with very few observations, there may be a number of identifiers who have identified just two or three observations, if that; it can be difficult figuring out who, if anyone, has enough expertise to be solicited for ID help. Meanwhile, there may be some user who has identified ten or twenty observations of the species, but only his own, and who thus doesn’t even show up when you search for identifiers. This is one of those aspects of iNat that currently don’t work as well for those not based in North America (where a higher percentage of species have sizeable observation totals, and thus higher numbers of identifiers).

Oh, and I think it bears saying (given we’re discussing all the things that annoy us about Explore, and that we want changed): Explore is fantastic!! I have gotten so much wonderful use out of it while searching for possible species matches; I remember how much harder it was to identify moths (my favorite taxon for which I had no field guides) in the days before I discovered iNat. I would appreciate iNat even without Explore, but would get far less benefit from it. So cheers for Explore and everyone who helped develop it!

I like your ideas, but this display should be an easily available option and the user should be able to choose it as the default. In addition to being more usable for experts and for people reviewing a great many observations at once, it should work much better when bandwidth is low or data transfer is slow. That in itself would expand the useful reach of the application—for everyone. It would also improve accessibility for many people with disabilities.

So, great thinking, but it shouldn’t be the only approach. On the other hand, this view should be easy to provide. You’re asking for a focus on data over design. Displaying data in scrollable and page-able (is that a word?) tables takes very few lines of code. To turn your preferred presentation into a graphics-based presentation that would work for other types of users is where the design challenges lie and, with them, the need for more elaborate coding. Fortunately it is possible to have one system deliver both products.

Add a user interface – even if buried into a new section of Filters – for some or all of the more obscure search options that we currently would need to edit a URL to use.

I’ll cast another vote for exposing as many of the excellent search parameters as possible through the UI. It’s fine to have these in an Advanced Filters section. Ideally, iNat’s devs will implement this section of the UI in a some extensible way. That way, if iNat adds additional search parameters (e.g. elevation range) they can be incorporated into the search UI with little effort.

I would also like to be able to restrict the search for a taxon to the taxon alone, and not to all its descendants… For example, if I am looking for the genus Platybunus, I would like to be able to specify whether my research concerns all observations related to the genus or to one of the species of the genus, or only those where the genus alone is specified…

Bring the buttons and observations outside the map so they’re not covering it.

I also would like to suggest to maximize the map by removing the page footer which is very large, making the map far from being a square (a square would generally be better for the “Redo search in map” feature). This is a screenshot of my whole 1600 x 900 screen (F11 to maximize the browser, to better show the surface usage): 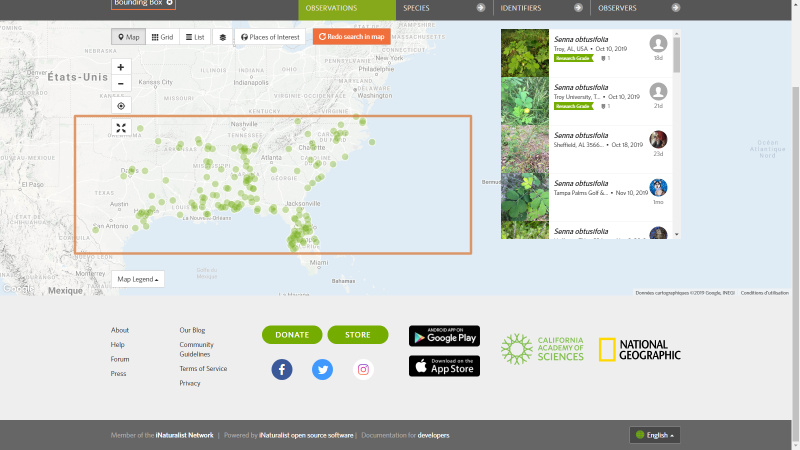 You can see how much space is swallowed by the footer, compared to the map, and you can see that the bounding box obtained with “Redo search in map” is far from a square.

Shouldn’t the map be a popup?

I would also like to be able to restrict the search for a taxon to the taxon alone, and not to all its descendants

Unless I’m misunderstanding you, this is already possible. For example, if you just want observations at the genus level, choose Filters-> Rank -> Low = genus. Then you get this search: https://www.inaturalist.org/observations?lrank=genus&place_id=any&subview=grid&taxon_id=466517. More search tips here: https://forum.inaturalist.org/t/how-to-use-inaturalists-search-urls-wiki/63

Assuming Your Observations is considered part of Explore, it is a filtered view of the same page after all, then please ensure the batch edit tools under edit observations under your profile are incorporated if that is scheduled for removal.

i don’t know if anyone else feels this way but i dislike and barely ever use the ‘full screen’ map mode despite my obsession with maps. Full screen mode blocks all of the other tabs and bars and so i don’t like it. If it just expanded to the whole browser window area i’d use it more.

Unless I’m misunderstanding you, this is already possible. For example, if you just want observations at the genus level, choose Filters-> Rank → Low = genus. Then you get this search: https://www.inaturalist.org/observations?lrank=genus&place_id=any&subview=grid&taxon_id=466517. More search tips here: https://forum.inaturalist.org/t/how-to-use-inaturalists-search-urls-wiki/63

Thanks for the tip… Another function whose purpose and interest I had not grasped…
It is not easy to understand the subtleties of the help, when you don’t speak fluent English!

I would echo the suggestions to remove all of the lists and controls from the map, and to provide a function to define search areas with shapes (rectangle, circle, polygon, etc). Making those changes would fix one of my main complaints about the current map, which is simply that I don’t find the wide, skinny shape to be very useful.

I definitely agree with this suggestion